We have laid the groundwork for lasting peace in Mindanao — PRRD

Since its establishment, the Bangsamoro government has fulfilled its commitments under the political and normalization tracks of the Comprehensive Agreement on the Bangsamoro (CAB).

In his remarks made during the celebration, President Rodrigo Roa Duterte reaffirmed the national government’s continued support to the Bangsamoro peace process, as he pledged to honor all signed peace agreements.

“As I have promised during the early part of my term, we  have lay the groundwork for lasting peace and progress in Mindanao,” President Duterte said.

“Be assured that this administration will remain determined in its commitment to support self determination, uphold human rights and advance social welfare in the Bangsamoro region,” he added.

Moral governance amidst the pandemic

Barely a year since its creation, the COVID-19 pandemic struck, which became the first major test of the BARMM government.

Amid the challenges brought about by the pandemic, and the concerns it faced during the transition period, the Bangsamoro government demonstrated a firm resolve to perform its mandate. 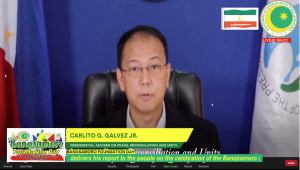 “No one foresaw that your second year of running the affairs of government would be this challenging. The COVID-19 pandemic pushed all us to our limits, putting our health and safety on the line,” said Presidential Peace Adviser Carlito G. Galvez, Jr. in a pre-recorded message for the event.

“However, the manner in which the BARMM Government has courageously confronted this health crisis, while decisively addressing issues of governance during this transition period, is a testament of your commitment, foresight and determination to make the region a place where all Muslims, Christian, and Indigenous Peoples can live in peace, harmony and prosperity,” Galvez added.

Government Implementing Panel Chair for the Bangsamoro Peace Accord and Office of the Presidential Adviser on the Peace Process (OPAPP) Undersecretary David B. Diciano highlighted the significant strides the Bangsamoro government has achieved, which are anchored on the principle of moral governance. 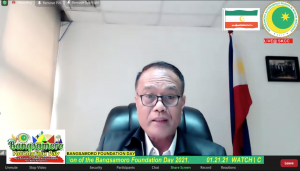 “Moral governance has become not just a banner statement, but a guidepost for the Bangsamoro bureaucracy, as the regional government works towards the establishment of key institutions, enactment of priority codes, and constitution of offices, all towards putting life and spirit to the aspirations of the Bangsamoro for meaningful and genuine autonomy,” Diciano said.

Defense Secretary Delfin N. Lorenzana declared his support for the BARMM, saying: “When the plebiscite [was] finished, I rejoiced because finally peace and stability is at hand in our land. Rest assured that the BARMM will always be my priority as we aspire to resolve the decades-long armed conflict in our region.” 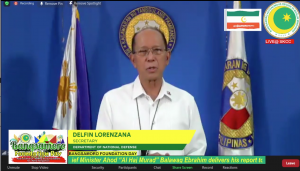 “We are one with you and we are in solidarity with you in your continuing quest for moral governance and in building strong foundations for a better Bangsamoro,” said Budget and Management Secretary Wendel Avisado in his message of support. 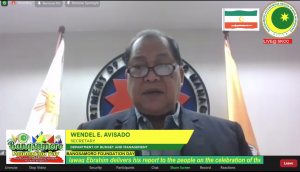 State of the Transition Period

In particular, Ebrahim detailed the priority legislation the regional government had passed such as the Bangsamoro Administrative Code (BAC), as well as other codes that are at varying stages of approval such as the Civil Service Code, Local Governance Code, Education Code, Electoral Code, and Revenue Code.

He also highlighted the major accomplishments of the various ministries which included the increased revenue collection of the Ministry of Environment, Natural Resources and Energy (MENRE); the growing number of Seal of Good Local Governance Awardees in the region; and the introduction of the Expanded Bangsamoro Advanced Road Mapping and Management (E-BARMM) System spearheaded by the Ministry of Public Works, among others. 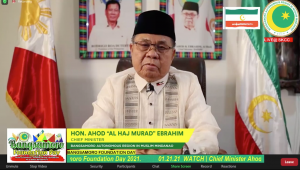 “The significant improvement in terms of peace and security in the Bansgamoro have boosted the confidence of investors and enhanced other economic drivers in the region,” Ebrahim said.

“The establishment of the Autonomous Government is not an end but a mere continuation of our struggle. It is important to constantly remind ourselves that what we achieved so far is founded on the blood, sweat, and tears of our brethren, our mujahedeens, as well as the people and communities who went through so much pain and suffering for the sake of our struggle,” he pointed out.

According to Ebrahim, “giving honor and justice to these sacrifices are precisely the main considerations in the normalization process of the peace agreement.”

BARMM Executive Secretary Minister Abdulraof Macacua shared that it has been his vision to ‘rejoice’ and ‘reflect’ the triumphs of the Bangsamoro region. 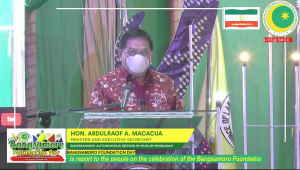 “Now I am glad that I am standing here with all of you and with our Bangsamoro flag already rising high side by side with the flag of the Republic of the Philippines,” Macacua said, as the Bangsamoro flag was raised for the first time to celebrate the occasion. 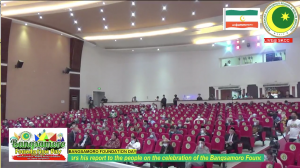 The BARMM’s second year founding anniversary is being celebrated through a week-long service caravan led by the regional government’s various ministries. END