PASAY CITY, Philippines — The Office of the Presidential Adviser on Peace, Reconciliation and Unity (OPAPRU) recognized 38 of its peace partners during ceremonies held on Monday here at the Philippine International Convention Center.

The occasion highlighted the crucial role that individuals, organizations and institutions have played in pushing forward the Comprehensive Philippine Peace Process under the Duterte Administration over the past six years.

In particular, the OPAPRU honored stakeholders for helping the agency implement programs and projects that are now enabling former combatants to successfully reintegrate into mainstream society and live as peaceful and productive citizens.

“We have been able to achieve all these major milestones because we have worked hand in hand and moved in the same direction. This has been the formula of our success,” OPAPRU Usec. David Diciano said in his opening remarks.

“This is not to say that our peace journey does not have its share of challenges. There were a lot of trials along the way but we managed to overcome them because we are united by a common goal,” Diciano added.

The following were the awardees under Policy, Governance, and Strategic Planning Service (PGSPS):

The awardees under the MNLF Concerns Department (MCD) were:

The awardees under the GPH – CBA-CPLA Peace Process were:

In his closing remarks, Presidential Adviser on Peace Reconciliation and Unity Secretary Carlito Galvez Jr. said he hopes the agency and its various peace partners, will continue to build on the partnership they been built and nurtured over the years.

“From line agencies, to local government units, to civil society organizations, to the academic and security sector, it is through your unwavering commitment and steadfast support that we have come this far and achieved major milestones along the way,” Galvez said. 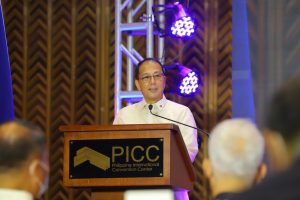 “Through our strong partnership, your members are now enjoying the dividends of peace and development,” Galvez said.

He stressed that “with OPAPRU’s expanded mandate, our agency will not only be implementing peacebuilding interventions, but will also be carrying out initiatives that aim to bring healing and reconciliation among our people.”

“As we help transform the lives of our beneficiaries, we are also transforming as an organization. And we have been able to do this because we have all of you, our peace partners, by our side,” Galvez said.

As the administration of President Duterte nears its end, the peace adviser recalled the vow Duterte made to the Filipino people six years ago, and that is, to honor all the commitment made by the national government under all signed peace agreements.

“We are proud to say that the President has fulfilled that commitment and is leaving behind a legacy that his administration can be proud of – a legacy of peace that is now being felt by each and every Filipino,” Galvez said.###