This was the message of Presidential Peace Adviser Carlito G. Galvez Jr., as he led the national government in turning over 16 core shelter housing units to a Peace and Development Community here in the island-province on Thursday. 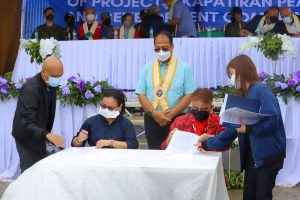 According to Galvez, the economic development now being experienced in the province is a result of the strong collaboration between the different line agencies, local government units, and members of the the Rebolusyonaryong Partido Manggagawa ng Pilipinas/Revolutionary Proletarian Army/Alex Boncayao Brigade-Tabara Paduano Group (RPM-P/RPA/ABB-TPG)  – now known as the KAPATIRAN –  who are the beneficiaries of the project

The Office of the Presidential Adviser on the Peace Process (OPAPP), now called the Office of the Presidential Adviser on Peace, Reconciliation and Unity (OPAPRU), the Department of National Defense (DND), and the Armed Forces of the Philippines (AFP) signed a Memorandum of Agreement in 2017, and subsequently amended in 2019, for the provision of 52 core shelters to the Peace and Development Communities (PDC) located in Ibajay, Aklan, Kabankalan City, Negros Occidental, and the triboundary site between the Municipality of Amlan, Sibulan, and Tanjay City, Negros Oriental.

Jorgen Maglunob, a father of five, expressed his gratitude to the government for delivering its commitment to the 2000 Peace Agreement. 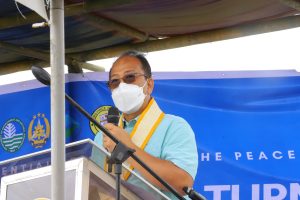 In addition to the core shelters, the government and KAPATIRAN members also witnessed the ground-breaking ceremony for the construction of an Emergency Food Reserve (EFR) in the PDC, and the ceremonial signing of Memoranda of Agreement for the construction of an Integrated Cocomill Facility, partnership for monitoring and evaluation of KAPATIRAN interventions, implementation of the EFR project.

The projects are a collaborative effort between the OPAPRU, Department of Science and Technology, Provincial Government of Aklan, Aklan State University, and Central Philippine State University.

Department of Environment and Natural Resources Undersecretary Ernesto Adobo Jr. shared that his agency will be donating additional tracks of land where the cocomill facility will be built.

“’Yong 52 hectares may not sustain the raw material needed for the cocomill. Therefore I was told by my Secretary (DENR Sec. Jim Sampulna) to inform the governor, the mayor, and especially the PO that we will be adding 100 hectares to your 52 hectares,” Adobo said. 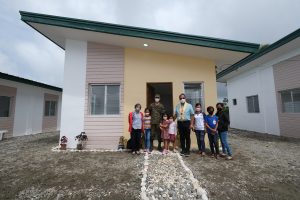 Meanwhile, Aklan Governor Florencio “Joeben” Miraflores highlighted the KAPATIRAN’s instrumental role in the development of the Aklan’s tourism industry, noting that it was the organization that helped secure their once impassable highway from Aklan to Bocaray.

“It was here in Ibajay that the peace agreement took its root. I say this because the KAPATIRAN has been part of the development of our tourism industry. Wherein before that, [the] highway leading to Boracay has several incidence of bombing, burning of buses, and it was not safe then to go to Boracay,” Miraflores said.

“It was through the efforts of the KAPATIRAN wherein the highway became a passable highway for tourists. I always say this: without the KAPATIRAN’s commitment, we would not have reached the tourism development of the province of Aklan, and we would not have made Boracay as a prime tourist destination of the country and of the world,” Miraflores added.

The provincial leader also said that since the peace agreement was forged, no insurgency-related incident in their area has been recorded.

“Let us applaud the KAPATIRAN’s commitment for peace because since the signing of the peace agreement, there was not a single insurgency-related incident on that highway from Kalibo on the way to Boracay,” he said.

For her part, KAPATIRAN Member and Co-Chair of the Joint Enforcement and Monitoring Committee (JEMC) Veronica Tabara thanked the national government for its commitment to sustaining the peace process with the KAPATIRAN, particularly by ensuring the successful implementation of the peace deal forged between both parties in December 6, 2000. 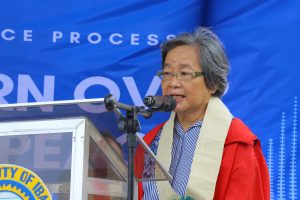 The peace deal was further strengthened through the signing of the Clarificatory Implementing Document (CID) that established the Normalization Program for the former rebels, which has helped in their successful transition to becoming peaceful and productive members of society.

Galvez said that as the May 2022 elections draws near, all presidential candidates need to look into the success stories of the peace processes and agreements that were forged between the national government and revolutionary groups over the years, and sustain the gains that have been achieved.