DAVAO CITY — In his inaugural address in 2016, President Rodrigo Roa Duterte assured the Filipino people that his “administration is committed to implement all signed peace agreements in step with constitutional and legal reforms.” 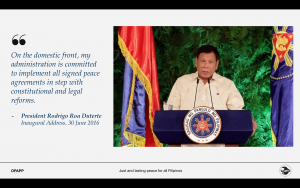 True to his word, major milestones have been achieved under the comprehensive Philippine peace process – from the highland Indigenous People’s communities in the Cordilleras, to the sprawling flatlands and island-provinces of the Bangsamoro region in Mindanao.

These peace milestones were highlighted by Presidential Peace Adviser Secretary Carlito G. Galvez, Jr. in his presentation during President Duterte’s Talk to the People public address early this month.

The creation of the BARMM and BTA are under the political track of the CAB. President Duterte threw his full support behind the Bangsamoro government anew when he signed Republic Act 11593 which extended the transition period of the BTA until 2025. 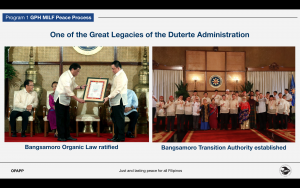 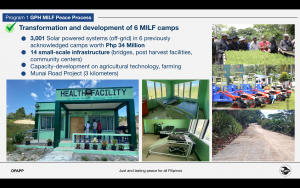 To date, a total of PhP 1.7 billion in transitional cash assistance have been given to the decommissioned combatants, while social assistance packages and social services worth PhP 2 billion have also been provided to them.

Initiatives under the security component of the normalization track are also gaining traction, as 14 private armed groups in the BARMM and Region 12 have been disbanded through the National Task Force for the Disbandment of Private Armed Groups (NTF DPAGs).

Towards full realization of the 1996 Final Peace Agreement

The Duterte administration, through OPAPP, is also working to sustain the gains made under the Final Peace Agreement it signed with the Moro National Liberation Front (MNLF) in 1996.

These coordinating committees will focus on pursuing the implementation of the remaining agreements made under the FPA with the assistance of the Organization for Islamic Cooperation (OIC). 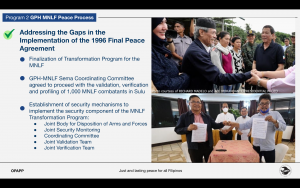 “In response to gaps in the implementation of the 1996 FPA, a transformation program for the MNLF is currently being developed,” Galvez said, adding that the security mechanisms have been established and shall be fully functional by 2022, while the validation, verification, and profiling of MNLF combatants which are a prerequisite for the delivery of initial socio-economic interventions will start by the first quarter of 2022

Through the government’s partnership with the MNLF, he said the peace and security situation in the island province of Sulu has significantly improved, making it a safe haven for those who have turned away from a life of violence and want to start anew.

In support of the National Task Force to End Local Communist Armed Conflict (NTF-ELCAC), OPAPP, in partnership with the Department of the Interior and Local Government (DILG), are carrying out localized peace engagements. 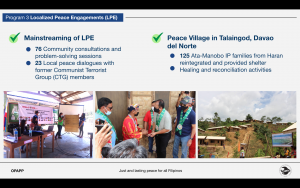 Galvez also reported that OPAPP, in partnership with the Davao del Norte provincial government, has established a peace village in the province that will benefit 125 indigenous people’s families that were displaced due to CTG-initiated atrocities.

Galvez also cited his accomplishments as the Cabinet Officer for Regional Development and Security (CORDS) for Region 3, particularly on the interventions that were carried out against the CTG using the Whole-of-Nation Approach. 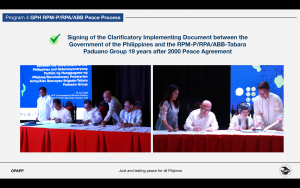 Nineteen years after the signing of the 2000 peace agreement between the government and the RPM-P/RPA/ABB, the parties signed a Clarificatory Implementing Document (CID) which has been crucial in the transformation of the organization’s members.

Under the three-year Normalization Program for the RPA or KAPATIRAN, a total of 727 members have already undergone the decommissioning process.

Meanwhile, a five-year Normalization Program for the members of the Cordillera Bodong Administration-Cordillera People’s Liberation Army (CBA-CPLA) is also being implemented, which covers the decommissioning of 1,558 CPLA members and the destruction of 339 of their firearms.

In support of the national government’s interventions under its various peace tables, OPAPP is also implementing the Social Healing and Peacebuilding (SHAPE) and the PAyapa at MAsaganang PamayaNAn (PAMANA) Programs.

The SHAPE Program aims to cultivate the culture of peace, contribute in the prevention of violent extremism, and provide continuing support in the rehabilitation of Marawi and the conduct of healing and reconciliation interventions in conflict affected communities. 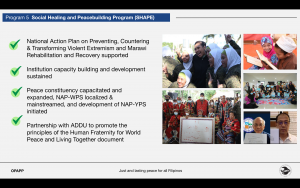 In particular, the program is focused on assisting vulnerable groups such as women, youth, and Indigenous Peoples (IPs) by localizing and mainstreaming the National Action Plan on Women, Peace, and Security (NAPWPS); developing a National Action Plan on Youth, Peace and Security (NAPYPS); and conducting peacebuilding programs in accordance with the Human Fraternity Document signed by the Pope and Grand Imam of Al-Azhar Ahmad Al-Tayyeb.

The PAMANA Program, on the other hand, is implementing various socioeconomic projects in geographically isolated and disadvantaged areas (GIDAs) such as farm-to-market roads, agricultural infrastructure, water projects, and livelihood assistance, among others. 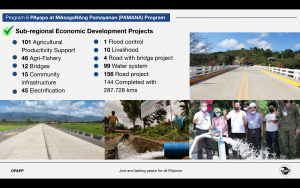 More than 2,400 community-driven development projects and 1,300 sustainable livelihood projects have been implemented under PAMANA.

Meanwhile, Galvez reaffirmed OPAPP’s unwavering commitment to help bring a just and lasting peace for all Filipinos through the various peacebuilding initiatives it is implementing in collaboration with its peace partners.

Galvez emphasized that under President Duterte’s leadership, the peace processes with the various revolutionary groups have been instrumental in strengthening the peace and security situation in the country.

The peace adviser noted that peace agreements are now helping to transform former combatants and their families into peaceful and productive individuals, and conflict-affected communities to peaceful, developed and resilient communities.

“The Duterte Administration has established a strong foundation in the implementation of the signed peace agreements for the next administration to build upon and sustain the gains of peace,” Galvez concluded.

Meanwhile, the peace adviser thanked President Duterte for issuing Executive Order No. 158 on December 27, 2021 which formalizes the transition of OPAPP to the Office of the Presidential Adviser on Peace, Reconciliation and Unity (OPAPRU).

“We are grateful to President Duterte for supporting OPAPP’s bid to make the transition to OPAPRU. This is a major milestone for our agency, as it continues to push forward and sustain the gains of the comprehensive peace process,” Galvez said. 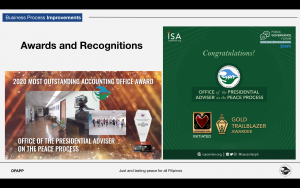 “Beyond its new name, our office would like to demonstrate that as it transforms the lives of its beneficiaries – former combatants, their families and their communities – it is also transforming itself as an organization,” he explained.

Proof of this transformation, Galvez said, is the recognition the agency has received such as being named by the Commission on Audit as one of the most outstanding accounting offices in 2020 for the “fairness of its presentation of its financial statements.”

The agency also received the Silver Trailblazer Award, as it moved from the Initiation stage to the Compliance Stage during its Performance Governance System (PGS) Public Revalida held earlier this month.

“As our agency evolves, we would like our peace partners and stakeholders to be part of this transformative process. This is the essence of our whole-of-society approach in peacebuilding,” he said. ###