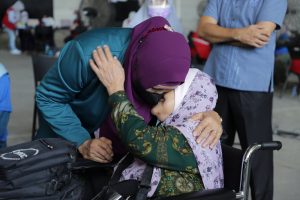 “Let’s support this decommissioning process. Let’s not rush because we are in a pandemic so this process is a bit delayed. But In Shaa Allah, now that our health protocols are eased, the process of decommissioning will continue to flow, ” Silongan said.

“Let us wait, those who have not yet started decommissioning. Don’t hurry because we are going through many challenges but all of this also has an end, In Shaa Allah. We can overcome this, In Shaa Allah, ” she concluded.

Peaceful transition after decades of struggle

(During the height of the unrest, we were in Damakling, it was only during nighttime that we could go home because when the plane was bombing in the morning. We were just under the wells. Every night we go home.)

Even to this day, she teaches as an Ustadza in their local Madrasah where she receives a monthly allowance of PhP 1,000.00. Although she admitted that her family struggles with their meager income from selling bananas and the allowance from her teaching, they are still able to make ends meet. 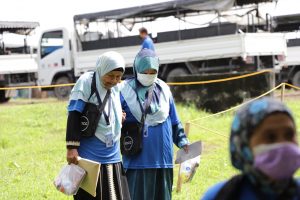 According to Silongan, she will use the money to finish the construction of their house, and for their day-to-day needs.

“Natutuwa ako dahil nakatanggap tayo ng kaunting grasya mula sa Allah SWT (I am glad because we have received a little grace from Allah SWT),” she shared, while beaming with joy and pride.

Silongan is also thankful that she is now reaping the fruits of the Bangsamoro peace process.

“Nagpapasalamat kami sa Allah SWT dahil nakapagpahinga na tayo, wala ng gulo, nakakakuha na kami ng mga supply galing sa BARMM (We are thankful to Allah SWT because we have now rested, there is no conflict anymore, [and] we are getting supplies from BARMM),” she said.

Faiza is hopeful that the next generation will have a brighter and better future, and that her grandchildren will no longer have to bear arms and engage in armed struggle.

(My dream for my grandchildren is for them to have a good livelihood because I am old. The time will come when I will leave them. I hope they will no longer fight. Maybe we have already surpassed the struggle. I ask Allah SWT that there will be no more chaos, that we have already overcome that.)

Sustaining the gains of peace in the Bangsamoro

The four components of the normalization track include socioeconomic development, security, confidence building measures, and transitional justice and reconciliation (TJR).

Under the socioeconomic development component, a total of PhP 1.7 billion in transitional cash assistance and PhP 2.5 billion in social assistance packages and social services have been provided to date to decommissioned combatants and their communities in support of their meaningful transformation.

To make the crafting of the CTP as inclusive and holistic as possible, the JTFCT conducted a series of camp core area assessments and resettlement area validations in March 2020 in Camps Badre, Abubakar, and Rajamuda.

These activities were followed by a series of community profiling. The JTFCT, along with BPDA-BARMM, have also developed a Camps Transformation Investment Program (CTIP) which is a part of the CTP.

On the Disbandment of Private Armed Groups (DPAGs), which is as part of the security component of the normalization track, 14 PAGs were disbanded through the collaboration of the National Task Force on DPAGs, local governments units, and the security sector.

In 2020, OPAPP signed an agreement with the Department of Interior and Local Government, the Armed Forces of the Philippines, and the Philippine National Police to operationalize the program on DPAGs.

To address the concern on unregistered firearms, OPAPP signed a Memorandum of Agreement (MOA) with the local governments of Basilan, Lanao del Sur, Maguindanao, Sulu, and Tawi-tawi in 2020 to launch a program on the management of small arms and light weapons (SALW).

Under the transitional justice and reconciliation (TJR) component, the Inter-Cabinet Cluster Mechanism on Normalization (ICCMN) has approved the proposed roadmap on TJR.

Under this roadmap, programs, projects, and activities developed by ICCMN TJR cluster member-agencies are based on the recommendations of the Transitional Justice and Reconciliation Commission.