PASAY CITY — Another 500,000 doses of Sinovac’s CoronaVac vaccines arrived in the country Thursday, April 22, the second tranche of the 1.5 million doses scheduled for delivery this month by the China-based manufacturer.

He noted that the “strong diplomatic relations” between President Rodrigo Duterte and Chinese President Xi Jinping was a key factor in the successful negotiations with Sinovac. 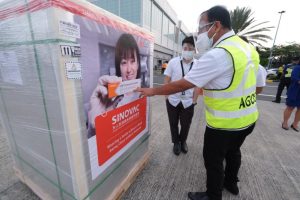 According to Galvez, the country’s excellent ties with China enabled the Philippines to secure “definitive [delivery] dates and a steady supply” of vaccines from the company.

The country has secured a total of 25 million doses of CoronaVac vaccines. Sinovac began its delivery of the procured vaccines last March with 1 million doses.

For the month of April, the first tranche of 1.5 million doses arrived last April 11 with 500,000 doses. The remaining doses committed for the month by Sinovac will arrive on April 29.

Prior to the delivery of the procured CoronaVac vaccines, the Chinese government had donated 1 million doses to the Philippines, which were shipped to the country in two batches last February and March. 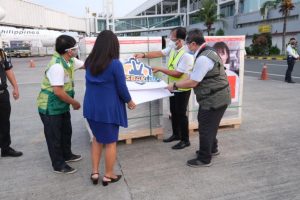 To date, a total of 3 million Sinovac vaccines have been delivered to the country.

The latest shipment was also pre-cleared by the Bureau of Customs and were immediately brought to Pharmaserv in Marikina for storage.

Galvez said all of the 500,000 CoronaVac doses will be deployed to all targeted implementing units within three days, and will be administered during a one-week period.

The Vaccine Czar also disclosed the deployment plan for the newest supply of vaccines, saying these will be “focused on Metro Manila and other high risk areas”.

He said 100,000 doses were allocated for Metro Manila, while the rest of the supply will be deployed in other areas that are experiencing a surge in COVID 19 cases, as well as economic centers.

These high-risk areas include cities and provinces in the ‘NCR Plus’ bubble, and select areas in Regions IV-A, III, II, XI, VI, VII, and CAR.

“We aim to achieve herd immunity in areas with a high attack rate, specifically in Metro Manila by October or November. This is also our commitment with the NITAG (National Immunization Technical Advisory Group),” he added. The Vaccine Czar said 500,000 doses of Gamaleya’s Sputnik V are scheduled to arrive beginning this month, in which 15,000 doses will be delivered on April 25, while the remaining 485,000 doses are expected by the end of the month.

According to Galvez, the Sputnik V vaccines will be deployed in the same target areas due to the brand’s “highly sensitive temperature and logistical requirement”.

Meanwhile, the Vaccine Czar committed that the next batch of CoronaVac vaccines will be equally distributed among the other regions in order for them to continue implementing their inoculation programs.

The government is currently conducting the simultaneous vaccination of priority groups A1, A2, and A3. These three groups include healthcare workers, senior citizens, and persons with comorbidities. END