LUNETA PARK, MANILA — Once the go-to place for promenaders and a major symbol of solidarity among the Filipino people, this park will soon be the site of a facility that will help heal patients stricken with COVID-19.

This developed as the national government and the city government of Manila will be working together to build a 336-bed Mega Field Hospital that will cater to mild and moderate COVID-19 cases.

The facility, which is expected to be completed in about 60 days, is in line with the Duterte Administration’s efforts to scale up the nation’s COVID-19 response and mitigation capacity through the construction of more health care facilities nationwide.

The initiative is a collaborative effort between the Department of Tourism (DOT) – National Parks Development Committee (NPDC), the Department of Public Works and Highways (DPWH) and the city government of Manila. 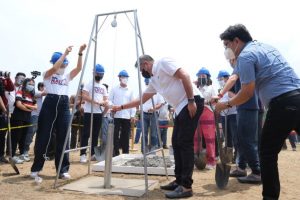 During the field hospital’s groundbreaking ceremony on  Tuesday, April 20, NTF Chief Implementer and Vaccine Czar Secretary Carlito Galvez Jr lauded the city government of Manila for spearheading the project that will benefit both residents and non-residents.

“The initiative of Manila bodes well to the four key areas of our ongoing preparation especially in building pandemic resilience and capacities,” Galvez said. 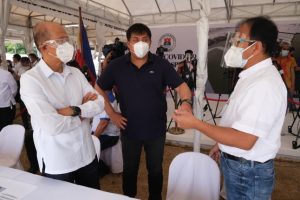 As the national government accelerates the implementation of the national vaccine program, it is also scaling up its Prevent-Detect-Isolate-Treat-Recover (PDITR) Strategy in light of the current surge in COVID-19 cases.

In particular, the Chief Implementer noted that the Mega Field Hospital will complement the national government’s efforts to increase the bed capacity of hospitals for moderate and severe cases and prepare the country for the “long haul.”

Meanwhile, NPDC Executive Director Cecille Lorenzana-Romero said the facility is “an inspiring example of local and national governments coming together with swiftness, clarity of purpose, and determination in order to respond to the urgent need of the people.”

“We have some way of how to heed the call of the national government para ma-unplug ‘yung ating hospital capacity at mabawasan ‘yung mga insidenteng may namamatayan,” said Manila Mayor Isko Moreno. 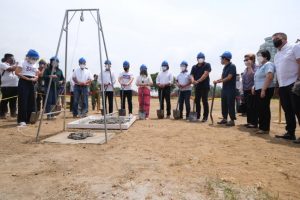 DOT Secretary Bernadette Romulo-Puyat shared that apart from the field hospital, a drive-thru vaccination facility will also be opened at the Quirino Grandstand and will be accessible to all Filipinos.

“The DOT is gratified and honored to be able to use its parks and public spaces in support of the national government pandemic response,” said Puyat.

“With strategic partnership between the private and public sectors, we are able to ramp up capacity from testing to treatment to vaccination in the race against the virus,” she added.

The Manila COVID 19 Field Hospital will be built in a 4,402-square lot, which will also include living quarters for 200 medical frontliners.

According to Moreno, the local government has a working budget of Php 154 million for its construction. The city is likewise keen on expanding the facility’s bed capacity should the need arise.

He said around 200 personnel, of which 150 are medical frontliners, are expected to be employed by the city with the assistance of the Department of Health (DOH). 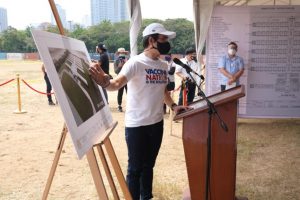 Moreno said the local government will also build an “ICU-like” facility in the city with a 60-bed capacity to address the medical needs of severe and critical cases.

The mayor said the field hospital is in addition to the existing 910-bed facility for asymptomatic cases and 523 COVID-19 dedicated beds provided for six hospitals in the city.

Moreno gave the assurance that the city’s facilities for COVID-19 patients will also accommodate non-Manila residents, saying, “We will continue to create and we will approach it inclusively.” ###