DAVAO CITY (February 16, 2021) — COVID-19 Task Force officials were highly impressed with the preparations being undertaken by the Davao City government for the arrival of the vaccines, as the city reported a downtrend in active cases starting this month.

This developed after the city government conducted its fourth simulation exercise at the Mabini Elementary School here on Tuesday which covered all phases of the actual vaccination process. 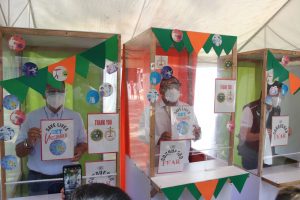 A well laid out plan 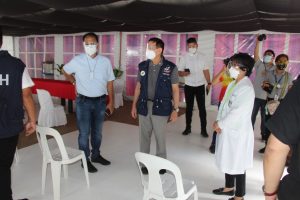 “Malinaw na malinaw na ito (vaccine plan) ay nakahanay sa linya or aligned to our national deployment vaccination plan. And we have noticed this morning as we ran through the various steps, ‘yung lahat ng element of our plan are very clearly laid out,” he added.

The health secretary, together with Sec. Carlito G. Galvez Jr, National Task Force Against COVID-19 Chief Implementer and Vaccine Czar and Cabinet Sec. Karlo Nograles, IATF spokesperson, were also given a walk-through of the vaccination process at the SPMC earlier in the day. 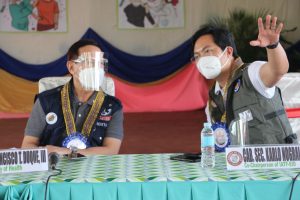 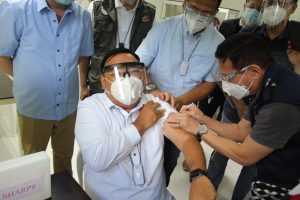 “I take this opportunity to congratulate the city of Davao and the local government unit headed by Ma’am Inday for reversing the trend in your COVID-19 cases in Davao City. We would appreciate it if that trend continues,” Duque said.

“I think that you just need to sustain the gains that you have accomplished and you build on those gains so that you will have more consistency in controlling the cases of COVID-19 here to a level that would not overwhelm your health system’s capacity,” he added.

Nograles, whose mother was confined for three weeks at the SPMC due to moderate novel coronavirus infection, likewise lauded the city government for its very effective COVID-19 response efforts.

“We are very lucky to have Mayor Sara Duterte because I know her to be a leader who looks at the finer details. Nakita naman ninyo, lahat ng mga detalye plantsado. Ang kulang na lang po ang vaccine,” he pointed out. 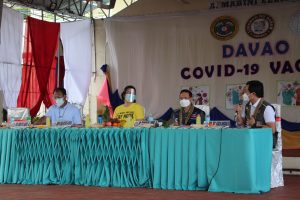 Nograles cited Davao’s use of a QR Code that has allowed the city to scale up its contact tracing capacity, and is set to be integrated into the online registration system for residents who will be vaccinated.

According to Domingo, President Rodrigo Duterte wants to have a portfolio of at least four to five vaccines, as there is no single manufacturer that would be able to provide volumes that would cover the 100 million Filipinos due for inoculation.

Domingo said that the World Health Organization (WHO) had already approved on Monday Astrazeneca’s vaccine for emergency use. This is a welcome development, he said, as the FDA has issued EUAs to both Pfizer and AstraZeneca. 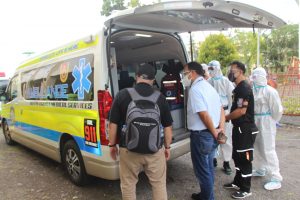 He said the FDA is currently evaluating the applications for EUA of China’s Sinovac and Russia’s Gamaleya, as they expect US-based Moderna to also file its application within the week.

For his part, Densing noted that his agency had issued a memorandum circular as early as January urging LGUs across the country to start carrying out their local vaccine pre-implementation plans.

In the said memorandum circular, he said that greater emphasis has been given towards realizing a particular directive that is now the special focus of the Vaccination Cluster of the IATF. Densing said this directive is for those in the local government “to help us create that feeling of confidence from our fellow Filipinos that the vaccine is important to us — that it is safe, it is effective and it is one of the solutions for us to overcome this crisis of the global pandemic.”

“We ask for your help in telling the people of Davao, Mindanao to be vaccinated. We have been waiting for this vaccine for a year. Now that it is arriving, let’s have ourselves vaccinated,” he said.

Meanwhile, Galvez said that he was very pleased to see the measures being put in place by the Davao City government as it gets ready for the rollout of the national immunization program this month.

The vaccine czar assured Mayor Sara that Davao City will be among the priority areas based on the national government’s geographical strategy, as it remains one of the areas in the country with high levels of COVID-19 infections. 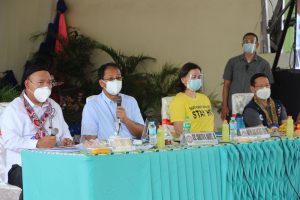 Light at the end of the tunnel

In her message, Mayor Sara noted the importance of the visit to the city of the Coordinated Operations to Defeat Pandemic (CODE) Team headed by the COVID-19 Task Force officials, as it “is certainly one that is certainly a cause for hope.”

“And now, we are finally awaiting the arrival of the vaccines — vaccines that will hopefully signal the beginning of the end of the scourge that is COVID-19 and lead us on the road of social economic recovery,” the mayor said. 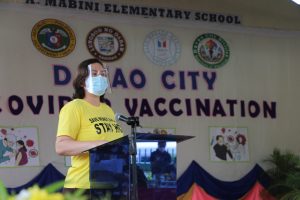 “We look forward to the rollout of the vaccines, the inoculation of Dabawenyos, and the eventual achievement of herd immunity for while we do not know when this pandemic will end, we are at least certain that soon, we may finally glimpse the light at the end of the tunnel,” she said.