SAN FERNANDO, Pampanga, November 8, 2019 – Major strides have been achieved in the Duterte Administration’s anti-insurgency efforts in Central Luzon following the mass surrender of New People’s Army (NPA) members due to the effective implementation of the Whole of Nation Approach under Executive Order 70 (EO 70).This developed as all seven provinces in Central Luzon have created their respective Provincial Task Force on Ending Local Communist Armed Conflict (PTF-ELCAC), as well as 40 municipal task forces and two city task forces.

The NTF-ELCAC was created specifically to synchronize the efforts of the national government and the private sector in order to put an end to the decades-long communist rebellion in the country.

Currently, 216 rebels have surrendered to authorities in Central Luzon since January of this year. Last November 7, 53 NPA members based in Aurora province and another 24 rebels from Nueva Ecija turned themselves in to the military’s 84th Infantry Battalion, and 91st Infantry Battalion, respectively.

“We have a lot of successes. All provinces in Region 3 have already activated their Provincial Task Force on Ending Local Communist Armed Conflict. Likewise, communist terrorist group was also declared by all the provinces in the region as persona non-grata through resolution,” Major General Lenard T. Agustin, commander of the 7th Infantry Division (ID) of the Philippine Army said during the meeting of the Peace, Law Enforcement and Development Support (PLEDS) Cluster of the Regional Task Force in Ending Local Communist Armed Conflict in Central Luzon on Friday. “There will be no letup in our efforts.  There are a lot of things that need to be done. We should maintain our cooperation, coordination, and collaboration. Your soldiers are here. We are firm and resolve in providing peace and security to our communities,” he said.

The 7th ID also reported that the areas where the rebel group operate have been significantly reduced and isolated in the mountainous part of Central Luzon.

Lt. General Ramiro Manuel Rey, commander of the Northern Luzon Command, said the military will continue to collaborate with all sectors in the community to address the peace and security in the area.

“This is the kind of convergence we are looking at. This is a model against insurgency. This is not a fight between arms to arms. We have been doing this for 50 years. We found out it’s not a military solution alone, but a convergence of all government agencies,” Rey said.

The general, who was among those who led the liberation of Marawi, noted that the implementation of the Whole-Of-Nation Approach has provided a major boost to security forces based in conflict-affected communities.

“We have seen a high success rate in our efforts,” Rey said.

According to Central Luzon Provincial Police Director Brigadier General Rhodel Sermonia,  his unit is now actively engaging academic institutions in the area as a strategy to prevent the insurgent group from recruiting students.

Sermonia said provincial police chiefs in the region have also linked up with labor groups and other vulnerable sectors to counter the influence of the communist rebels.

The gains achieved by the security in Region 3 are a testament of the Whole-Of-Nation Approach’s effectiveness in addressing communist insurgency, according to Presidential Peace Adviser Carlito G. Galvez, who is also the Officer for Regional Development and Security for Central Luzon.

“No group can win against the government. And for the people, it [shows] there is an active collaboration of [the] quadrant, which is composed of the Armed Forces of the Philippines (AFP), Philippine National Police (PNP), local government units, and the government frontline agencies,” Galvez said.

The peace adviser stressed it is important to understand the relation between ideology and social conditions. This knowledge, he said, will be crucial in addressing the roots of the long-standing communist rebellion.

At the heart of EO 70, Galvez said, is good governance which emanates from the directive of no less than President Duterte.

“Good governance can only be achieved through the Whole of Nation Approach. Together we will make it happen,” he said.

Galvez emphasized that he puts a premium on the PLEDS cluster as the body is responsible for addressing the communist threat.

“I am pleased that the RTF-ELCAC 3 is prepared to answer the challenges posed by the communist group and that the PLEDS cluster implementation plans are designed for those specific challenges,” he said. 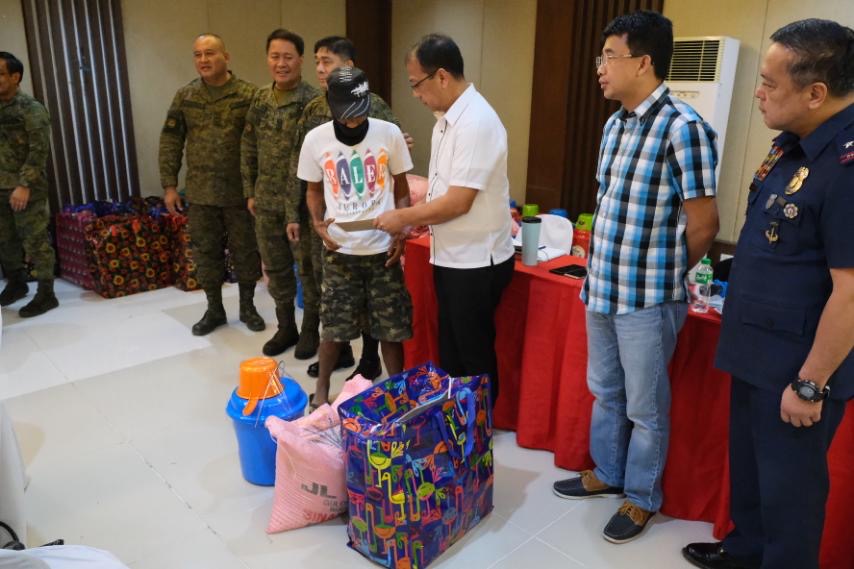 In support of the RTF-ELCAC objectives, PLEDS Cluster R3 conducts inter-agency operations to neutralize the communist group and their support structures.

During the PLEDS meeting, at least 28 rebel surrenderees were given immediate cash assistance, food packs, and sanitation implements worth of P200, 000.

It has a total land area of about 2.13 million hectares, making it the country’s food basket and a leading center for settlement and agri-industrial development.

The region has a population of 11,218,177 based on the 2015 Census of Population. It is the third-largest in the country, accounting for 11.1 percent of the national population.

Last year, its Gross Regional Domestic Product of the region was valued at PhP 904 billion, thereby making it the third-largest contributor to the national economy with a share of 9.8%.