SEDA HOTEL, DAVAO CITY (October 28, 2019) — Having a sound fiscal policy will be the key in reducing poverty incidence in the Bangsamoro Autonomous Region in Mindanao (BARMM) and consequently, unleash the region’s full economic potential, according to Presidential Peace Adviser Carlito G. Galvez, Jr.

“Fiscal autonomy that drives economic sufficiency and inclusive development is a vital pillar for harnessing progress and enhancing genuine autonomy in the BARMM,” Galvez told Bangsamoro Transition Authority (BTA) members during a learning session on the basic principles of taxation held here.

The three-day activity is a partnership between the University of the Philippines Law Center, Office of the Presidential Adviser on the Peace Process, and BTA. The learning session aims to instruct members of Parliament on fundamental legal and taxation principles and will serve as a venue to gather their insights as they prepare to draft BARMM’s Internal Revenue Code.

Galvez pointed out that it is crucial for the BARMM to boost its local revenue collections in light of the region’s high poverty incidence. Data from the Nation Statistics Authority show that the individual poverty incidence in the BARMM for the first quarter of 2018 stood at 63 percent, higher than the national poverty incidence of 61.3 percent during the same period in 2015.

On the other hand, he noted that BARMM’s locally-generated revenues only comprise 1 percent of the region’s total budget. This puts the region at a disadvantage since it is unable to fund much-needed programs that could uplift the living conditions of residents, and spur development in remote, underserved communities. 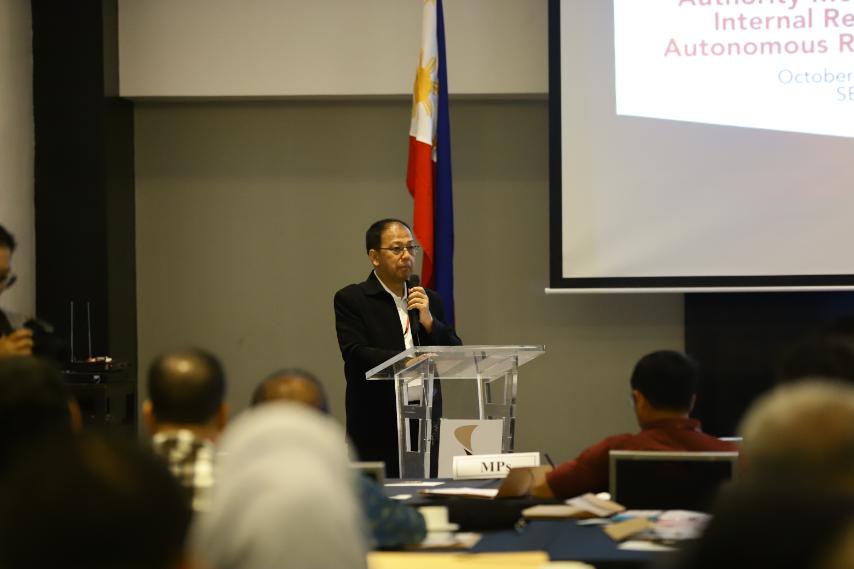 “Enhancing fiscal autonomy in the BARMM also means we have to be aware of the challenges posed by high poverty incidence, proliferation of shadow economy, inefficiency in tax collection, lack of investment, and underdeveloped human resources despite the immense potential in the BARMM,” he said.

Galvez pointed out that the additional funds to be collected by the BARMM government “will improve access [to], and provide more and better infrastructure, health, education and social services to residents, especially for those located in remote, underserved communities,” as he called on the Parliament members to “earn, save, build, and invest for the future.”

“More importantly, more funds will help you translate your various development plans into reality, and consequently, uplift the well-being of your people and transform their communities into show windows of peace and development,” he said, while stressing the need for the BARMM Revenue Code to embody the best interest of the Bangsamoro people.

Galvez likewise underscored the need for the BARMM Parliament to incorporate the principles of inclusiveness and convergence in all its development programs, saying, “By doing this, we shall guarantee that our initiatives will be more sustainable and have a greater impact on the people we serve.”

The peace adviser also emphasized the importance of “moral governance” among members of Parliament as they carry out their critical task of legislation.

He explained the four hierarchies under this dogma. The first is moral awareness, which  is knowing what is right and what is wrong.

The second is moral courage, which is doing what is right among the “competing good,” looking for the “best options,” and standing up for what one believes is beneficial for the “common good”.

Third is moral effectiveness, which is to lead and commit others towards the right direction. And the fourth is moral virtue, which is internalizing and making these practices a part of ones everyday way of life.

“Let us all be reminded that a sound fiscal autonomy and effective tax collection that justly redistributes wealth is an essential component of moral governance by which members of the BTA have sworn to uphold,” Galvez said, adding, “This is our challenge – how to entrench just peace built on just economy.” 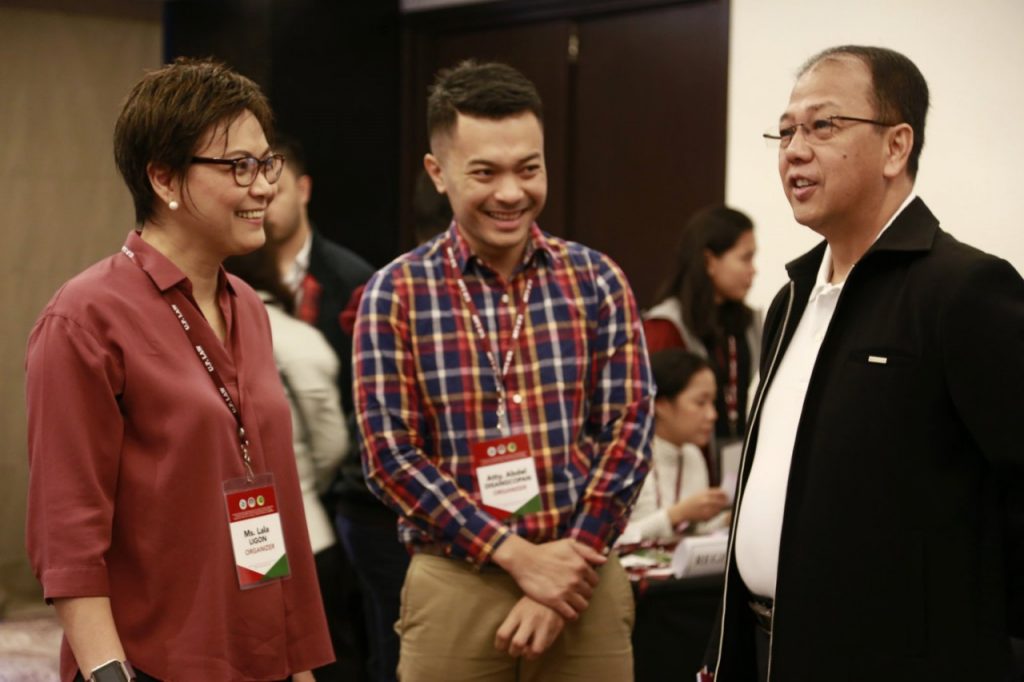 He also encouraged members of the BTA to adopt the fiscal management policies of highly-developed countries, which is anchored on the “earn, save, and invest” concept. This, he said, will help the Bangsamoro in carrying out sustainable fiscal reforms.

In the meantime, UP Dean College of Law Fides Cordero Tan highlighted the importance of the learning session for the members of the Parliament and the Bangsamoro people as a whole, saying, “I see a lot of love for our country. I see very strong sentiments of self-determination. And I saw the dawning of a new era.”

According to Tan, it is necessary for Parliament members to understand the basic principles of legislation, specifically the reasons why laws are crafted. She explained that laws “are norm[s] of conduct” and will help individuals determine what is right or wrong, and will be their basis when taking action.

“Law is a conduct that is obligatory upon all. It is an expression also of what the society feels ought to be the standards on how we relate with others. It is the source of rights and obligations,” she said, adding that for every right, there is a corresponding obligation people must fulfill under these laws.

“It is where we relate ourselves, it is where we see ourselves and it is a tool for moving forward towards the attainment of all that is very close to our hearts. And in this situation, of course, it is peace for us and for the next generations of children and of our children’s children,” Tan said, as she reaffirmed UP’s continued commitment to help capacitate the BARMM government.

The drafting of the Internal Revenue Code is among the key legislations the BTA is expected to prioritize in the coming months, along with the Administrative, Electoral, Local Government, and Education codes.

These codes will be crucial as the BARMM leadership focuses on the establishment of governance systems, structures and procedures that will enable it to efficiently run the political and economic affairs of the region

The creation of these codes is one of the key provisions of the Bangsamoro Organic Law, which is under the political track of the Comprehensive Agreement on the Bangsamoro signed between the government and the Moro Islamic Liberation Front. ### 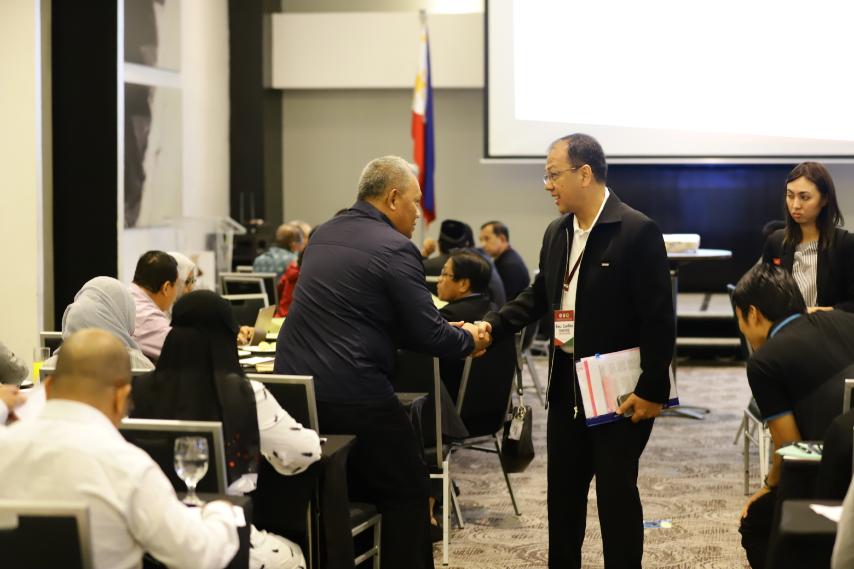