This is among the many powerful passages contained in the “Document on Human Fraternity for World Peace and Living Together” that was issued by Pope Francis and the Grand Imam of Al Azhar, Ahmad Al-Tayyeb early this year in Abu Dabhi, United Arab Emirates.

In a gathering of top Catholic and Muslim leaders held here, Catholic Bishops Conference of the Philippines (CBCP) and Davao Archbishop Rev. Fr. Romulo G. Valles said the adoption of the document will help foster solidarity, mutual understanding and cooperation among the country’s different faiths.

“I shall re-introduce the document to the CBCP [for its adoption] as a code of conduct,” Valles said during the Pakighinabi Conference on Healing and Reconciliation in the Bangsamoro organized by the Ateneo de Davao University and the Bishops-Ulama Conference.

The conference comes in the wake of the recent suicide bombings in the provinces of Sulu and Zamboanga which claimed the lives of scores of civilians, including Catholic and Muslim worshipers.

Presidential Adviser on Peace, Reconciliation and Unity Carlito G. Galvez Jr. threw his support behind the document, which he said “would help prevent the recurrence of armed conflict and the spread of violent extremism.”

Galvez said he will present it to the national government’s Security Cluster, Inter-Cabinet Cluster Meeting on Normalization (ICCMN) and the National Task Force to End Local Communist Armed Conflict (NTF-ELCAC). 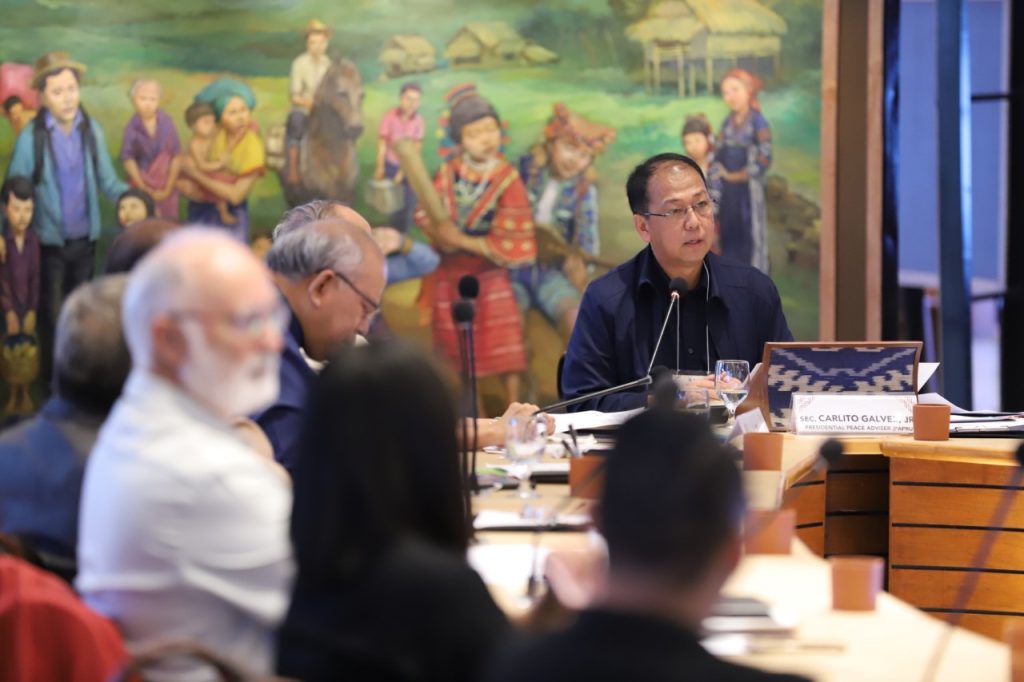 Presidential Adviser on Peace, Reconciliation and Unity Carlito G. Galvez Jr. speaks to the religious leaders of Mindanao during the Pakighinabi Conference on Healing and Reconciliation in the Bangsamoro.

“We will use this document as a basis for our agency’s interventions, particularly for the Transitional Justice and Reconciliation component of the Normalization Track,” Galvez said, adding he will also present it to the Armed Forces of the Philippines and Philippine National Police.

With the theme “Working and Walking Together for Healing and Reconciliation,” the inter-religious dialogue aimed to promote the culture of dialogue among the participants, while gathering suggestions on how to address pressing peace and security concerns in Mindanao.

According to Ateneo de Davao University President Fr. Joel Tabora, the document is “remarkable” in every sense because it is the product of a historic dialogue between the leaders of two of the world’s largest and most influential religions.

“Just the fact that these two religious leaders, one coming from Rome, the other coming from Cairo, came together in the Arabian Peninsula is already historical,” said Tabora in his presentation during the conference.

In underscoring the social and spiritual significance of the document, he noted the long-standing “history of conflict, violence and war” between the Muslim and Catholic faiths, which occurred despite the fact that “Both believe in one God of Compassion. Both are religions of peace.”

“Yet both bear responsibility for centuries of mutual ‘othering,’ for misunderstanding, contempt, and hatred, that have allowed their religions to be used as battle cries of rulers and politicians driven not by submission to God’s holy will but by mundane power,” Tabora said.

He also stressed the timeliness of the document’s release relative to the Bangsamoro peace process, citing the recent ratification of the Comprehensive Agreement on the Bangsamoro (CAB) and the establishment of the Bangsamoro Autonomous Region in Muslim Mindanao (BARMM).

“The ratification was a historic yes to peace in Mindanao and in the Philippines between Muslims and Christians who had been at enmity with each other for centuries,” Tabora said, a situation that was fueled by “the desire to whose religious values and traditions were to shape the culture of the land.”

“An arduous peace process determined that the historical injustice committed against the Bangsamoro could be righted in the creation of an autonomous homeland for Filipino Muslims who respected the diversity of religions and the mutual coexistence of Muslims, Christians and Lumad in the Bangsamoro Autonomous Region within the Philippines,” he said.

Tabora highlighted the major declarations made by Pope Francis and Al-Tayyeb in the document that included “the adoption of a culture of dialogue is the path, mutual cooperation is the code of conduct, and reciprocal understanding is the method and standard.”

The document, he explained, upholds the following key principles:

Dialogue, understanding and the widespread promotion of a culture of tolerance, acceptance of others and of living together peacefully would contribute significantly to reducing many economic, social, political and environmental problems that weigh so heavily on a large part of humanity.

Dialogue among believers means coming together in the vast space of spiritual, human and shared social values, and from here, transmitting the highest moral virtues that religions aim for.

The protection of the places of worship – synagogues, churches and mosques – is a duty guaranteed by religions, human values, laws and international agreements.

Terrorism is deplorable and threatens the security of people, be they in the East or the West, the North or the South, and disseminates panic, terror and pessimism, but this is not due to religion even when terrorists instrumentalize it.

“Places of worship are to be protected. This is stated in the context of the suicide [bombing] in the cathedral of Jolo and lethal grenade blasts in the mosque of Zamboanga,” he added.

In response to Tabora’s statement, Professor Moner Bajunaid, secretary-general of the National Ulama Conference of the Philippines (NUCP), noted that “the religious diversity in the Philippines should be a basis for dialogue.”

“This work of attaining peace through dialogue should be a continuous endeavor [among us]…there is a need to make this [process] more dynamic,” Bajunaid said.
The Muslim scholar suggested the use of the word “pro-existence” instead of “co-existence” because this would reflect the sincerity and compassion shown by the different religions towards each other.
“We should bear in mind that we do not only have two religions. We should be careful not to touch on each other’s sensibilities,” he said.

Bajunaid said he would be recommending the adoption of the document with the membership of the NUCP, and suggested the development of a “roadmap that can be used to achieve the things we are discussing.”

Meanwhile, Galvez emphasized the “need to carry out a paradigm shift that would help espouse the culture of dialogue, tolerance and peaceful co-existence” among the country’s tri-people.

He noted the Document on Human Fraternity can be used by the national government in resolving situations of “horizontal conflict” which have taken a heavy toll on the nation’s peace and security.

As the former chairman of the Government of the Philippines’ Coordinating Committee on the Cessation of Hostilities and subsequently, as chief-of-staff of the Armed Forces of the Philippines, he has studied numerous conflict situations in Mindanao.

“Horizontal conflict should be given more importance [by stakeholders]. In particular, Rido (clan wars) should be addressed,” Galvez said, adding the document could also be used as counterweight against terror groups who are using religion to promote their extremist views.

“We see the narrative being utilized by the terrorists. This is the reason why addressing violent extremism is on top of the national government’s peace and security agenda,” he said.

“Most of all, there should always be a sense of malasakit (empathy) when we carry out our work. As what President Duterte has said, we should do things with a heart,” Galvez said. ###