Salita’t Siyasat Peace Conversation: A meeting of the minds

DAVAO CITY—It was a “face-off.” A friendly face-off, that is.

For three hours, Presidential Peace Adviser Jesus G. Dureza took the “hot seat,” as he engaged senior high school students of the Ateneo de Davao University in a spirited discussion on a range of peace and security issues.

But the rules of the dialogue were clear from the start: The seasoned peace negotiator would be on equal footing with his young hosts. No one was above the other.

And the student participants, mostly senior high school leaders and staff of the school’s secondary and college publications, relished each and every moment of their encounter with the top cabinet official.

In fact, they took the opportunity to “grill” Sec. Dureza and ask him probing questions that did not seem to come from 17- and 18-year olds but from veteran political analysts.

On several occasions, the tables seemed to be turned between expert and novice, as the peace adviser listened intently to the students as they articulated their opinions on the peace process, violent extremism, the Marawi crisis and press freedom.

Clearly, the stars of the show were the students who demonstrated that the youth of today are not unhinged from present day realities, particularly on issues affecting the nation’s peace, security and development.

But like a father having a fireside chat with his children, the peace adviser patiently explained to the young crowd seated around him that the key to successful peace negotiations is finding a “convergence point” among stakeholders.

He said that such convergence can be achieved not by forcing one’s will upon the other and extracting concessions, but by “finding a common ground” between them.

“Peace-building is not [only] coming up with a ‘magical’ solution,” he pointed out, explaining that there is always a “different way of looking at things” that would ultimately lead to a solution that is favorable to all.

Sec. Dureza emphasized that a peace settlement cannot be achieved by “one stroke” of a pen, saying such agreements take time and which foundations are built “peace by piece.”

On the issue of violent extremism, he said the problem first reared its ugly head during the Marawi crisis.

According to him, the security threat had long been “incubating” in the country, but there were no serious efforts to address it until the siege happened.

He said those responsible for the crisis “had no ideology” whatsoever, and were only focused on sowing fear, anger and chaos among the residents.

To address this concern, Sec. Dureza said OPAPP has carried out a series of “social healing” activities that would help the victims recover from the physical and emotional trauma which resulted from the attack.

He noted that the siege had “destroyed the moral fiber of society” and there was a need to help the people “deal with their angst.”

“When something bad happens, you just can’t give people a house to make them happy,” Sec. Dureza said, adding, “You have to give them the opportunity to express their pain.”

To prevent a recurrence of the Marawi incident, he underscored the need “to address the historical injustices committed against the Bangsamoro” through the passage of the Bangsamoro Basic Law (BBL). 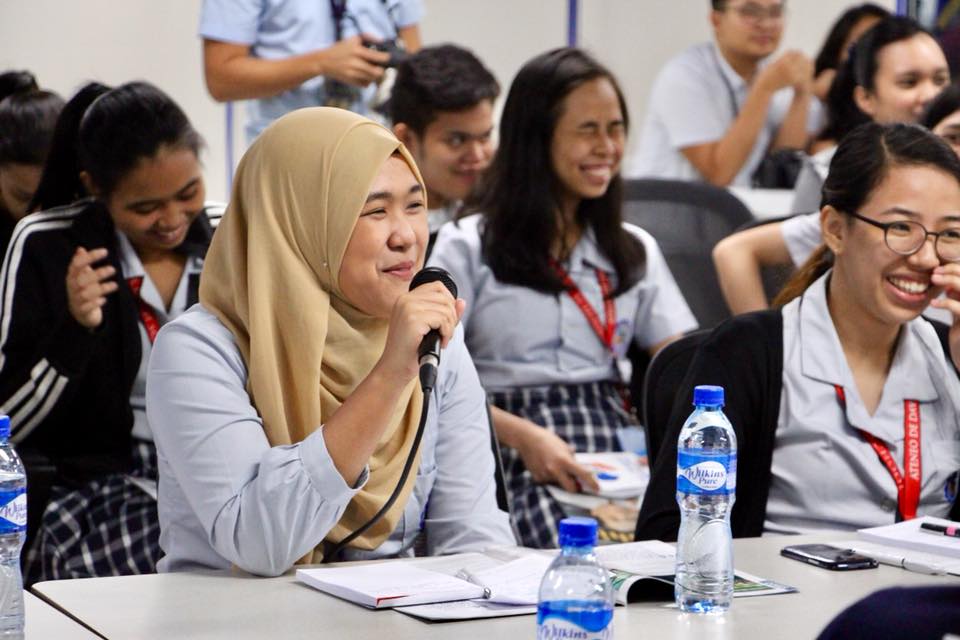 For their part, the student participants expressed their full support to the peace process and provided insights on how they think the youth can help the government in effectively addressing the peace and security situation in Mindanao.

For senior high school student Trisha Lupina, “Peace and order is something we (students) need to jointly work on.”

On the other hand, political science student Ian Silvano stressed the need to promote the principle of “social justice,” as he challenged high school students to play a more active role in peacebuilding.

Meanwhile, Jupiter Cabig, editor-in-chief of Atenews, observed that the issue of peace is discussed “abstractly,” as he called on his fellow students to help “contribute in re-framing this perspective.”

ADDU president Fr. Joel Tabora, who was seated among the audience, smiled with pride as he witnessed how the young Ateneans confidently expressed themselves and stood up to the challenge of exchanging views with Sec. Dureza.

In his remarks at the event’s closing, Fr. Tabora lauded the student organizers of the event, as he challenged them to be staunch advocates of social justice.

“Our mission and vision for students is to make a commitment for peace,” he said. ###