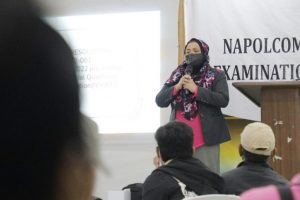 The orientation focused on the guidelines the applicants must comply with the Philippine National Police (PNP), as well as the requirements they need to submit for them to take the National Police Commission’s (NAPOLCOM) Special Qualifying Eligibility Examination (NSQEE) slated on May 29, 2022.

Director for Planning and Research Service, Evangeline Almirante, said that “5,060 successful examinees will be granted eligibility for temporary appointment as patrolman or patrolwoman of the PNP.”

A realization of the BOL

Article 11, Section 2, Paragraph 3 of the BOL stipulates that:

“After three years of the transition period, we are happy that we are finally taking the first step into making this provision a reality,” Ebrahim said.

Meanwhile, 51-year-old Abdulmuiz T. Bansil, representative of the 106 Base Command in Sultan Kudarat, said that he is looking forward to going back to his community and explaining to his comrades and family members how they can qualify for the NSQEE.

The following are the general requirements for taking the NSQEE: