PASIG CITY — The Duterte Administration’s Whole-of-Nation Approach has been highly effective in addressing the communist insurgency in Central Luzon, as it is helping to bring increased peace, security, development and stability in communities once affected by armed conflict throughout the region.
This was the consensus made during the National Task Force – Regional Task Force – Ending Local Communist Armed Conflict (NTF-RTF-ELCAC) 3 Summing Up Meeting held via virtual teleconference on Thursday, February 24.

The NTF-RTF sessions, which began in January this year and will end in March 2022, are enabling regional task forces to update the NTF ELCAC leadership on their accomplishments since the implementation of Executive Order No. 70 signed by President Rodrigo Roa Duterte in 2018.

E.O. 70 mandated a Whole-of-National approach in putting an end to the decades-long communist insurgency, which led to the creation of the NTF-ELCAC and the 17 Joint Regional Task Forces (JRTFs).

The summing up sessions are also allowing the harmonization and re-alignment of all the initiatives of the 12 clusters both at the national and regional level, and at the same time, identifying gaps in their implementation.

“Overall, we can firmly assert that the Whole-of-Nation approach is significantly leading to positive effects in the security situation in all of our seven provinces and two highly-urbanized cities [in the region],” Regional Peace and Order 3 chairperson and Zambales Governor Hermogenes Ebdane Jr. said in his remarks.

Through this whole-of-society approach, Ebdane said the RTF 3 led by the security sector was able to dismantle in May 2021 the Kilusang Larangang Gerilya (KLG) – Sierra Madre which was one of the major guerilla fronts of the communist insurgency in the region.

“KLG Sierra Madre was successfully dismantled in the first quarter of the 2021 along with the clearing of barangays formerly under their influence. Peoples organizations were established and are now supporting the development efforts of the government,” the governor said.

“Truly these were accomplished in less than 4 years and even amidst the COVID-19 pandemic prove that all of us share a vision of attaining a peaceful, safe and thriving communities all across Central Luzon,” Ebdane said.

For his part, Regional Development Council 3 co-chairperson Dr. Reynato Arimbuyutan, highlighted the significant impact made by Executive Order No. 70 issued by President Rodrigo Roa Duterte in 2018.

“EO 70 harmonizes the delivery of basic services and social development packages in conflict-affected and vulnerable communities in pursuit of the country’s peace and development agenda,” Arimbuyutan said.

“The NTF-ELCAC had been effective and decisive in addressing the root causes of the insurgency that will bring an end to the armed conflict and attain an inclusive and sustainable peace,” he added.

Arimbuyutan emphasized that the Duterte Administration “has been relentless in pursuing a just and lasting peace in the country.”

Aside from dismantling the KLG Sierra Madre, RTF 3 also neutralized the KLG Caraballo and the Larangang Guerilla sa Patag 1 in 2019.

All of the 36 CTG-affected barangays in the region have been cleared of the insurgents in 2021.

All provinces, cities, municipalities and barangays in the provinces have declared the CTG as persona non-grata.

Further, local peace engagement (LPE) initiatives have been carried out in conflict-affected and conflict-vulnerable areas throughout the province, which included community consultations and problem-solving sessions.

The RTF 3 Technical Working Group, in partnership with the Office of the Presidential Adviser on Peace, Reconciliation and Unity, also organized the Duterte Legacy: Baranggayanihan Caravan showcasing the various programs of line agencies.

In its accomplishment report, the RTF 3 Sub-Cluster on Governance and Development shared that a series of livelihood interventions were carried out in far-flung communities in Central Luzon that are helping to uplift the lives of residents.

These initiatives included the distribution of food packs and relief goods, the conduct of peace-building activities, the implementation of agricultural and fishing projects, as well as the provision of business start-up assistance.

Moreover, the Technical Education and Skills Development Authority (TESDA), in partnership with the Provincial Government of Bulacan as well as other government agencies and private institutions, are implementing the Kabalikat sa Kabuhayan at Kaunlaran or K3 Project in San Mateo, Norzagaray, Bulacan.

Through the Kababayang Katutubo (4Ks) Program of the Department of Agriculture, indigenous people’s (IP) groups were given starting kits that will enable them to begin farming and livestock raising.

Financial assistance coming from RTF 3 member-agencies were also extended to 12,083 students in the province, while 900 IPs have benefitted from the National Commission on Indigenous People Commission’s Educational Assistance Program.

Meanwhile, the RTF 3’s Legal, Intelligence and Strategic Communications Sub-Cluster reported that it produced 3,211 news and 3,399 photo releases that were disseminated to over 45 national and local media practitioners.

The sub-cluster also facilitated a total of 98 virtual and face-to-face press conferences, as well as conducted 573 awareness drives particularly on the implementation of E.O. 70.

As a result of these extensive information and advocacy campaigns, 83,698 stakeholders from various sectors in the seven provinces of Central Luzon were reached.

The sub-cluster also spearheaded the conduct of 17 community consultations and problem-solving sessions with around 1,528 former CTG members and sympathizers in support to the LPE cluster.

At the same RTF 3 meeting, Presidential Adviser for Peace, Reconciliation and Unity Secretary Carlito G. Galvez, Jr. underscored the importance of the NTF-RTF ELCAC summing up sessions that are being conducted nationwide. 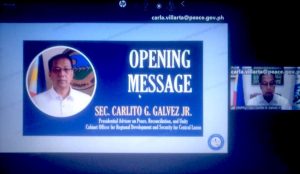 “These meetings will allow us to craft catch up plans in order to address the gaps we have identified, and reformulate the goals and targets we have set so that they will be more attainable,” Galvez said, who is the Cabinet Officer for Regional Development and Security (CORDS) for Region 3.

The peace adviser stressed among the RTF 3 member-agencies the need to learn from the lessons of the past and apply these to the initiatives the task force will be implementing this year and beyond.

“I know that our work in RTF 3 has not been a walk in the park. Since the health crisis struck in 2020, the task force has been facing various challenges both at the peace and security and health front,” he said.

“But time and again, the RTF 3 has shown that it is made of sterner stuff. You have not only faced these difficulties head on; you have managed to carry out our crucial mandate as the task force continues to strengthen as an organization,” Galvez added.

Moving forward, he advised the members of the task force to focus on five key areas that will enable the body to sustain the gains it has achieved over the past four years.

With regards to the dismantling of guerilla fronts, Galvez noted “We have been making major headway in this effort through the strong partnership between local government units, the security sector and members of the community. We need to sustain this.”

To encourage the surrender of members of mass organizations that are supporting the CTG, he said, “This is also one area which we should intensify in parallel with the dismantling of guerilla fronts. By doing this, we are taking away their mass base for support and recruitment.”

To protect the youth and marginalized sectors, Galvez pointed out, “These are the sectors who remain most vulnerable to recruitment by the Communist Terrorist Group. We need to prevent them from bringing more recruits into their fold through convergent efforts of concerned clusters in exposing the CTG deceptions and expounding on the truth.”

And to strengthen the capacity of LGUs, he stressed “Over the years, our LGUs have been our invaluable partners in putting an end to the cycle of violence in their communities. We need to continuously engage and empower them to take the lead role in our ELCAC efforts.”

“As CORDS 3, I am very proud of what we have accomplished in the regional task force. We have seen and demonstrated that the Whole-of-Government Approach in addressing the decades-long communist insurgency works,” Galvez concluded. ###