MAGUINDANAO PROVINCE – The National Task Force for the Disbandment of Private Armed Groups (NTF-DPAGs) has so far disbanded six private armed groups operating in this province from January to March this year.

This was according to Police Lieutenant General Jose Chiquito Malayo, commander of the Task Force DPAGs in Western Mindanao, who presented the task force’s accomplishments during the Third Oversight Committee Meeting of the NTF-DPAGs on Friday, March 26.

“This is the result of intensified efforts and activities in bringing down the number of active PAGs and a clear evidence to the lawless groups that the government is determined to uphold peace and order in the Bangsamoro,” he said.

In his presentation, Police Brigadier General Honorio Agnila, commander of the Task Force DPAGs in Eastern Mindanao, bared that private armed groups which have been “downgraded” are no longer engaged in criminal activities.

“Continuous monitoring and preventive actions were [conducted] by the task force against dismantled, delisted or downgraded PAGs to avoid their resurgence that can be used by politicians in the upcoming national elections,” Agnila said.

This includes the disbandment of private armed groups, the implementation of a program for small arms and light weapons management, the redeployment of Armed Forces of the Philippines (AFP), policing, and the clearing of unexploded ordnance (UXO) and landmines.

“This meeting is a reminder of the path that we all took to reach this stage in the [Bangsamoro] peace process. Peace requires hard work and commitment. Let us be reminded that failure in this endeavor (NTF-DPAGs) is not an option – as the alternative to peace is costly and burdensome,” he said.

The NTF-DPAGs was created on 2 September 2015, through Memorandum Circular No. 83  “Creating the National Task Force for the Disbandment of the Private Armed Groups in the Areas of the Proposed Bangsamoro and the Adjacent Regions IX to XII.”

The NTF-DPAGs is chaired by the secretary of the Interior and Local Government, with members coming from various government agencies. The chair of the GPH Implementing Panel is also among the task force’s members.

During the meeting, DILG Undersecretary and officer-in-charge Bernardo C. Florece Jr., emphasized that the work being done by the task force is both timely and crucial, particularly  in keeping the 2022 elections safe, credible and democratic. 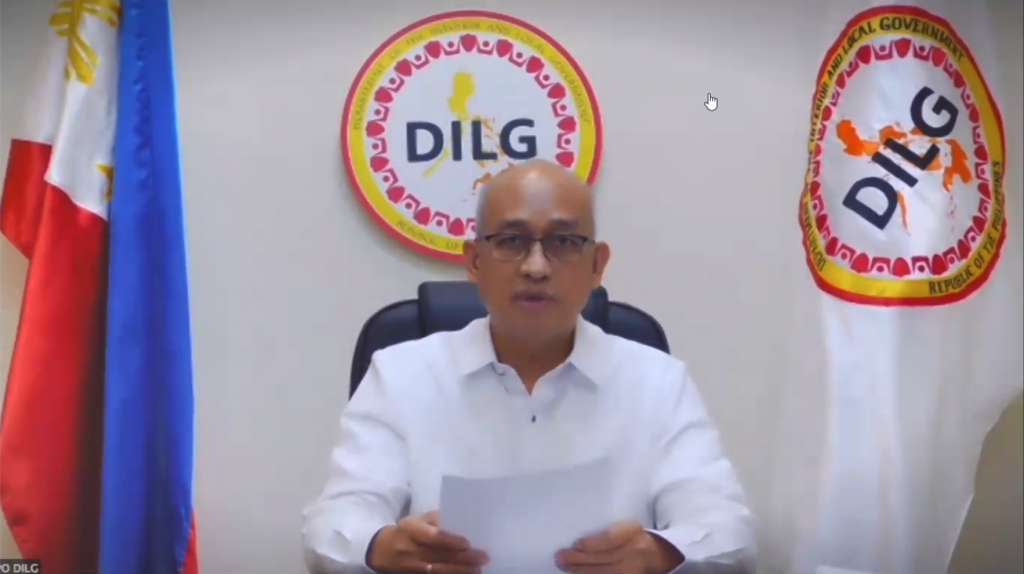 “Now is the time to take decisive actions to disband PAGs and convince their members to abandon their gun wielding activities. We must build on the gains of our initiatives to wield out and ultimately end PAGs for they don’t deserve room for a just society,” Florece said.

“With the group’s strategic plan in place, we should be able to address the root causes of PAGs in key priority areas and facilitate an inclusive and active participation of all sectors of society in the pursuit of peace,” he added.

Florece also underscored the commitment of DILG in dismantling PAGs, saying “…rest assured that we in the Department of Interior and Local Government, are ready to render any necessary assistance, the DILG will remain focused on disbanding PAGs in the country.”

For his part, DILG Assistant Secretary and alternate chairperson of the NTF DPAGs Alexander L. Macario pointed out that the work being carried out by the task force covers the entire country.

“Part of DILG’s commitment for a peaceful community, the DPAGs will not only be done in Regions 9, 10, 11, 12 and BARMM areas but to other regions as well,” Macario said.

Meanwhile, Presidential Peace Adviser Carlito G. Galvez Jr reiterated his guidance to members of the task force as they conduct operations against PAGs.

Galvez reminded them to implement community-based activities, noting, “A comprehensive peace process should be community-based and aims to establish a genuinely pluralistic society, where all individuals and groups are free to engage in our different activities and programs.”

He also emphasized the need to decrease the number of PAGs before the 2022 elections.

“It is critical to eliminate as many active PAGs as we can to protect and uphold democracy and weaken the culture of violence in the region,” Galvez said.

The peace adviser also reminded the task force to take into account the situation in the field when implementing its programs on PAGs.

“There would be instances that things will not proceed as planned. so it’s imperative that we have a plan A, B, C, and so on. This will allow us to effectively collectively make decisions and act based on emerging realities on the ground,” he said.

In order to generate stronger public support for the initiatives being done by the task force, Galvez highlighted the importance of strengthening the group’s capacity for strategic communication.

“We need to make people understand what we do, and why we are doing these things. We have to show everyone that our main goal is to create an environment free from fear, anger and violence, and where peace, mutual understanding and unity reign,” he said.

As the chief implementer of the National Task Force Against COVID-19 and country’s Vaccine Czar, Galvez also reminded everyone to observe the policies of the Inter-agency Task Force on Emerging Infectious Diseases.

“There is a need for us to strictly adhere to minimum health guidelines and protocols set by the national government when we are making our forum and meetings. even if the vaccines have started to arrive, we cannot be complacent and let our guard down.”

Galvez called on members of the task force to continue the outstanding work they have been doing to ensure peace and security in the region.

“Our gathering today is a testament of our desire to accomplish our mission. Let us continue to work hand in hand to realize our collective vision of achieving long-lasting peace and sustainable development in the Bangsamoro,” he said. END