MAKATI CITY (December 4, 2019) – The Government of the Philippines and the Moro National Liberation Front – Jikiri Group (GPH-MNLF) coordinating committee convened here today in a bid to complete the remaining commitments under the 1996 GPH-MNLF Final Peace Agreement.

Tabaquero, who heads the government side bared that President Rodrigo Roa Duterte had approved the formal creation of the coordinating committee last November 22, 2019.

“[This] directive is a testament of our dear President to provide all necessary avenues for engagement with our peace agreement partners,” Tabaquero said.

Tabaquero also emphasized that the newly-established body hopes to achieve the objectives of the MNLF peace process through “unity, cooperation, openness and finding solutions creatively.”

For his part, MNLF coordinating committee chair Ali Montaha Babao reaffirmed the MNLF – Jikiri group’s  commitment to uplift the lives of their comrades and improve socio-economic conditions in their communities.

“Along the ranks of the MNLF, under the guidance of Chairman Jikiri and through the Central Committee and the Bangsamoro People National Congress, we will continue to cooperate in our quest to achieve durable, honorable lasting peace for our people,” he said. 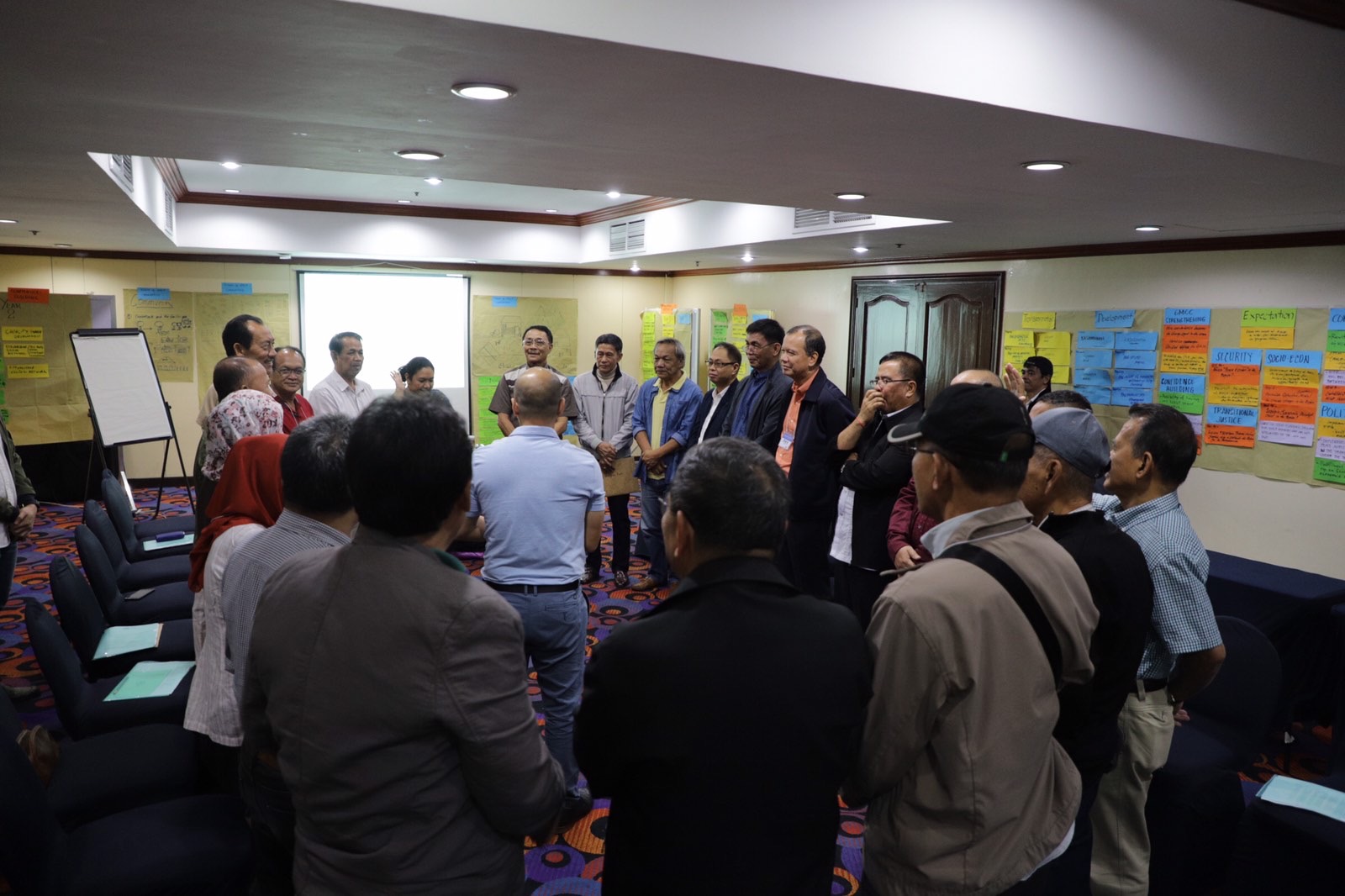 The two-day planning workshop provided a venue for the coordinating committee to identify the goals it wants to achieve within the next three years, as well as initiatives it plans to carry out in 2020.

During the workshop, members of the MNLF-Jikiri group were asked to outline their plans for their comrades and how they hope to achieve them. They did so through the use of an unconventional method: illustration.

The participants drew a house, school and road, surrounded by agricultural lands filled with crops and agricultural equipment. They explained these structures represent the transformation of their camps into peaceful and progressive communities.

The group also sketched people inside a classroom, as well as a community with mosques, schools, gymnasiums, multipurpose buildings and healthcare centres which symbolized their members’ holistic transformation into productive civilians.

The MNLF members emphasized the implementation of education and skills training programs will be crucial in obtaining the support of the youth sector, and prevent them from joining violent extremist groups and other lawless elements.

“I was so impressed with your outputs and it gave us the ingredients on how we can accomplish what was promised to our MNLF brothers and sisters,” Galvez told the participants during the workshop.

He also discussed the socio-economic packages the national government intends to provide to the MNLF members and their families.

“We’ll work it out so [you] can also be included in the educational, scholarship and training programs under our partnerships with the Department of Labor and Employment (DOLE), and Technical Education and Skills Development Authority (TESDA),” he said. 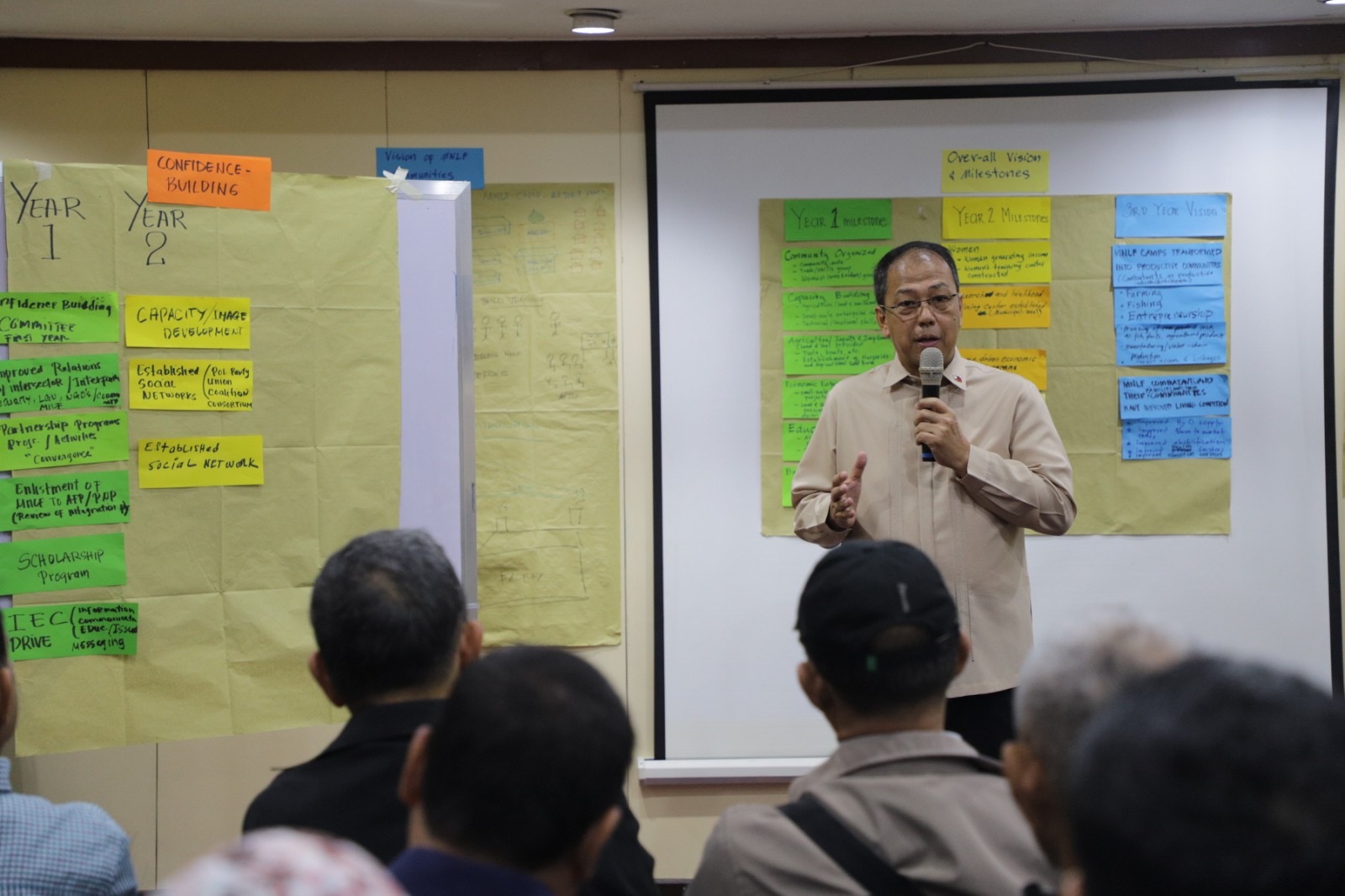 In October, OPAPP and DOLE forged an agreement in which the latter will implement integrated livelihood and emergency employment programs as part of the Normalization Program for the decommissioned combatants.

The peace adviser also  lauded the MNLF Jikiri and Misuari groups for helping the government rescue the Hyron couple who were kidnapped by the Abu Sayyaf Group.

““I would like to congratulate the MNLF community for the safe rescue of the Hyron family,” he said, adding, “This joint cooperation will help the military in curbing terrorism and kidnappings in Sulu and Central Mindanao.”

Galvez also mentioned his ongoing talks with WESTMINCOM and division commanders of the AFP in Central and Western Mindanao in order to possibly facilitate the inclusion of atleast 5% quota in the recruitment of Muslims IPs into the military.

Galvez likewise shared the highlights of his recent talks with President Duterte wherein they discussed how to bring greater convergence and inclusivity in the peace process with the Moro fronts.

He also encouraged members of the coordinating  committee “to get the ball rolling and schedule your succeeding meetings with the communities” as he reaffirmed the government’s commitment to support the initiatives of the GPH-MNLF Coordinating Committee.

“OPAPP is committed to provide the necessary resources and expertise to ensure that things will be on track. Makakaasa po kayo na hindi namin kayo pababayaan,” Galvez  said.

Under the Duterte Administration, the government continues to create avenues for peace engagements between the two MNLF groups – the one led by Yusoph Jikiri, and the other headed by MNLF founding chairman Nur Misuari.

This initiative is in line with the efforts of the Duterte Administration to complete the remaining commitments under the 1996 Final Peace Agreement, which are  focused on improving of socio-economic and security conditions of MNLF members and their communities.

In October 2018, the MNLF Jikiri Group came out with a resolution reiterating their full support for the passage and ratification of the Bangsamoro Organic Law (BOL). The group then participated in an intensive IEC campaign to help rally the support of the Moro people behind the landmark law.

Ten of 76 Bangsamoro Transition Authority (BTA) members are representatives of the MNLF Jikiri Group who took their oath of office before President Duterte last February 22, 2019.

On August 16, 2019, the first meeting of the GPH and MNLF – Jikiri coordinating committee was held. During the gathering, the subcommittees on security, socio-economic, transitional justice, and confidence building for the Normalization Program were established.

The coordinating committee then met with the AFP’s Western Mindanao Command on September 17, 2019 to discuss increased cooperation between the MNLF – Jikiri group and security forces to ensure peace and security in the province of Sulu.

On November 22, 2019, President Duterte approved the constitution of the GPH-MNLF Jikiri group  coordinating committee through a resolution released by the office of Executive Secretary Salvador Medialdea.

Meanwhile, President Duterte and the MNLF group led by Nur Misuari also agreed to create a GPH-MNLF peace coordinating committee during a meeting on August 23, 2019.

This committee aims to serve as an avenue for coordination and cooperation between the national government and MNLF – Misuari group, specifically in maintaining peace and order in Sulu and combating the Abu Sayyaf terror group.

On September 21, 2019, the first GPH-MNLF peace coordinating committee was held in Davao City. It was led by Presidential Peace Adviser Carlito G. Galvez Jr. and MNLF Founding Chair Nur Misuari. Among the matters discussed during the meeting was the composition of the committee.

The GPH and MNLF – Misuari group coordinating committee met again on October 1, 2019 and agreed to create a joint secretariat composed of four members from each side, establish subcommittees to work on specific deliverables, and schedule the next meeting to be graced by President Duterte.