ASUNCION, DAVAO DEL NORTE – For more than a year, 26-year-old “Crisna” (not her real name) spent many sleepless nights roaming the highlands of Agusan on foot, making sure to stay away from the watchful eye of the military regiment operating in the area.

She became a member of the Communist Party of the Philippines – New People’s Army (CPP-NPA) in 2017, working both as a medic and masseur. Her husband passed away the same year.

Crisna was recruited by her cousin “Marben” (not his real name), a 15-year-old NPA cadre from Davao del Norte who assured her that she would be given a monthly allowance of P3,200. She readily accepted the offer, hoping to send money to her three children back home.

But after five months, her family stopped receiving the money she was sending them through another NPA member. This became a major cause of concern because her children depended solely on her, leading her to question her decision to join the rebel group.

“Human sa lima ka bulan, nangutana ko didto sa balay kung naa pa ginadawat. Ingon sila, wala na,” shared Crisna who eventually decided to leave the communist organization after she found out about its real motives. (On my fifth month [with the organization], I asked my family if they were receiving the money I sent. They said not anymore.”)

Marben, whose job was to cook for the rebels, realized that joining the rebels was a huge mistake when he learned that his family was going hungry after he left them.

“Ako ang naga andam og pagkaon sa ila pero ang akong pamilya walay ginakaon maski gamay,” he recalled. (I was the one preparing their food but my own family didn’t have anything to eat.)

He decided to turn his back from the rebel movement when he discovered that it was not the “real government” as it professed to be. “Nihawa ko sa NPA kay dili sila ang tinood na gobyerno.” (I left the NPA because it is not the real government.)

Crisna and Marben are among the 38 CPP-NPA members from Eastern Mindanao who turned themselves in to the 60th Infantry Battalion early this year.

They all received “immediate assistance packages” from the Office of the Presidential Adviser on the Peace Process (OPAPP) in simple ceremonies held last August 6 at the 60th IB camp in this municipality.

The activity was spearheaded by the 10th Infantry Division of the Armed Forces of the Philippines, Provincial Government of Davao del Norte, Municipal Government of Kapalong and the AFP’s Eastern Mindanao Command.

Bringing government closer to the people 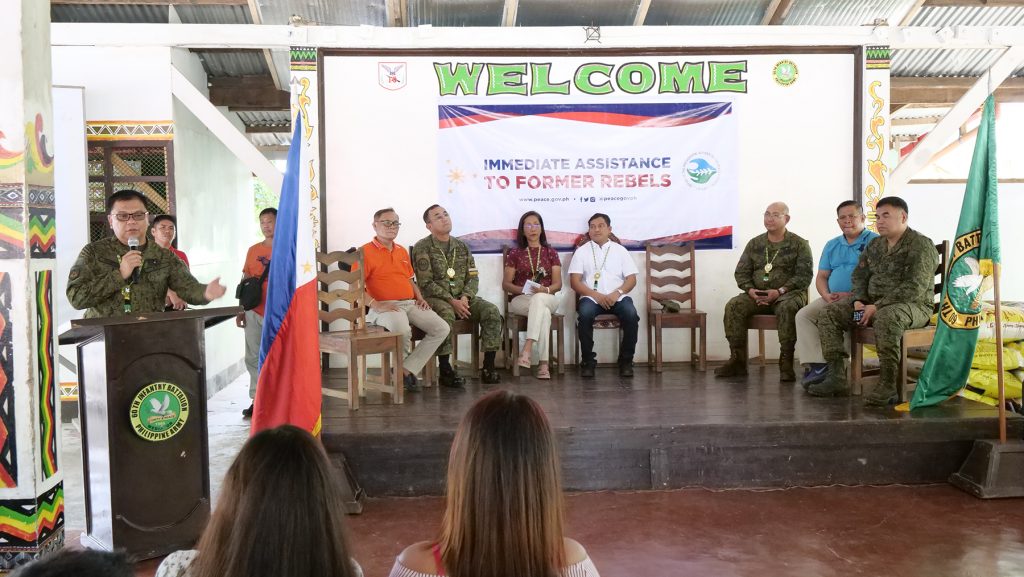 (We want you to feel the presence of the real government. All of the agencies of government are working together to put an end to the activities of the communists.)

Deputy Commander of the EastMinCom BGen Ernesto Torres, Jr. who represented Presidential Peace Adviser Carlito G. Galvez Jr. at the event, said the assistance packages given to the former rebels is a manifestation of the government’s sincerity and commitment to help the former rebels rebuild their lives. 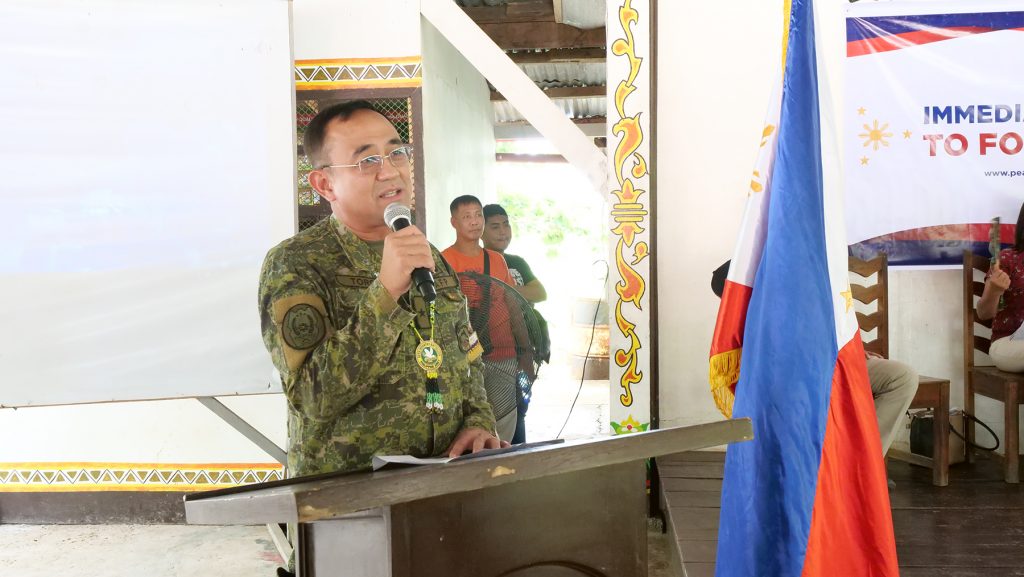 “Now that you are back in the hands of the government, as civilians, you will enjoy the services of government,” Torres said.

“Your decision does not only help you but importantly your family and your respective community,” he added. “Start living the normal life again.”

For her part, Asuncion Mayor Maria Theresa Timbol warned the former rebels “not to be deceived easily by the communist-terrorist groups as they give false promises.” 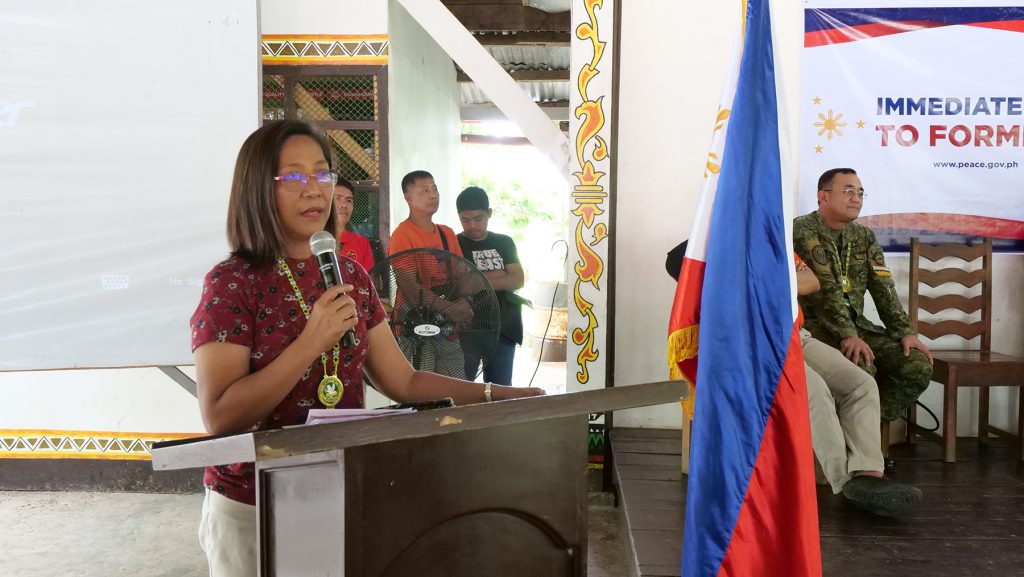 According to Timbol, the government “should help our cultural communities, the tribes and the lumads (indigenous peoples).”

“That’s why we still have to make more roads to open communities towards development and deliver basic services to people. Your decision to go back to the government will never be wasted,” she said.

“All our efforts will not be wasted. Live a normal life with your family and defend and protect your community,” Timbol added.

“We cannot blame you for joining the NPAs. You have experienced the life ‘inside.’ And it was difficult,” said Davao del Norte Governor Edwin Jubahib.

“You don’t have to be a rebel to be given services from the government. We are here to help you become more productive and that you and your family prosper — to live in a community where we respect each other and help protect the peace and order,” Jubahib said.

In particular, the approach will utilize localized peace engagements wherein LGUs and other stakeholders in the community will take the lead in finding solutions to resolve the decades-long communist insurgency in the country.

As an offshoot of the Whole-Of-Nation Approach, the Cabinet Officer for Regional Development and Security (CORDS) was created. It is a mechanism that aims to link regional and sub-regional levels of government to national agencies in order to harmonize peace, development and security efforts.

As the designated CORDS for Central Luzon, Galvez role oversees peace and development efforts being carried out in the region. Specifically, he convenes and presides over the Regional Task Force-ELCAC 3 composed of the Regional Peace and Order and Regional Development Councils.

“One of the key features of the EO 70 are what we call localized peace engagements,” Galvez explained during a recent CORDS meeting in Maguindanao.

“This means that local government units and members of the community will be the ones to provide recommendations on how to best address the rebellion in their communities,” he explained.

“If these community-driven peace dialogues move forward and bear positive results, members of the rebel group have the option to enter into local peace agreements with LGUs and avail of the Enhanced Comprehensive Local Integration Program (ECLIP),” Galvez said.