MANILA, April 27, 2018 – Presidential Peace Adviser Jesus G. Dureza showcased the inclusive approach of the government in peacebuilding during a briefing with the Filipino community at the Philippine Consulate in New York City yesterday.

Fresh from his speaking engagements during the high-level meeting on peace and sustaining peace at the United Nations (UN) General Assembly, Secretary Dureza met with the group to underscore the importance of incorporating the public in the peace process.

“You have to address the bigger table. The bigger table is the public. Because even if I sign agreements with the smaller table (rebel groups), ‘pag hindi tinanggap ng publiko wala ding mangyayari (nothing will happen if the public does not accept it),” he said.

Citing the failure of the previous Bangsamoro Basic Law (BBL) to be passed by Congress in 2016, Dureza said legislators vote for measures consistent with the sentiments of their constituents. 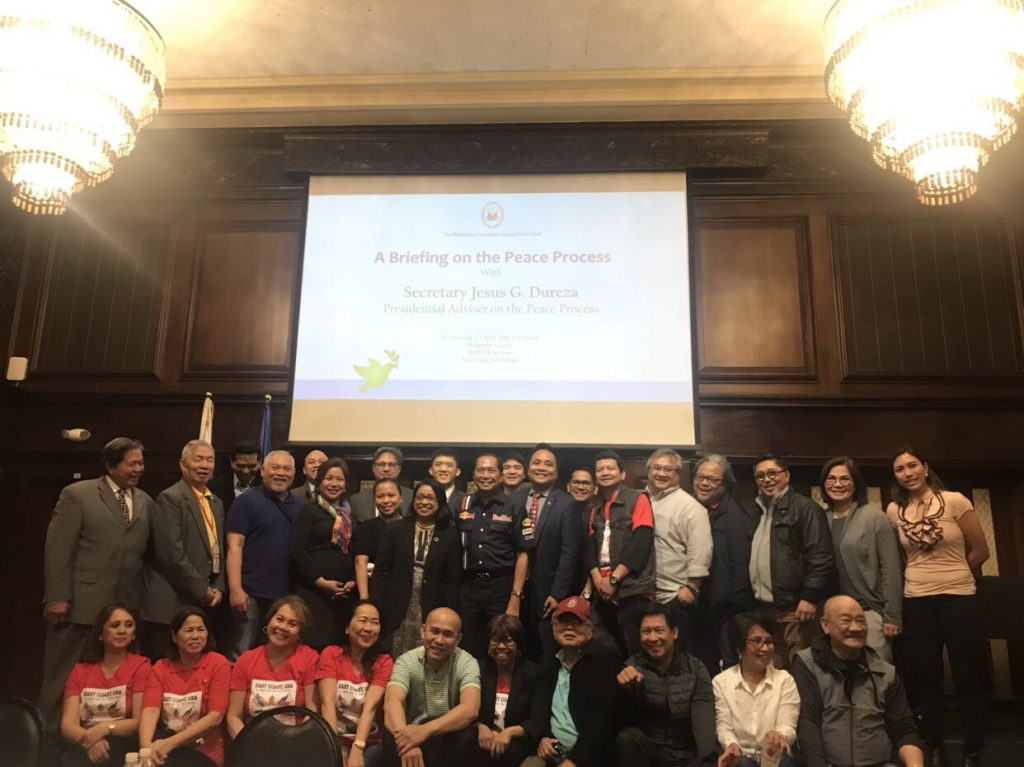 Aside from engaging the general public, the peace adviser also emphasized the need to continue the dialogue with rebel groups that already have peace agreements with the government.

“Mayroon pa tayong mga nagrebelde sa gobyerno na tumalima na ngayon (There are a number of rebels who have now come back to the folds of the law). We cannot just leave them alone,” he said.

The government is currently working on the completion of the peace process with the Rebolusyonaryong Partido ng Manggagawa ng Pilipinas/Revolutionary Proletarian Army/Alex Boncayao Brigade and the Cordillera People’s Liberation Army/Cordillera Bodong Administration.

Dureza said in all the efforts the government is undertaking, there is also the need to improve the lives of the people affected by conflict.

“Our work for peace is not only negotiations now. It is also a nexus with development. Kailangan nating ma-improve ang lives ng mga tao sa mga areas na yan. Buong bayan sana kung pwede (We need to improve the lives of the people in those areas. The whole country if possible),” he said.  ###