Samar highlights role of women and youth on peace

SAMAR – Fresh from its rendezvous in Luzon, the Office of the Presidential Adviser on the Peace Process’ (OPAPP) Peace Buzz continued its journey on bringing efforts on community peace-building in Visayas, Monday morning.

In his speech, Dureza reiterated OPAPP’s goal on creating a climate of peace in the community, and stressed to the people of Northern Samar the importance of a unified society and build relationships. 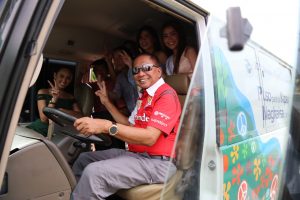 In Catbalogan City, peace conversations with women and youth were held simultaneously. Jamilnur Sarip, a Maranao student and a fruit of OPAPP’s youth peace table, shared on channeling his struggles on the Marawi siege as an opportunity to spread peace.

“Every time I hear bombs, I really feel hopeless on peace.  I’m just an ordinary youth who can serve the nation by spreading the importance of peace in our homeland. But if I stop, there will be no more Mr. Jamilnur helping the government and the leaders in spreading peace – that’s how important the participation of youth is in our country and in peace negotiations,” Sarip imparted to the Waray youth.

Through the theme “Puso Para sa Kapayapaan, Magkaisa Para sa Bayan”, OPAPP placed highlight on the people’s passion for peace and their efforts in working together amidst diversity.

The Peace Buzz is a caravan that will travel nationwide to showcase and highlight the peacebuilding efforts of the government and provide updates on developments in the peace process. The Peace Buzz will drop by key cities to engage and collaborate more with different stakeholders.

The Peace Buzz kicked off in Baguio City which featured a framed prayer offering for Marawi citizens residing in Iligan. It then proceeded to Quezon City with the ceremonial ringing of the World Peace Bell. Afterwards, it went to Legazpi City, Albay and was joined by Bb. Pilipinas Grand International 2017 and National Peace Ambassadress Elizabeth Clenci, to entertain the children and disabled folks residing in Sagrada Familia Foundation.

Tomorrow, the Peace Buzz will commence its Mindanao expedition, starting in Butuan City, followed by stops in Davao City, Cotabato City and will conclude in Iligan City for the closing of the peace month on October 1.