BAGUIO CITY – During the event of the 29th founding anniversary of the Cordillera Administrative Region (CAR), Presidential Adviser on the Peace Process Jesus G. Dureza underscored the importance of the strides of the peace process in pursuing the region’s aspiration for self-determination and autonomy.

In his speech before the Cordillera stakeholders read by OPAPP Director Susan Marcaida on Friday, July 15, Dureza lauded the peace process with the Cordillera Bodong Administration–Cordillera People’s Liberation Army (CBA-CPLA) as a “partnership that put an honourable end to the army that has once defended and upheld the rights of the generation that started the struggle for self-determination and autonomy”.
To date, the CPLA already ceased to exist as an army and is now registered as Cordillera Forum for Peace and Development, a socioeconomic organization, in the Securities and Exchange Commission. 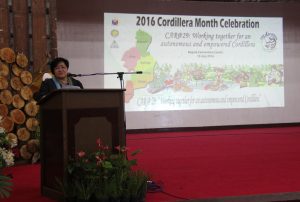 Director Susan Marcaida of the Office of the Presidential Adviser on the Peace Process (OPAPP) delivers the message of Secretary Jesus G. Dureza for the 29th founding anniversary of the Cordillera Administrative Region (CAR). In his message, Secretary Dureza stressed on the importance of the accomplishments of Cordillera peace process in pursuing the region’s bid for autonomy.

CBA-CPLA started the call for self-determination and preservation of traditional lifeways of Cordillera in 1986.
In September 1987, the Philippine Government and the CBA-CPLA forged the Mt. Data Peace Accord or sipat (cessation of hostilities). It culminated with the signing of Memorandum on Agreement “Towards the Final Disposition of Arms and Forces of the CBA-CPLA and its Transformation into a Potent Socio-economic Unarmed Force” in July 2011.
At the same time, the peace adviser acknowledged all those who have contributed to the region’s peace history.
“The Cordillerans can be proud that you are the ones who first proved that the pursuit of an ideal is possible under a democratic political climate–that a legitimate grievance can be addressed without the need for arms and violent conflict,” he added.
“Cordillera has indeed come a long way, from being a collection of provinces separated into two political regions, to fighting the abuses of the Martial Law, to struggling within the tribal and ethno-linguistic differences that continuously divide communities, to dealing with the decisions of politicians which did not always address the needs of the people, and to finding its own place as one region united in distinct culture and lifeways, charting its own journey and destiny.” 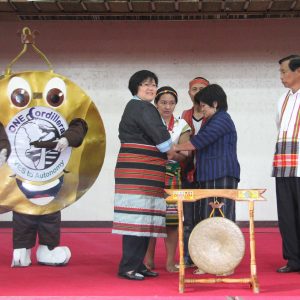 Executive Order No. 220, s. 1987 signed on 15 July 1987 established the CAR as a preparatory step for an autonomous region.
“Autonomy remains a legitimate advocacy of the region and its peoples,” Dureza stressed.
The peace adviser reiterated that the centrepiece of President Rodrigo Duterte’s agenda which is the shift from a unitary to a federal form of government, is relevant to the Cordillera’s aspiration for autonomy.
“Federalism mirrors the purpose of autonomy, which is to have greater local power and access to resources for the region. If the President’s campaign succeeds and the Filipino nation wills it, this change in system can effectively address what the Cordillerans have been advocating all along.”
Dureza appealed to the Cordillerans to study President Duterte’s proposal and convince their legislators on how the region can benefit from federalism, and participate in the process.
“We are in a new administration and hopes are high that the change we have been waiting for has finally arrived. I will, however, add that for change to be substantial and enduring it requires the collective effort of all,” Dureza emphasized.
By George Michael Oribiana| 2016-11-15T09:02:10+00:00 July 19th, 2016|CBA-CPLA, News|0 Comments

About the Author: George Michael Oribiana

George Michael D. Oribiana is a writer at the Communications Group of the Office of the Presidential Adviser on the Peace Process. He previously worked as content producer in a peace and development organization and a broadcast media entity. He is advocating peace promotion, heritage conservation, development of local movie industry, and ecotourism through blogging and photography.