SAN FERNANDO, La Union, August 1, 2018 — The leadership of the Cordillera Administrative Region (CAR) is hopeful that the successful passage of the Bangsamoro Organic Law (BOL) will pave the way for the region’s own autonomy as provided for by the 1987 Constitution. END_OF_DOCUMENT_TOKEN_TO_BE_REPLACED

MANILA, April 27, 2018 – Presidential Peace Adviser Jesus G. Dureza showcased the inclusive approach of the government in peacebuilding during a briefing with the Filipino community at the Philippine Consulate in New York City yesterday. END_OF_DOCUMENT_TOKEN_TO_BE_REPLACED

BAGUIO CITY, 20 April 2018 – The Cordillerans rallied their support for the creation of the Autonomous Region of the Cordillera (ARC) during the first public hearing initiated here yesterday by the House of Representatives. END_OF_DOCUMENT_TOKEN_TO_BE_REPLACED

BANGUED, Abra – From arms to amity. The Office of the Presidential Adviser on the Peace Process (OPAPP) and the Armed Forces of the Philippines (AFP) proposed the formation of the Peace and Development Forces (PDF) to former Cordilleran rebel groups as part of the peace agreement between the government and the Cordillera Bodong Administration-Cordillera People’s Liberation Army (CBA-CPLA) on Wednesday morning. END_OF_DOCUMENT_TOKEN_TO_BE_REPLACED

QUEZON CITY – Senator Juan Miguel “Migz” Zubiri declared on Wednesday morning, that he will author a Senate bill for the establishment of the Autonomous Region of the Cordillera to support the Cordillerans’ aspiration for self-determination, and the pressing need for autonomy. END_OF_DOCUMENT_TOKEN_TO_BE_REPLACED

BAGUIO CITY – Peace Adviser Jesus G. Dureza was honored as the “adopted son of Cordillera” by the Regional Development Council (RDC) and tribal leaders of Cordillera Administrative Region (CAR) during the Gong Relay event in Baguio City Hall as part of the celebration of 30th anniversary of the region.

The RDC commended the secretary for his unparalleled support for Cordilleran autonomy and unwavering efforts to provide peace and development in the country, calling him as “Mansapit”, a Kankanaey word that means peace-maker or savior.

Aside from the certificate of adoption, Sec. Dureza was also given tokens, such as a gangsa (Cordillera type of Gong), spear, shield and loincloth.

In his speech, Sec. Dureza reiterated the importance of consulting the bigger table, the people’s peace table, in order for the Cordillerans’ goal of achieving full autonomy be realized.

“Cordillera is not only composed of officials that represent you in the same manner that when I talk to the rebels on our negotiation, I openly refer to them as small table. The bigger table is the public, they are the stakeholders.”

The Secretary also announced that after President Duterte receive the draft of Bangsamoro Enabling Bill on Monday, he will meet with the Cordilleran groups to discuss the draft of the House Bill 5343 “An Act Establishing the Autonomous Region of Cordillera” on Tuesday so they can voice out their aspirations to the President.

“I talked to the President before I went here. I said “we’re moving decisively on the Bangsamoro. Let us not leave the Cordillerans behind,” the secretary said.

The passing of the Unity Gong from one CAR province to another symbolizes their unity, and calls for support for full autonomy and cultural preservation.The Gong Relay event also featured the ceremonial beating of Gong by local government officials, and its turn over from Baguio to Benguet. ###

Government negotiators tasked to secure peace with the National Democratic Front (NDF) motored to Baguio City today to hold a two-day consultation-workshop with government officials and community leaders of the Cordilleras on proposed social and economic reforms being discussed with communist guerrillas.
The consultation-workshop, being held at the Albergo Hotels, also seek to solicit inputs from the local officials and community leaders of the Cordillera Administrative Region (CAR) regarding concerns on the proposed joint ceasefire agreement with communist rebels.
“This activity is part of the government panel’s nationwide consultations with relevant stakeholders to collect inputs, test the validity of its positioning and encourage buy-ins for the on-going peace negotiations,” explained former Agrarian Reform Sec. Hernani Braganza, the panel member supervising the discussions on the Comprehensive Agreement on Social and Economic Reforms (CASER) and joint ceasefire agreement.
“We are your negotiators. What we want to discuss in the negotiating table with the NDF is your position on issues affecting your communities. Now is the time for the Cordillerans to speak up and voice out your concerns with regard to the peace negotiation,” Braganza added.
He explained that the outputs of the consultation-workshop, held under the auspices of the Regional Development Council (RDC) and the Regional Peace and Order Council (RPOC), will be included as inputs to the fifth round of formal peace negotiation with the NDF scheduled in The Netherlands from May 27 to June 1, 2017.
The government and the NDF had previously conducted four rounds of formal peace negotiations under the term of President Rodrigo Duterte, achieving breakthroughs in CASER discussions, ceasefire agreement and implementation of the Comprehensive Agreement on Respect for Human Rights and International Humanitarian Law (CARHR-IHL).
For CASER, both panels had agreed to accelarate the discussion through formation of bilateral teams that meet regularly in Manila in between formal rounds of peace negotiation. The discussions intend to flesh out an agreement on free land distribution for a proposed agrarian reform program.
During the fourth round of peace talks, held in Noordwidjk Ann Zee in The Netherlands last March, both panels also agreed to craft a joint ceasefire agreement that will provide cessation of hostilities pending the signing of a final peace agreement. The terms of reference (TOR) of the joint ceasefire is now under discussion in Manila.
The third round of peace talks, held in Rome last January, produced an agreement providing supplementing guidelines for the operationalization of the Joint Monitoring Committee (JMC) of the CARHR-IHL.
The CARHR-IHL was signed by the government and the NDF in 1998, but it was only under the term of President Duterte that it was made fully operational.
The agreement recognized the need to apply human rights principles when responding to the armed conflict. It obligated both parties to promote the respect of and adherence to international humanitarian law among its forces. It emphasized the urgency of protecting the civilian population.
Braganza noted that side from CASER and joint ceasefire, both panels will also discuss their respective positions on the proposed Comprehensive Agreement on Political and Constitutional Reforms (PCR) on the next round of talks in The Netherlands.
“At the moment, discussions were being conducted extensively on CASER since forging an agreement on social and economic reforms is acknowledged by parties to be central to reaching unity and peace,” he explained.
“We will also focus on the joint ceasefire since forging a bilateral ceasefire is considered to be of parallel importance to provide an enabling environment for reforms to take place,” he added.
Braganza said the consultation-workshop in Baguio City is the first under the RDC and RPOC mechanism, and will be replicated in other regions in between formal rounds of negotiations abroad.
“We will try to bring to the negotiating table as many voices as possible. The final peace agreement is not for government, but for the entire Filipino nation,” he pointed out.
By Office of Presidential Adviser on the Peace Process|2017-05-15T00:33:19+00:00May 15th, 2017|CBA-CPLA, CPP-NPA-NDF, News|0 Comments
Read More

BAUKO, Mountain Province (24 April 2017) – “There should only be one united effort towards autonomy for the Cordillera, that is our main intention.” This was the message of Presidential Peace Adviser Secretary Jesus G. Dureza during the first Forum on Cordillera Administrative Region (CAR) Regional Autonomy dubbed as “Pioneer Cordillera Champions Coming Together” held at Mount Data Hotel in Bauko, Mountain Province on Monday.

The forum attended was attended by 200 participants including representatives of various Cordillera rebel factions and other groups namely the CPLA and Cordillera Bodong Association (CPLA-CBA), Cordillera Peoples Alliance (CPA), Cordillera Broad Coalition (CBC), Cordillera Regional Consultative Commission (CRCC), and North Luzon Coalition for Good Governance (NLCGG), civil society, local government units and national government agencies.  It was organized by the Cordillera Regional Development Council and NEDA-CAR in partnership with the Office of the Presidential Adviser on the Peace Process as a venue for continuing dialogue with Cordillera peace stakeholders.

The Cordillera groups together with the local chief executives and representatives of the six provinces of the Cordillera and the City of Baguio expressed total support for the passage of House Bill 5343, “An Act Establishing the Autonomous Region of the Cordillera” which was filed recently in Congress.

In the same event, OPAPP Undersecretary for Peace Accords Nabil Tan, who was part of the initial efforts in the establishment of the Autonomous Region on the Muslim Mindanao (ARMM), shared the initial challenges of transformation into an autonomous region.  He advised that the CAR people should understand and support the movement for autonomy prior to the conduct of a plebiscite.

Baguio City Mayor and CAR Regional Development Council (RDC) Chair Mauricio Domogan said that the new proposed bill reiterates the Cordillera people’s united stand for genuine regional autonomy. “We had been totally neglected by the national government for a long period of time and so it is time to support and pass the bill,” said Mayor Domogan.

BAUKO, MOUNTAIN PROVINCE (25 April 2o17)- Five major factions and groups in Cordillera converged here on Monday to unify their ranks towards healing and reconciliation, as they strongly pushed for Cordillera autonomy as a step towards federalism.

END_OF_DOCUMENT_TOKEN_TO_BE_REPLACED 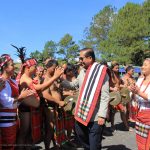 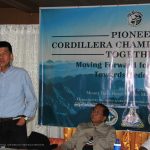 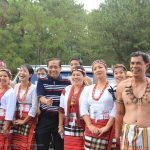 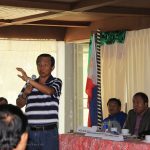 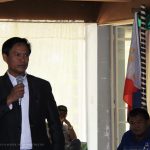 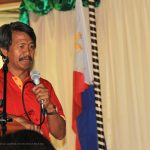 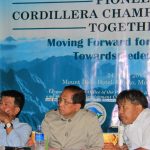 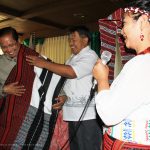 “Napakahalaga na makarating ito sa stakeholders mismo… Go for selling this to your people on the ground. Hindi lang dito sa itaas, hindi lang sa mga political leaders, hindi lang sa mga CSOs, yung taong bayan mismo must have the ownership, hindi lang yung maiintindihan nila pero aakuin din nila na kanila ‘yan,” Sec. Dureza also emphasized that aside from having a strong and united voice in pushing for Cordillera’s autonomy, it is also important that the Cordillerans themselves must have the ownership of the responsibility to fight for their cause. #PILIPINOtayoPEACEtayo