Bangsamoro local leaders, political families and Moro royal clans came to witness the opening of the BTA session after heeding the call of the President for unity.

“The diverse representation now in the BTA speaks volumes of your answer towards that call for unity, for shared responsibility, and the invitation to advocate peace and development in the Bangsamoro region,” President Marcos said in his keynote address. 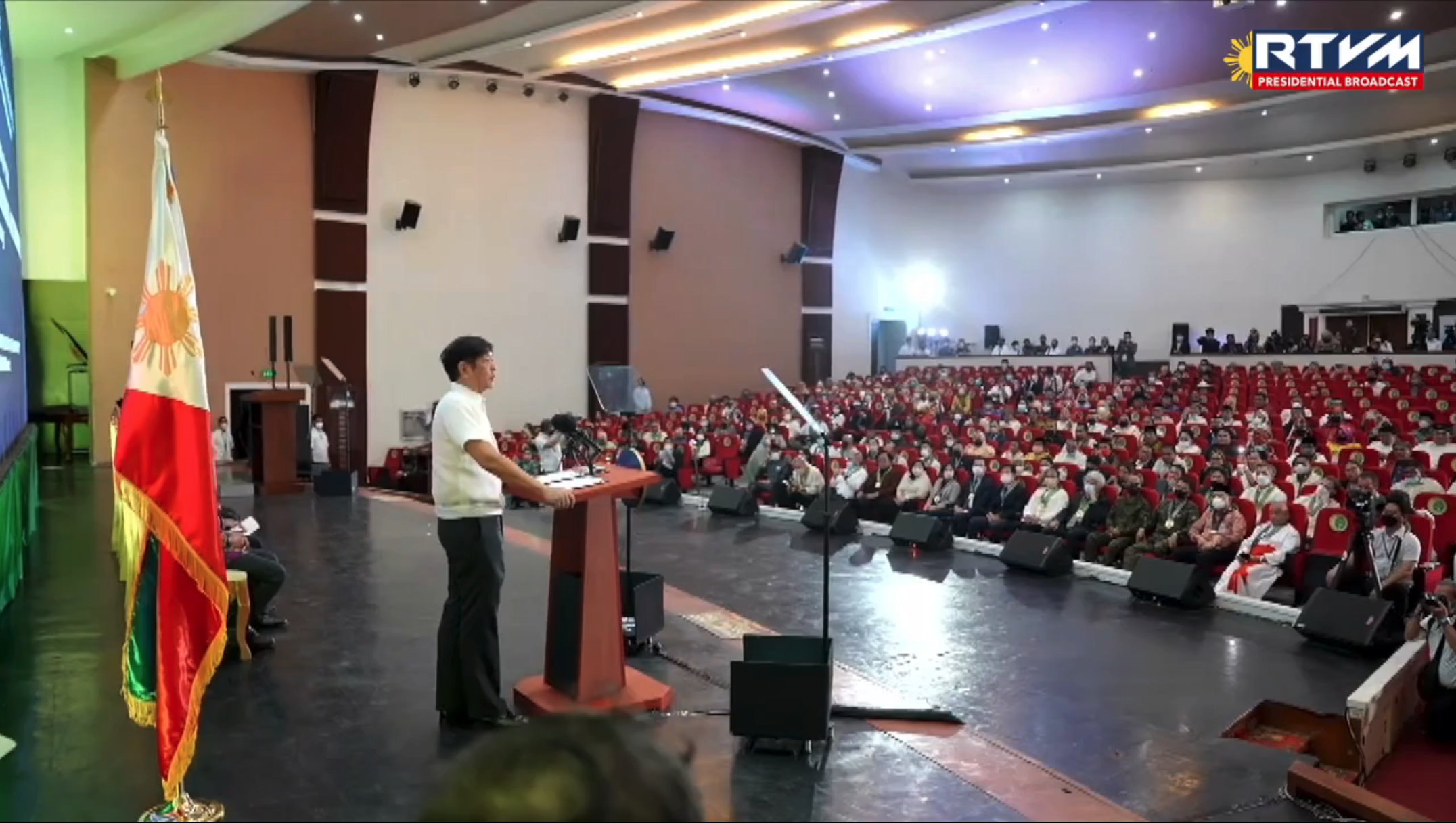 The President noted the major accomplishments of the previous BTA, which include the passage of the Bangsamoro Transition Plan, Local Administrative Code, Civil Service Code and the Education Code.

“At this point, we noted the gains as [BARMM] Chief Minister Murad [Ebrahim] has enumerated in his own message. You have already accomplished a long line of achievements…These are cornerstones of BARMM moral self-governance,” President Marcos said.

“[With] the establishment of your offices and their functions, I look forward to the fulfilment of your vision to realize a united, enlightened, self-governing, peaceful, just, morally upright and progressive Bangsamoro,” he added.

In his remarks, Murad, the BARMM chief minister, noted that the BTA’s inauguration “marks the beginning of a new chapter in the Bangsamoro’s quest for long lasting peace and development in our homeland.”

“Just like what we did during the inauguration of the BTA, we once again take our oath of moral governance as a symbol of our renewed commitment to dutifully finish the transition period,” he said. 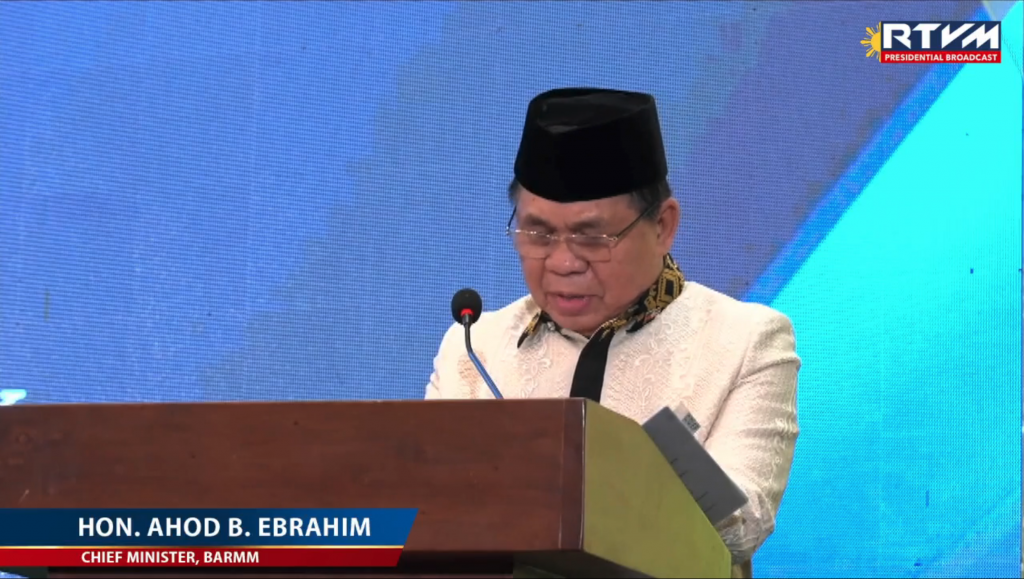 According to Murad, on top of the BTA’s priorities is to “fight the ills governance” and “fulfil our Amanah, our trust to the Bangsamoro people,” as he highlighted the major achievements of the transition body during its previous three-year term.

“The BARMM has recorded the most significant reduction in terms of poverty incidence among families from 59.9% in 2018 to 29.8% in 2021. The BARMM recorded the highest and the only double digit reduction,” he said.

“The BARMM’s economy also increased by 7.5% which makes us the fastest growing region in the country. We registered the highest growth in terms of values in production of agriculture and fisheries at 7.2% in 2021,” Murad added.

The chief minister assured the President that the BTA will focus on completing all priority legislation such as the “Bangsamoro Electoral Code, and the Bangsamoro Local Government Code if not by the end of the year, then by the 1st quarter of 2023.”

For the remainder of the transition period, he said the body will enact the Bangsamoro Indigenous Peoples’ Rights Act, Gender and Development Code, Internally Displace Peoples Law, Magna Carta for Persons with disabilities, Irrigation Systems Bill and the Energy Development Corp. of the Bangsamoro Charter.

“Rest assured Mr. President, we will complete all the transition priorities and finish setting up a government not only ready for peaceful and orderly elections in 2025, but also a government capable of continuing the transformation of the BARMM into a progressive and responsive region,” Murad said.

“The peace process started during your father’s time, and it would be a fitting end to this long journey if we could complete the process during your administration,” Murad said. He said the full implementation of the Bangsamoro peace agreements will be one of the “greatest legacies” of President Marcos.

Former House of Representatives Deputy Speaker and former MNLF leader Abdulgani “Gerry” Salapuddin, who also witnessed the inauguration, related the significance of the event to the Islamic faith’s quest for genuine peace.

“In Islam, the highest deed of man in the sight of Allah, higher than all or any of the five Pillars of Islam is making peace!” Salapuddin, who is the current administrator and chief executive officer of the Southern Philippines Development Authority, said.

Commitment to BARMM’s peace and development

Aside from urging the BTA to pass the four priority codes, President Marcos also called on the transition body “to pass legislation and fiscal policy, particularly those on taxation, and to facilitate the conduct of elections in the BARMM in 2025.

“I also encourage the BTA to pass legislation that will secure the welfare of the Moro people, particularly in agri-fishery, healthcare, transportation and communication, digital infrastructure and e-governance,” the President added.

This is reason, he said, why “we are steadfast in our commitment to the peace process here in Southern Philippines. So, we push for socioeconomic development interventions to promote peace and development in areas affected by decades of conflict.”

Through its Payapa at Masaganang Pamayanan (PAMANA) Program, he said the national government had allocated more than Php 19 billion from 2017 to 2022 to carry out socio-economic interventions that will build a culture of peace in conflict-affected and conflict-vulnerable areas throughout the country.

In order to sustain the gains of peace and development in the Bangsamoro, President Marcos said the Department of Budget and Management has allocated Php 74.4 billion for the Bangsamoro region for the fiscal year 2023.

“As we celebrate National Peace Consciousness Month this September, we know that with unity and solidarity, the BTA will be successful in facilitating the institution of the Bangsamoro government – one that is centered in promoting good governance and lasting peace its people,” the President said.

“As your president, I assure you that the BTA and all the Bangsamoro people of this administration’s full and unwavering commitment to the peace process and to BARMM,” he remarked.

Presidential Adviser for Peace, Reconciliation and Unity Sec. Carlito G. Galvez, Jr. underscored the importance of the BTA inauguration, describing it as a “major milestone not only in the Bangsamoro peace process but also in the proud history of the Moro people.”

“Even two weeks before the historic meeting between Chairman Misuari and Chairman Murad in Davao City, they were still at odds with each other. The fact that they have reunited for the sake of unity and agreed to their places in the peace process is a significant achievement for the Marcos Administration and all parties concerned,” Galvez said. 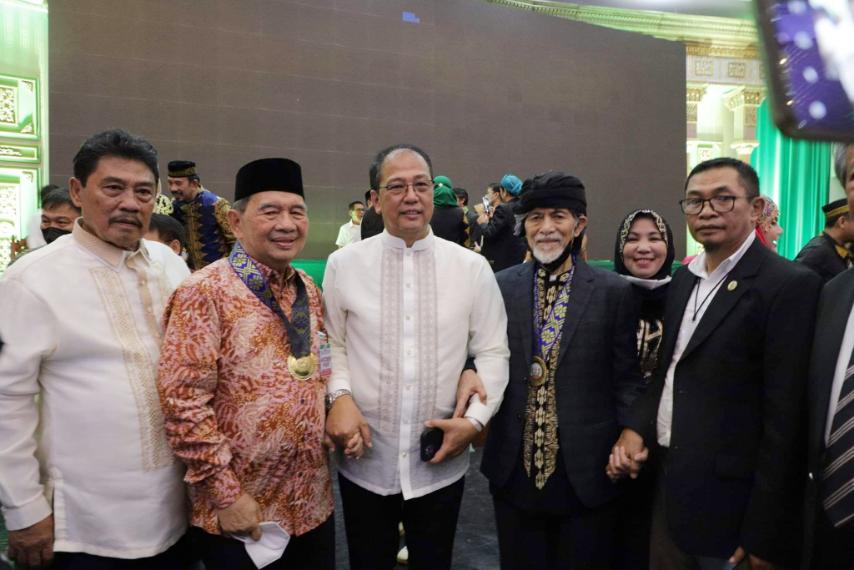 He said the BTA inauguration demonstrated President Marcos’s firm resolve to push forward and build on the gains of the Bangsamoro peace process, as he recognized the capacity of the BARMM government to carry out good moral governance.

“Since he assumed the highest post in the land, President Marcos has proven his sincerity and determination not only to bring genuine peace and sustainable development in the Bangsamoro, but also to unify the two major Moro fronts towards our collective desire for long-lasting peace not only in the Bangsamoro are but to the entire nation,” Galvez said.