Jolo bombing survivors on the road to recovery

JOLO, Sulu — In the morning of January 19, 2019, two powerful bomb explosions ripped through the Cathedral of Our Lady of Mount Carmel, claiming the lives of 20 people and injuring scores of innocent lives.

Three years after the harrowing incident, 50 of the victims are now on the way to recovery and rebuilding their lives with the aid of psychosocial healing sessions conducted by the Office of the Presidential Adviser on Peace, Reconciliation and Unity (OPAPRU).

The OPAPRU, through its Social Healing and Peacebuilding Office (SHAPEO), partnered with the Notre Dame of Jolo College to capacitate 25 local counselors and carry out 10 healing sessions among the 50 blast victims.

(For almost past two years I have been full of anger, fear, hatred for the perpetrators, hiding myself, not going to church, sad and undergoing self-pity because I bore the pain and trauma as a victim of the twin bombings in the cathedral.)

After attending the healing 10 sessions, Hoe said that she has been able to come to terms with what happened, and is now ready to leave the past behind and move on to the next chapter of her life.

(I learned to be enlightened about the tragedy that no matter what happened to me, I stand with a sincere heart because there are many who love me. First of all God, because I am still alive and so are the people around me.)

“Our journey as counselors was not easy. Imagine the struggles of re-learning the methods and ways of conducting effective counseling sessions,” related Alton Jurah, one of the counselors,

According to Jurah, he was touched to see the trust and respect that had been established among counselees during the healing sessions. Academic institutions such as the Notre Dame of Jolo have played a significant role in sustaining local peace.

“We know how brave you were to share your traumatic experiences with us. It’s not easy but you opened the doors for us to help you,” he said, as he committed to continue being a frontline responder to the counselees and victims of other traumatic events.

Hoe related that she is “now healed at handang sumuong sa magandang buhay. The Psycho-social healing (intervention) was really a great help in my life.”

(She is now healed and ready to move forward to a better life. The psycho-social healing was really a great help in my life.)

For his part, Army Maj. Gen. Ignatius Patrimonio, 11th Infantry Division commander, noted that “our challenge really is how to sustain the gains we have now achieved.”

He said that through the collaborative efforts of all peace stakeholders, the people of Sulu are now enjoying relative peace and security since the bombing incident.

“We will continue to perform our mandate to secure this region so that incident such as another bombing will not happen again…Security really is a shared responsibility and ‘yong tulong ng stakeholders really play a great role in achieving sustainable peace in the province.”

Meanwhile, Presidential Adviser on Peace, Reconciliation and Unity Sec. Carlito G. Galvez Jr., who attended the completion ceremony of the psychosocial healing sessions last August 27, assured its peace partners agency that it will continue to implement peacebuilding initiatives in the province. 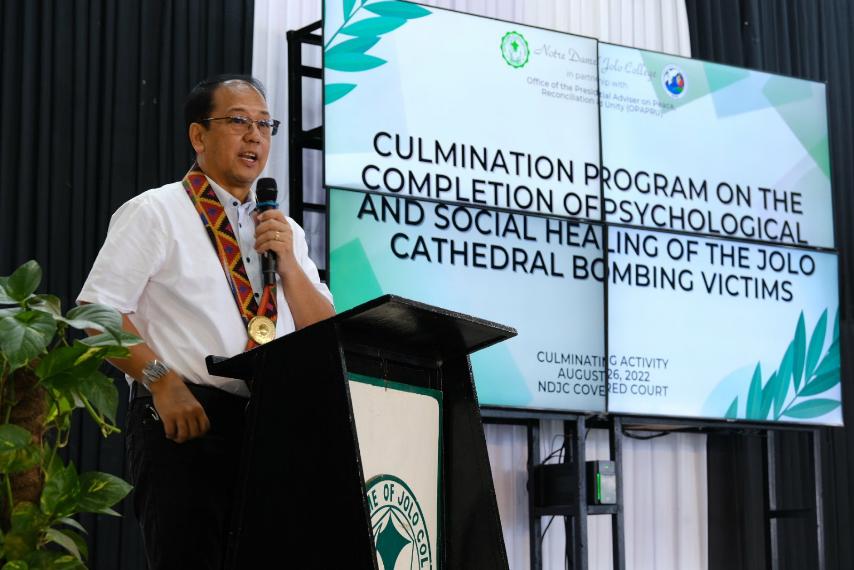 “This is not the end of our peacebuilding efforts here in Sulu. The OPAPRU shall continue to work closely with our peace stakeholders to sustain and build on the gains of peace in the province,” Galvez said.

The peace adviser emphasized, that “Under the Marcos Administration’s banner of unity, the OPAPRU, in collaboration with its peace partners, is determined to create the conditions where long-lasting peace and sustainable development can take root and flourish.”

As part of the culmination program, the OPAPRU and Ministry of Social Services and Development (MSSD) provided the beneficiaries with in-kind socio-economic assistance. 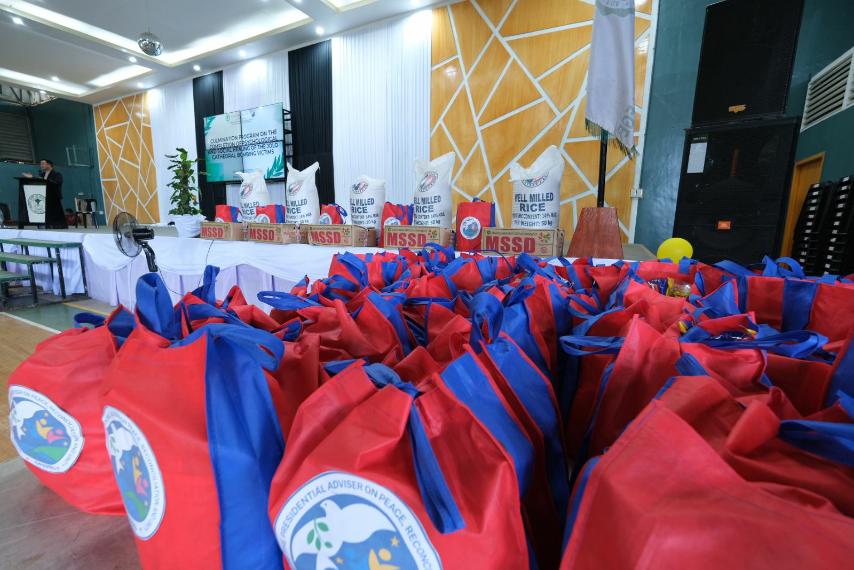 Galvez noted that academic institutions such as the Notre Dame of Jolo have played a significant role in sustaining local peace initiatives.

He said the OPAPRU is also intensifying efforts in the implementation of EO 570 through the adoption of the National Action Plan on Preventing and Countering Violent Extremism (NAP PCVE).

Galvez explained that through the NAP-PCVE, the national government will be able to effectively address the factors that contribute to radicalization and violent extremism in the Philippines. ###