This, as the President led the oath-taking on Friday of the new members of the Bangsamoro Transition Authority (BTA) in a ceremony held attended by top national and Bangsamoro government officials.

“Through your decisive action, you are ensuring the completion of the implementation of all signed Bangsamoro peace agreements, which is the centerpiece of your administration’s peace policy agenda,” he added.

Galvez noted the appointment of new members to the BTA gives flesh to the President’s peace agenda, “which underscores the importance of inclusivity and equal representation in governance.”

“As you have emphasized, Mr. President, no one should be left behind in the peacebuilding  and development process. Everyone should have a role to play and must benefit from the dividends of peace and economic progress,” he said. 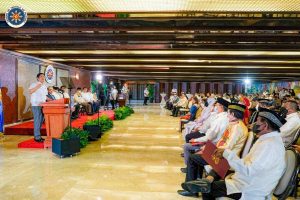 New BTA and BARMM government as ‘The United BARMM’

The participation of the the MNLF particularly under the leadership of Chair Nur Misuari is a product of the convergence effort of the OPAPRU to harmonize the Bangsamoro peace agreements: 1976 Tripoli, 1996 Final Peace Agreements, and the 2014 Comprehensive Agreement on the Bangsamoro.

Among those new members of the BTA, Abdulkarim Misuari and Nurrheda Misuari, son and daughter of Chair Misuari.

The joining of the MNLF of Chair Nur Misuari with the MILF-led BTA is auspicious and heralds a significant step towards unity in the BARMM. ###