CLARK, PAMPANGA— The Regional Task Force to End Local Communist Armed Conflict (RTF-ELCAC) 3 has been highly successful in carrying out anti-insurgency efforts and in providing the much-needed government services to communities in its area of coverage.
This was the assessment given by Presidential Peace Adviser and Cabinet Officer for Regional Development and Security (CORDS) in Central Luzon, Secretary Carlito G. Galvez, Jr., during the second quarter meeting of the RTF ELCAC 3 held here on Friday, June 24. 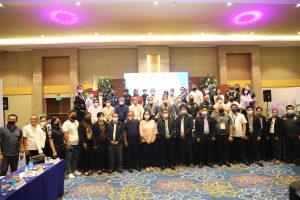 During the meeting, the peace adviser noted the major accomplishments of RTF-ELCAC 3 based on the reports of its three sub-clusters: Governance and Development; Legal and Intelligence Operations; and Peace and Security.

He stressed that the RTF3 managed to carry out its peacekeeping interventions despite the challenges in implementation.

Lt. Gen Ernesto Torres, commander of the Northern Luzon Command (NOLCOM), reported the “zero influence” of the CPP-NPA-NDF in barangays throughout the region.

Torres noted that local stakeholders have continued to support his command’s peacekeeping efforts in the region.

“Filipinos would really like to help out in ending this insurgency. Even the civilians. We have to harness the patriotism and willingness to help out our fellow Filipinos fill in the gaps that in the coming years ay mabibigyan pa rin ng karampatang budget na kinakailangan ng barangay,” he said.

According to Torres, none of the 9,854 barangays within the NOLCOM’s area of responsibility are under the influence of the CPP-NPA since the JRTF was operationalized.

“It is very important to note because ‘yung mga NPA-NPA-NDF, they thrive on the support of the masses. Kung wala na po silang masa, ‘yung kanilang resources and recruitment ay naapektohan,” he noted. 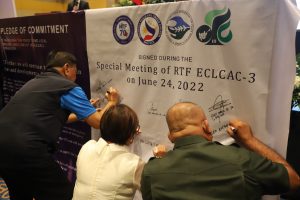 According to Governor Hermogenes Ebdane Jr, Chairperson of the Regional Peace and order Council III, the establishment of the Whole of Nation Approach (WONA) was a key lesson learned from past experiences in dealing with the communist insurgents.

Ebdane emphasized mechanisms under the WONA have been very effective, as the lines of efforts of the various member-agencies effectively complement each other in addressing the local communist armed conflict.

“We have learned our lesson from the past. We have to initiate this kind of innovation [and] provide concrete moves because from our mistakes we learn, from our successes we improve, and for the future we prepare,” he stressed.

On the other hand, Bataan Gov. Albert Raymond Garcia, chairperson of the Regional Development Council III, underscored that the structures and mechanisms of RTF-ELCAC have strengthened the government’s Whole-of-Nation approach, particularly by providing socioeconomic interventions to conflict-affected communities.

“For this reason, President Rodrigo Duterte’s administration has relentlessly pursued the attainment of a just and lasting peace. EO 70 signed in 2018 adopted the WONA to pursue an end to the decades-long communist insurgency that has been very crucial particularly in the development of conflict-affected areas,” Garcia said.

EO 70 is dovetailed to the Philippine Development Plan (PDP) 2017-2022, which focuses on the achievement of an inclusive and sustainable peace through intensified development and peacebuilding initiatives in conflict-affected and conflict-vulnerable communities.

The PDP notes that armed conflict poses serious obstacles to development. It further pointed out the challenges in implementing poverty reduction initiatives, particularly in areas affected by armed conflict.

Garcia shared that the establishment of local task forces at the provincial, city, municipal and barangay level has created a culture of collaboration and convergence between and among national government agencies, local government units, and other sectors of society.

“Although challenging, the RTF-ELCAC Central Luzon successfully reduced the number of guerilla fronts, and neutralized areas infiltrated by the communist terrorist groups, with the increasing number of local government units declaring CTGs as persona non-grata,” he said.

“We were able to denounce the unlawful and illegal activities of the communist party of the Philippines. We have successfully declared the NPA presence ‘undesirable’ in Central Luzon,” Garcia added.

He said the collaborative effort among member-agencies and LGUs of RTF ELCAC was instrumental in achieving an 86% dismantling rate of the guerilla fronts.

Garcia said that through the localized approach, the RTF III was able to arrest high-value leaders off CPP-NPA-NDF in Central Luzon, a development which created a leadership crisis in the communist terrorist groups.

“Pag nagkaroon ng leadership crisis, bumaba ‘yung moral ng mga armadong grupo to really fight. As an effect of those arrests, we had observable impact,” he pointed out.

RTF ELCAC 3 also reported the seizure of over 285 firearms from the rebels, 139 of which were high-powered weapons.

Only strategy that worked

Torres noted during the meeting that in his 30 years of military service, none of the strategies they carried out were as effective as the Whole-of-Nation Approach.

“We already tried a lot of strategies and mechanisms to combat these insurgency problems but none of them worked. So, it is the wish of the Armed Forces of the Northern Luzon na magpatuloy pa ‘yung ganitong mechanism beyond this administration,” Torres added.

Through the efforts of the Situational Awareness and Knowledge Management Cluster, the RTF-ELCAC 3 successfully facilitated the oath of allegiance of 55 former CTG members from Casiguran Aurora and the withdrawal of support of 511 members of the Central Luzon Aeta association.

The task force also conducted a consultation and insurgency awareness campaign in conflict-affected communities in Zambales.

The RTF-ECLAC 3 also reported that former supporters of 80 underground mass organizations were converted into people’s organizations as part of the task force’s efforts to prevent the resurgence of the communist group in the area.

The task force was able to strengthen the government’s presence by delivering basic services to areas vulnerable to CTG exploitation by conducting Barangay Serbisyo Caravans.

RTF ELCAC 3 also enabled its member-agencies to implement various socioeconomic and development programs such as the Php 3.7 million farm to market road in Brgy. Sa Mateo Norzagaray Bulacan under the Barangay Development Program (BDP); a Php 3.7 million housing project; and Php 7 million worth of educational assistance.

As his term as CORDS III nears its end, Galvez assured the continuity of the task force as it “[has] already presented the key issues to the Marcos administration.”

To date, over 24,000 rebel returnees across the country have laid down their arms and returned to mainstream society.

As a way forward, he said that localized peace engagements will be sustained to pave the way for the implementation of a transformation program for former CTG rebels, their families and communities.
This initiatives shall be pursued in line with the expanded mandate of the OPAPRU in undertaking advocacy measures on peace, reconciliation and unity.

As a manifestation of its unwavering commitment and steadfast support of the RTF ELCAC 3 in the government’s peacekeeping and development efforts, Galvez led the reading of the Task Force’s Pledge of Commitment, which was then signed by its vice-chairpersons and members. 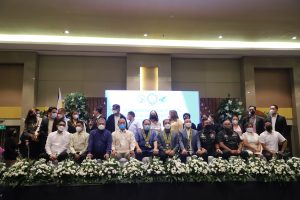