No more crawling in the jungle: Former rebels now enjoy ‘unrestrained’ life’ after laying down arms

BALER, AURORA — Pedro and Marshall (not their real names) were forced to live as nocturnals when they were still members of the Communist Terrorist Groups (CTG) based in this province.

According to Pedro, life was never easy as a former CTG. They hid during the day and silently moved at night where they would have to crawl deep in the woods so as not to be detected by patrolling soldiers.

Pedro spent five years as a training squad leader of the New People’s Army. He belongs to the Dumagat Tribe who are natives of the eastern coast of Aurora Province. 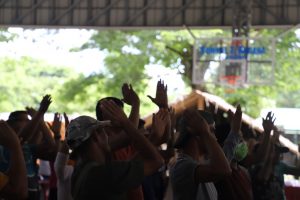 Marshall, on the other hand, was a former political guide of the Domingo Erlano Command which was operating in Casiguran, Aurora.

Walking the path of peace

Feeling exhausted from a life of being on the run, Pedro and Marshall decided to lay down their arms and surrender to authorities in 2019.

They are among the 250 former rebels (FRs) who took part in the second phase of the Peace Orientation held from June 22 to 24, 2022 at the Philippine Army’s 91st Infantry “Sinagtala” Battalion (91IB) at Camp Jaime Bitong Jr.

The three-day activity was a collaborative effort of the Office of the Presidential Peace Adviser on Peace, Reconciliation and Unity (OAPPRU) and the Armed Forces of the Philippines. 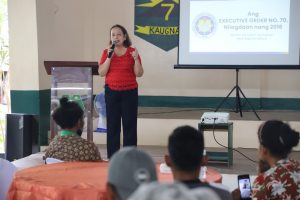 During the Peace Orientation, the FRs were introduced to various peace policies and programs being implemented by the national government.

The National Intelligence Coordinating Agency (NICA) 3 shared the salient provisions of EO 70, which created the National Task Force to End Local Communist Armed Conflict (NTF-ELCAC), while the OPAPRU gave a briefing on E0 158 (s.2021) which expands the agency’s mandate to include interventions to foster reconciliation and unity throughout the country.

The OPAPRU supports the NTF-ELCAC as the co-lead agency of the Localized Peace Engagement (LPE) Cluster, which is tasked to mainstream LPE and pave the way for the implementation of a Transformation Program (TP) for former CTG rebels, their families and communities.

Marshall has received benefits under E-CLIP early in June of this year. He was given Php 70,000 in financial assistance plus a sack of rice and bags of groceries from the Department of Trade and Industry.

Pedro and Marshall are now earning regular incomes as coconut farmers. According to them, they are now living an ‘unrestrained’ life after they were welcomed back into the community.

When President Rodrigo Duterte assumed the presidency in 2016, he vowed to put an end to the decades-long communist insurgency in the country. 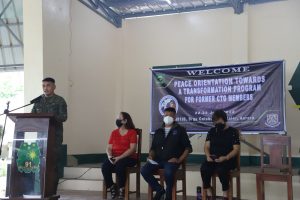 “We will strive to have a permanent and lasting peace before my term ends. That is my goal, that is my dream,” the President said during his 2016 State of the Nation Address.

After President Duterte terminated peace talks between the national government and communist rebels in November 2017, he issued Executive Order No. 70 in December 2018 which mandated a whole-of-nation, whole-of-society approach in addressing the communist insurgency.

Presidential Adviser on Peace, Reconciliation and Unity Sec. Carlito G. Galvez, Jr. said that the agency will continue to help transform the lives of the FRs and their families and uplift their socioeconomic well-being.

“As we transition to the next administration, the Office of the Presidential Adviser on Peace, Reconciliation and Unity will work even harder to ensure that the FRs and their next of kin will enjoy the dividends of peace and development,” Galvez said. ###