Duterte Administration will leave behind a legacy of peace – Galvez

PASAY CITY — Major gains have been achieved in the comprehensive Philippine peace process under the leadership of President Rodrigo Roa Duterte.

This, according to Presidential Adviser on Peace, Reconciliation and Unity Secretary Carlito G. Galvez, Jr. during the second and final day of the Duterte Legacy Summit held on Tuesday, May 31.

The event gave cabinet officials the opportunity to highlight the achievements, policies, and projects of their respective agencies which have made an impact on the lives of the Filipino people over the past six years.

In his presentation, Galvez recalled the promise made by President Duterte in his 2016 inaugural address wherein the chief executive said that his administration “is committed to implement all signed peace agreements in step with constitutional and legal reforms.”

“The peace process flourished under the leadership of President Rodrigo Duterte. Being the first Mindanaoan president, he has a very deep understanding of the Bangsamoro peace process and he always knew what had to be done to sustain the gains of peace,” he said. 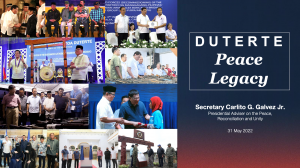 Towards a more peaceful and progressive Mindanao

The peace adviser noted that the programs implemented by the OPAPRU, together with other line agencies, local government units and peace partners, have contributed to the relative peace being enjoyed by the country over the past six years, particularly in the Bangsamoro Autonomous Region in Muslim Mindanao (BARMM) as well as other conflict-vulnerable and conflict-affected parts of the country.

Galvez said the absence of major conflicts since the Marawi siege in 2017 has led to increased economic activity and growth across the Bangsamoro region.

“The gains in peace have facilitated private sector confidence as evidenced by the increase in investment generation, and socioeconomic improvement as seen in the decrease in poverty incidence which is at its lowest in the BARMM,” he pointed out.

Galvez said the BARMM’s economy expanded by 7.5% in 2021, and in fact, recorded the second fastest growth among all the regions in the country. 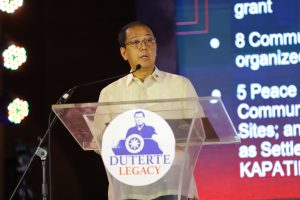 Galvez emphasized that President Duterte was determined to realize his commitment to attain “inclusive and sustainable peace” for the country, leading to the crafting of the national government’s Six-Point Peace and Development Agenda which was launched in 2019.

The said Peace and Development Agenda, which is mirrored by the Peace and Development Roadmap of the Duterte Administration, covers the following: meaningful implementation of the Framework Agreement of the Bangsamoro (FAB) and Comprehensive Agreement on the Bangsamoro (CAB) towards healing in the Bangsamoro; the completion of the implementation of the remaining commitments under the GPH-Moro National Liberation Front (MNLF) Peace Agreement for a just closure; the accelerated signing and implementation of peace accords with communist insurgents; the immediate conclusion of the peace process with the Cordillera People’s Liberation Army (CPLA) and the Rebolusyonaryong Partido Ng Manggagawa-Pilipinas/Revolutionary Proletarian Army Alex Boncayao Brigade (RPP-RPA-ABB); and peace-promoting catch-up socio-economic developments in conflict affected areas, and building of a culture of peace and conflict sensitivity.

Galvez said the historic signing of the Clarificatory Implementing Document (CID) with the Rebolusyonaryong Partido Ng Manggagawa-Pilipinas/Revolutionary Proletarian Army/Alex Boncayao Brigade (RPP-RPA-ABB) Tabara Paduano Group or KAPATIRAN on July 19, 2019 was a major turning point in the peace process with the revolutionary group.

The signing of the CID, he said, helped fast track the transformation process of the group’s members into peaceful and productive civilians.

President Duterte witnessed the decommissioning of 727 KAPATIRAN members on September 19, 2019 wherein all members received a livelihood settlement grant amounting to Php 50,000.00 each.

Policing in the Bangsamoro

This is contained in Art. 11, Sec. 2 of RA 11054 or the Bangsamoro Organic Law (BOL), which is a realization of the commitments made by the national government under the political track of the Comprehensive Agreement on the Bangsamoro (CAB).

Galvez concluded his presentation by honoring President Duterte, saying that all the peacebuilding programs were successfully carried out because of the steadfast commitment of stakeholders, and most of all, the guidance and support given by the chief executive.

“This is a result of our collective efforts and continuing commitment to work together in pursuing a just and lasting peace and sustainable development of course fueled by the sincerity and determination of no less than President Rodrigo Duterte,” he said. ###