These interventions will be implemented under the RTF-ELCAC 3’s Localized Peace Engagement as Phase 2 of the program was formally launched during the task force’s Ways Forward Summing Up Meeting on Wednesday, April 27, held via teleconference.

The first phase of the RTF-ELCAC 3’s LPE program concluded on February 24, 2022. Its major accomplishments include the dismantling of guerrilla fronts; surrender of mass organizations; protection of the youth and poor sector; socio-economic gains achieved due to improved security conditions in communities; and the active leadership role of our LGUs in advancing ELCAC work.

Presidential Adviser on Peace, Reconciliation and Unity Sec. Carlito G. Galvez, Jr. highlighted these achievements during the meeting, as he underscored the importance of collaboration among the RTF-ELCAC 3’s 12 clusters.

“I would like to emphasize that it was through the decisive and coordinated action of the RTF-3 in the implementation of the programs and projects of local government units, member agencies and the private sectors that we were able to achieve these significant results.” Galvez said.

The LPE is one of the 12 lines of effort of the NTF-ELCAC which was created through Executive Order No. 70 signed by President Rodrigo Roa Duterte’s in 2018.

EO 70 mandated a whole-of-nation, whole-of-society approach in addressing the root causes of the communist insurgency which includes poverty, among others. 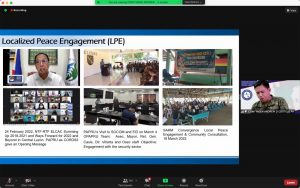 Zambales Provincial Governor Hermogenes Ebdane Jr. said the implementation of EO 70 has come a long way since it was signed by President Rodrigo Duterte in 2018.

According to Ebdane, EO 70 has yielded many positive results, among which is ensuring peace and security in the barangays.

“Now we can confidently say that under this successful institutionalization of the whole- of-nation approach to end local communist armed conflict, we have attained inclusive and sustainable peace and development throughout the country especially in our region, the Central Luzon,” the governor said.

“Among our major victories were the successful implementation of the support to barangay development program in the province of Bulacan in 2021, the declaration of all 137 local government units of the CPPA-NPA as persona non grata, and the official dismantling of the Kilusang Larangang Guerilla Sierra Madre which was one of the fronts of insurgency in the region.” Ebdane added.

The RTF-ELCAC 3 has three sub-clusters: Governance and Development; Legal Intelligence and Information; Peace and Security.

Each of the talk force’s sub-clusters presented their key accomplishments, challenges in implementation, as well as ways forward.

Among the ways forward to be implemented under phase 2 of the LPE Program include livelihood support and long-term intervention for the former rebels and their families; the provision of financial assistance for eligible former rebels; community consultations; and the continuous dismantling of members of CTG front organizations.

Dir. Maria Luisa De Guzman of the Legal and Intelligence Operation Sub-cluster said they will continue to facilitate the return of rebels to the folds of the law, and those who would like to withdraw their support from communists terrorist groups.

“Along with AFP, PNP, DTI, TESDA, CDA, PIA, we will continue to facilitate [the]withdrawal of support of former rebels from communist terrorist group, the CTG members and well as surrenderees.” De Guzman said.

“From January to April, two community consultations were successfully held in Aurora which engaged 113 former rebels and CTG supporters,” she added.

Members of the task force agreed that the body also needs to focus on conducting terrorism awareness lectures for the youth sector, particularly for students.

Galvez noted that students, particularly those under the K-12 program, are among the most vulnerable to recruitment by the CTGs.

“Usually, ‘yung target nila marecuit ay yung mga talented, intelligent, those in the student council,” he said during the discussions.

“The Gen-Z, hilig nila mag-explore and experiment, making them vulnerable sa early CTG recruitment, especially those who are under loose supervision,” Galvez added.

Meanwhile, May Eclar of the Department of Education, said they will reinforce the ‘Kabataan ayaw sa Droga at Terorismo’ campaign which covers terrorism awareness lectures.

As the Duterte administration nears the end of its term, Galvez reminded the task force to be more purposive and determined in carrying out efforts to put an end to the decades-long communist insurgency in the country.

“With the expanded mandate of the OPAPRU through E.O 158, we shall consolidate, integrate and harmonize all local efforts on peace, reconciliation and unity so that we can put end to the cycle of armed conflict, promote community resilience, bring about good governance and transform the lives of former rebels and their families into peaceful and productive citizens,” Galvez said. ###