Cotabato City — “Rest assured, as I promised when I was Chief-of-Staff [of AFP], that all my life, with the National Defense Secretary [Lorenzana], all our life, we will dedicate for the peace process.”

“We know that there is much work to be done as the Duterte Administration’s term comes to an end. But we believe that with the strong partnership we have developed, we shall overcome the challenges that come our way,” the Peace Adviser said.

Top officials of the National and Bangsamoro Autonomous Region in Muslim Mindanao (BARMM) governments met to reaffirm their commitment to push forward the Bangsamoro peace process and continue the legacy of peace of the Duterte Administration.

Both governments said they are determined to fulfill the commitments they have made under all signed peace agreements. 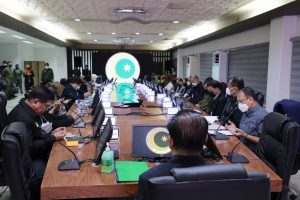 “I am extremely happy to welcome Secretary Galvez and our dear partners from the national government inside the Bangsamoro Government Center. While this may not be your first time being here, the sight of seeing all of us sitting side by side in this hall is remarkable,” Ebrahim said.

“It brings back memories of our work in establishing the BARMM. Let us also take this opportunity to celebrate our shared wins of what may very well be our greatest legacy for Mindanao and the rest of the country,” he added.

“May the bond that we have nurtured over the years continue to inspire us to work together in promoting the culture of peace, mutual understanding and solidarity, as we move forward as one people and one nation,” the peace adviser said.

Sustaining gains of peace in the Bangsamoro

During the gathering, the national and BARMM officials discussed the status of implementation of the various peacebuilding initiatives being jointly carried out by their governments under the political and normalization tracks of the Comprehensive Agreement on the Bangsamoro (CAB). 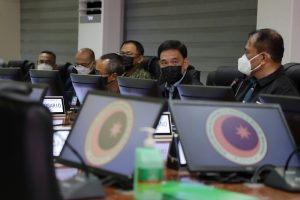 PBGen Arthur R. Cabalona, regional director of Police Regional Office Bangsamoro Autonomous Region (PRO BAR) said that as part of the PNP and NAPOLCOM’s commitment to the peace process, they will start reviewing the documents submitted by the applicants ten days before the date of their examination.

He added the process for application for the National Special Qualifying Eligibility Examination (NSQEE) will start within the month, while “the recruitment process will start after Ramadan.”

Galvez also briefed the Bangsamoro officials on the status of implementation of the interventions under the normalization track of the Comprehensive Agreement on the Bangsamoro (CAB), particularly its security component which includes the program on the Disbandment of Private Armed Groups (DPAGs).

As of April 1, 2022, the National Task Force for the Disbandment of Private Armed Groups (NTF-DPAGs) has disbanded a total of 15 PAGs which have all also been approved for delisting based on the recommendation made by the Joint AFP-PNP Intelligence Committee (JAPIC).

Meanwhile, officials from the National Vaccine Operations Center (NVOC) headed by OPAPRU Director Mae Ballena and Dr. Sham Ufano and Dr. Ma. Paz Coralles of the Department of Health (DOH) also met with BARMM officials to discuss the conduct of the Special Vaccination Days to be held in the region next month.