GENERAL SANTOS CITY– The Government of the Philippines – Moro National Liberation Front (GPH-MNLF) Coordinating Committee’s Confidence-Building Subcommittee held its first meeting here on Thursday, March 25, as part of the body’s efforts to fulfill the commitments made under the 1996 GPH-MNLF Final Peace Agreement (FPA).
In his opening statement, Mr. Alhabsi Hassan, chair of the MNLF Confidence-Building Subcommittee, conveyed his appreciation to the tenacity, determination, and sincerity of Secretary Carlito Galvez, Jr. for his remarkable initiative in working for a lasting peace. He further expressed that may this endeavor be continued by his successor as the MNLF aspires for the continuity of these programs.
Uttoh Salem Cutan, Chair of the MNLF Coordinating Committee, is among the participants of the said meeting. In his message, Chair Cutan said “We hope we continue what we have started for the success of the peace process that will lead to the final peace agreement for the development of the long and lasting peace for Mindanao and the Bangsamoro people”.
Office of the Presidential Adviser on Peace, Reconciliation and Unity (OPAPRU) Director Jana Gallardo, who also chairs the Confidence-Building Subcommittee, gave an overview of the MNLF Transformation Program.
Gallardo explained that the program aims to provide socio-economic interventions to MNLF combatants, their families and communities.
“Through the program’s various components – Socio-Economic, Confidence-Building Measures, Security and Community Healing and Reconciliation – we seek to address the needs, as well as respond to the concerns of our MNLF brothers and sisters,” Gallardo said.
Atty. Rey Benitez of OPAPRU’s MNLF Concerns Office presented the national government’s Amnesty Program for the MNLF members under Executive Order 125 (s. 2021) and Proclamation 1091 (s. 2021), which were issued by President Rodrigo R. Duterte on 5 February 2021. Executive Order 125 creates the National Amnesty Commission (NAC) while Proclamation 1091 provides the grant of amnesty to MNLF members who have committed crimes punishable under the Revised Penal Code and special penal laws in furtherance of their political beliefs. Proclamation 1091 was concurred by the Senate on 24 January 2022 and by the House of Representatives on 19 May 2021. 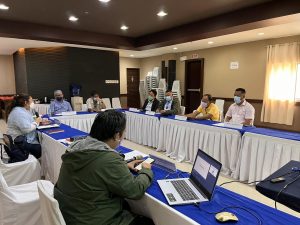 According to Benitez, the MNLF Amnesty Secretariat has conducted a series of consultations with key sectors and stakeholders, including the MNLF, as part of preparations for the processing of amnesty applications of MNLF members who would avail of and qualify for the program.
OPAPRU Director Vanesa Dir. Vanessa Pallarco introduced the OPAPRU’s Social Healing and Peace Building Program (SHAPE), which aims to repair the torn social fabric of society caused by violence and armed conflict.
Pallarco’s presentation highlighted the need to reach out to the most vulnerable sectors of the community, particularly women and children.
During a focus group discussion, members of the Confidence-Building Subcommittee identified the following key consensus points:
First, trust is the essential component of the confidence-building measures between the Government and the MNLF;
Second, sincerity in the intent and actions of both the Government and the MNLF reinforces the trust being built as it should overcome and resolve all issues of mistrust, doubt, and reservations between the parties, thereby engendering an atmosphere of full transparency and mutual understanding between the Government and the MNLF;
Third, confidence-building is interdependent to the other components of the GPH-MNLF Peace Process, namely the socio-economic, security, and community healing and reconciliation components;
Fourth, the Government and the MNLF should mutually reciprocate their actions that are built on trust and sincerity in order to establish and fortify their confidence-building towards a genuine and lasting peace; and
Fifth, confidence-building should be inclusive, i.e., it must not only address and respond to the issues and concerns of the MNLF combatants and the security sector, but also those of the vulnerable sectors, including the women, youth, senior citizens, and persons with disabilities (PWDs) in the communities, internally displaced persons (IDPs), and persons deprived of liberty (PDLs).
Based on the foregoing consensus points, the Confidence-Building Subcommittee identified the key objectives of the confidence building measures to be implemented by the body, to wit:
First, to eliminate and or reduce the reservation and doubts of both parties;
Second, to build trust and confidence between and among the stakeholders (GPH, MNLF, and communities);
Third, to allow the beneficiaries to live a peaceful, productive, and progressive life;
Fourth, trust and sincerity must come from both MNLF and the GPH for genuine and lasting peace; and
Fifth, actions should be reciprocated between the MNLF and the GPH.
The Confidence-Building Subcommittee also discussed, reviewed, and approved the key objectives of confidence-building for FY 2022 to FY 2025, including the proposed major activities that will be implemented in FY 2022.
Aside from MNLF Coordinating Committee Chair Cutan and MNLF Confidence-Building Subcommittee Chair Hassan, the meeting was also attended to and participated by Mr. Abduljjabbar Mamoclo, Deputy Chair of the MNLF Confidence-Building Subcommittee, Mr. Dong Anayatin, MNLF Coordinating Committee Head Secretariat, and ​​MNLF members Datu Halun Amilhussin and Mr. Jhovel Abdurahman. ###
By Office of Presidential Adviser on the Peace Process|2022-03-28T22:10:20+08:00March 28th, 2022|MNLF, News|0 Comments