PALAWAN (10 December 2021) — The National Task Force for the Disbandment of Private Armed Groups (NTF-DPAGs) has successfully disbanded 14 PAGs operating in the Bangsamoro Autonomous Region in Muslim Mindanao (BARMM) and Region 12, exceeding its initial target of five PAGs for this year.

Interior and Local Government Secretary, Eduardo Año, NTF-DPAGs chairman, said that exceeding its target this year by more than 100% can be attributed to the whole-of-government, whole-of-nation approach adopted by the group in combating PAGs.

“By synergizing as one government, we were able to exceed our normalization target for 2021…Trust that the Department of the Interior and Local Government is fully on board in this whole-of-nation battle to dismantle PAGs not just in the south, but also in the rest of the archipelago,” said Año during the NTF-DPAGs’ year-end assessment held from December 8 to 11. 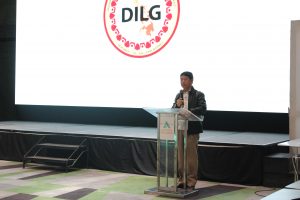 Gearing up for a stronger campaign against PAGs in 2022

During its year-end assessment, members of the NTF-DPAGs team crafted their work plan for 2022 that will be implemented across the BARMM and in Regions 9 to 12.

The plan includes action points on enhancing policy and capacity development, strategic communications, networking and linkaging, monitoring and evaluation, validation of PAGs, legal efforts, reintegration and rehabilitation, and feedback mechanisms, among others.

In his remarks during the activity, Presidential Peace Adviser and NTF-DPAGs special adviser Secretary Carlito G. Galvez, Jr. underscored that what comes after disbandment of these groups is the most important part of the Normalization process because “this is where the empowerment and transformation of the surrendered PAG members will begin.”

Galvez also highlighted the need for the group to intensify its operations especially that tensions related to the upcoming May 2022 elections are starting to brew in communities.

“What is crucial at this point is to sustain the gains we have achieved over the past year and disband the three remaining PAGs we have identified. We cannot allow these lawless groups to sow fear, mistrust and violence among our people. The NTF-DPAGs must therefore be more vigilant and ensure that next year’s political exercise will be safe, peaceful and orderly,” Galvez said. 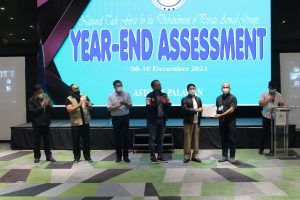 The peace adviser also proposed the creation of the NTF-DPAGs Coordinating Committee which was approved by Chair Año. The said committee will serve as a coordination mechanism to integrate and synchronize the different critical tasks to be undertaken by the Task Force, the AFP, PNP, the LGUs and the BARMM government.

Año also highlighted the importance of the role of the security sector and the Task Force in ensuring the safety of communities, as well as the observance of honest, credible national and local polls.

“Given the rising tensions among rival clans because of the upcoming polls, we must prevent political families from raising or remobilizing their own private armies. By doing so, we protect Filipino communities from the trauma of witnessing or becoming victims of election-related violence or intimidation,” Año said as part of his strategic direction for the Task Force members and secretariat.

“As early as possible, we must cripple the active PAGs and suppress the tendency of potential PAGs to surface…So with all of us working in synchrony for peace and harmony, we will surely unshackle Filipino communities from the evils of private armed groups. Nawa’y sa ating sama-samang lakas ay makamit na rin natin ang inaasam-asam na pangmatagalang kapayapaan at kaunlaran sa bansa,” the NTF-DPAGs chairman said.

Also discussed during the meeting were results of the monitoring and evaluation tools used by member agencies which include the DILG, the Office of the Presidential Adviser on the Peace Process (OPAPP), Task Force Western Mindanao, Task Force Eastern Mindanao, and NTF DPAGs’ NTG Investigation and Legal Offensive, NTG StratCom, NTF Intelligence, NTG Operations.

The results of the assessment were incorporated into NTF-DPAGs’ work plan for next year. ###