This was among the highlights of Philippine National Police (PNP) Police Chief General Guillermo Lorenzo Eleazar’s report on the accomplishments of the National Task Force for the Disbandment of Private Armed Groups (NTF-DPAGs).

According to Eleazar’s report, these private armed groups were composed of 67 members who yielded 64 firearms. Ten members of these surrendered groups were presented during the activity.

“The disbandment of PAGs is a no compromise government commitment to the Bangsamoro people. Let us work together to bring lasting peace and sustainable development here in Mindanao,” he said during a press conference held here on Friday.

Eleazar also warned candidates of next year’s election not to use PAGs in their campaign sorties.

“I am humbly asking for all election candidates, especially those who are running for a position in the local government, to cease from using your goons and guns to intimidate the voters because we will not allow it,” he said. 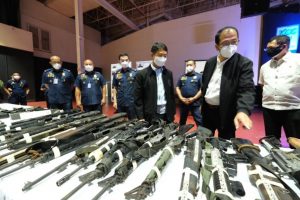 “The whole AFP gives its full support and commitment to ensure that we sustain the success and victory from previous gains in the creation of the NTF-DPAGs,” Faustino said.

He said that stakeholders must continue to work together in order “to realize our shared aspirations of a Bangsamoro that is free from armed groups as well as threat, intimidation and violence.” 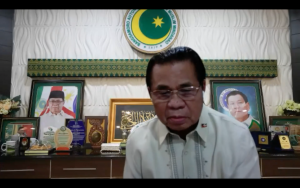 “To truly put peace in place, the Bangsamoro and other regions should put their weapons down and participate in nation-building. By having PAGs roaming around, our people cannot live in peace and trust that Mindanao has departed from its conflict-stricken history,” Ebrahim said.

“I thank our dear partners from the National Task Force for putting this into work. The Moro Islamic Liberation Front, as the leading entity of the interim Bangsamoro Government, will stay true to its word and assist the GPH (government) in all efforts related to the implementation of the Comprehensive Agreement on the Bangsamoro,” he added.

For his part, MNLF Chairman Muslimin Sema recalled how the PAGs can undermine the conduct of elections based on the region’s history.

“PAGs are the primary instruments in the disenfranchisement of the electorate. The MNLF supports by all means the disbandment of PAGs. We have experienced it. It was the PAGs of the 70s who massacred our people which caused the Moros to rise up in arms,” Sema said.

Sema also called on all sectors of society to support the peacekeeping efforts of the task force, saying “This is not a one man job so we must support the NTF on DPAGs.”

Meanwhile, Interior and Local Government Secretary Eduardo Año underscored the crucial mandate of the task force, which is to maintain peace and order as well as protect the democracy in the region.

“At present, we are upfront in realizing the mission of the NTF-DPAGs to gather government instrumentalities to thwart the proliferation of PAGs in the BARMM and its adjacent regions,” Año said. 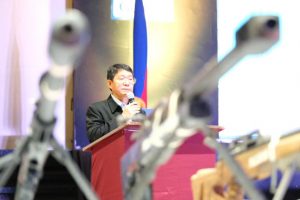 “Our work experiences a lot of challenges but we will not falter in our quest to address threats in the communities and see peace in the Bangsamoro,” he added.

In the meantime, Presidential Peace Adviser Secretary Carlito G. Galvez, Jr., who is also the NTF-DPAGs special adviser, underscored that the gains made by the task force are the result of its whole-of-government approach. 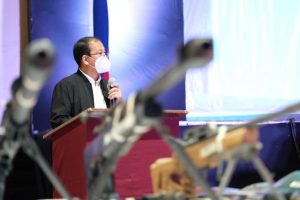 Galvez said the disbandment of PAGs is “an accomplishment achieved through the whole-of-government approach as part of the process of normalization with the Bangsamoro.”

He said the various components of normalization “are being implemented alongside socio-economic development to ensure a holistic approach in giving and sustaining the gains of the peace process.”

This includes the disbandment of private armed groups, the implementation of a program for small arms and light weapons management, the redeployment of AFP personnel, policing, and the clearing of unexploded ordnance (UXO) and landmines.

The NTF-DPAGs has created rehabilitation and reintegration task groups that will focus on implementing programs that will provide support to members of disbanded armed groups so that they will not return to a life of violence. END