“…There is no problem with the passing of this resolution as far as the Senate is concerned. We will fast track the approval of this concurrent resolution in plenary,” said Lacson.

“In fact, after this hearing, I will submit a report in Plenary para ma-discuss and eventually ma-approve even before we go on break after tomorrow,” he added.

The committee hearing was called for by Lacson to deliberate on House Resolutions Nos. 12 to 15 that concur with Proclamations Nos. 1090 to 1093 issued by President Rodrigo Duterte, which grants amnesty to members of rebel groups who have committed crimes in furtherance of their political beliefs.

During the hearing, Presidential Peace Adviser Carlito G. Galvez, Jr. underscored that “the spirit of the amnesty is to provide some compassion to former rebels” and is an integral component of the Comprehensive Peace Process under Executive Order No. 3, series of 2001. 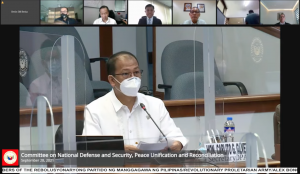 According to Galvez, amnesty is part of the Fourth Path to Peace on “programs for reconciliation, reintegration into mainstream society and rehabilitation,” which aims to  address the legal status and security of former rebels.

“The amnesty proclamations issued by the President are products of peace agreements and of programs of the government to reintegrate former rebels into mainstream society,” he explained.

“The grant of amnesty to these former rebels and combatants will provide them not just a new start in life, but ultimately secure their place in society,” Galvez said, as he appealed to members of the Senate to concur with House Concurrent Resolutions Nos. 12 to 15.

This move, he said, will “realize the meaningful transformation of former rebels and combatants into peaceful and productive citizens of the country.”

Article VII, Section 19 of the 1987 Constitution provides that the President of the Philippines, “has the power to grant amnesty with the concurrence of a majority of all the members of the Congress.”

Galvez recalled that he himself was a recipient of the national government’s amnesty program for former rebel soldiers.

“Had it not been for the national government’s amnesty program, my career as a military officer would have ended in 1989. The amnesty granted to me by former President Fidel Ramos gave me a new lease on life,” he said.

Galvez also pointed out that there is nothing wrong with negotiating with members of rebel or terrorist groups “who have openly expressed their desire to lay down their arms and return to the folds of the law.”

“These rebels must be given the chance to turn a new leaf and return to mainstream society as peaceful and productive individuals. We have seen what happens when these former combatants turn away from armed violence and embrace the path of peace. We are opening our doors for them to start a meaningful transformation,” he said.

Amnesty: Under the Comprehensive Peace Process

Office of the Presidential Adviser on the Peace Process (OPAPP) Assistant Secretary Wilben M. Mayor gave an overview of the peace agreements signed between the Government of the Philippines and non-state armed groups, the amnesty program, the legal basis for the granting of amnesty, and the Amnesty Commission.

Mayor defined amnesty as “that which overlooks and obliterates the offense with which a person is charged such that the person released by Amnesty stands before the law precisely as though he had committed no offense.”

He said that there are about 12,700 prospective applicants for amnesty covering the period 2022 to 2024.

Mayor said this figure is expected to increase once the ongoing survey and validations being conducted by the implementing panels are completed.

On February 5, 2021, the President issued Executive Order No. 125 which created the National Amnesty Commission (NAC) that will be primarily tasked to receive and process applications for amnesty, and determine whether the applicants are entitled to amnesty based on Proclamation Nos. 1090 to 1093.

For his part, Defense Undersecretary Reynaldo B. Mapagu expressed gratitude to the Senate Committee on National Defense and Security, Peace, Unification and Reconciliation for supporting President Duterte’s amnesty proclamations.

“I’d like to express our sincerest thanks to the committee on behalf of Sec. Lorenzana  for supporting this proclamation of the President so that we can give second chances to former members of the [rebel groups],” Mapagu said.

“With your support of the Amnesty Proclamation of the President, we can give them a second chance in life,” he added.

Meanwhile, Lacson also raised the issue of whether a group that has been proscribed as a terrorist organization will still be eligible for amnesty under the said Presidential proclamations.

The senator cited the case of Communist Party of the Philippines-New People’s Army-National Democratic Front (CPP-NPA-NDF) that has a pending proscription case filed by the national government with the Regional Trial Court of Manila.

Lacson also quoted a Department of Justice senior state counsel, who said that “Those who are proscribed for crimes under RA 11479 (Anti-Terrorism Act of 2020) may no longer be eligible for the grant of amnesty.” 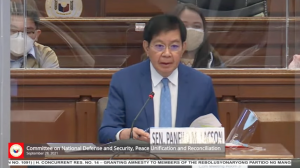 Galvez responded to Lacson by saying that “there are chances that the terrorists can be amnestied for the purpose of harmonizing the peace and reconciliation policy of the government.”

This is the reason, he said, why they are proposing that the NAC chairman has to be a Supreme Court justice “so that he has the certain background on how we can have a liberal interpretation of the law wherein we can really give the spirit of reconciliation and unity with the formal rebels.”

Galvez said that this is also the track being pursued by OPAPP in dealing with the Abu Sayyaf Group which has already been proscribed as a terrorist group.

He said that enticing the top leaders of such terror organizations to return to the folds of the law will have a “crumbling effect,” and convince other members of the group to follow their example.

“OPAPP is really committed to [having] a program for these terrorist groups. There are also valid reasons considering their hardship, the social and political conditions…” he said.

The following crimes are covered by the amnesty proclamations: rebellion or insurrection; conspiracy and proposal to commit rebellion or insurrection; disloyalty of public officers or employees; inciting to rebellion or insurrection; sedition; conspiracy to commit sedition; inciting to sedition; illegal assembly; illegal association; direct assault; indirect assault;  resistance and disobedience to a person in authority or the agents of such person; tumults and other disturbances of public order; unlawful use of means of publication and unlawful utterances; alarms and scandals; illegal possession of firearms, ammunition or explosives; and those charged, detained or convicted of common crimes but who can establish by substantial evidence that they have actually committed said crimes in pursuit of political beliefs.

On the other hand, the amnesty proclamations do not cover the following cases: kidnap for random; massacre; rape; other crimes committed against chastity as defined in the Revised Penal Code as amended; crimes committed for personal ends; violation of Republic Act No. 9165; grave violations of the Geneva Convention of 1949;  and those crimes identified by the United Nations that can never be amnestied.

The granting of amnesty extinguishes any and all criminal liability for the acts subject of the amnesty grant, and restores all civil and political rights suspended or lost by virtue of criminal conviction.

However, amnesty does not remove the grantee’s civil liability for injuries or damages caused to private persons.

“President Duterte’s amnesty proclamations are a testament of his commitment and sincerity to sustain the gains of peace. And with the support of both houses of Congress, our collective vision of bringing a just and lasting peace to all Filipinos is within reach,” Galvez said. ###