SENATE OF THE PHILIPPINES (15 September 2021) — Presidential Peace Adviser Secretary Carlito G. Galvez, Jr. clarified that the PhP 1 million earmarked for each of the decommissioned Moro Islamic Liberation Front-Bangsamoro Islamic Armed Forces (MILF-BIAF) combatants is the estimated monetary value of the socioeconomic package they are meant to receive.

According to Galvez, this amount consists of PhP 100,000 in immediate cash assistance, together with non-cash benefits such as study grants, skills training, and social protection based on the result of the needs assessment conducted for each of the decommissioned combatants (DCs).

This was the explanation given by the peace adviser during the hearing called for by the Senate’s Committee on Finance, Sub-Committee “C” on Wednesday, September 15, to discuss the proposed 2022 budget of the Office of the Presidential Adviser on the Peace Process (OPAPP).

“We have no signed agreement on [the provision of PhP1-million per DC]. Ang pinagusapan namin, yung PhP100,000.00 is the initial (cash assistance), then we have continuing [programs] — ‘yung social protection, yung educational program. It (assistance package for combatants) does not say na PhP1-million is to one combatant dahil it includes ‘yung sa community project, Sir,” he said.

The Task Forces for Decommissioned Combatants and their Communities (TFDCC), along with the Department of Social Welfare and Development (DSWD), conduct a needs assessment of the DCs and their families to determine their actual socioeconomic needs which will be the basis for the composition of the socioeconomic packages.

During the hearing, the Senate Committee on Finance approved OPAPP’s proposed budget amounting to PhP 4.7 billion for fiscal year 2022, which will be subject for deliberation in the plenary.

Included in this budget is the PhP 754.6 million budget proposal to accomplish the agency’s deliverables under the normalization track under the GPH-MILF peace process.

“May I respectfully emphasize the need to address and fund the full package of reforms for the GPH-MILF peace process. The security, socioeconomic, confidence building, TJR and all the other encompassing interventions are necessary to fulfill the promise of a comprehensive political settlement,” Galvez stressed. 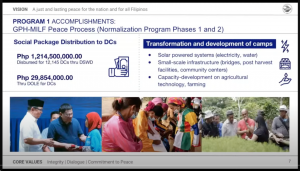 The TFDCC is also conducting values transformation trainings (VTTs) for DCs in partnership with the Nonviolent Peace Force and the Bangsamoro Development Authority (BDA).

The initiative aims to positively transform the former combatants’ attitudes and practices as they prepare to return to their communities. Around 210 of the target 450 DCs scheduled to be trained in 2021 have already completed the VTT. 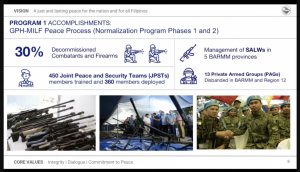 In its budget proposal, “in order to have an impact of the normalization deliverables in 2022”, OPAPP submitted the “barest minimum an additional PhP 754.6 million” to accomplish the following:​ 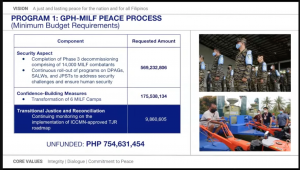 Due to the challenges caused by the COVID-19 pandemic, the timetable for the implementation of OPAPP’s programs, projects and activities under the normalization track was pushed back, specifically due to travel restrictions and the agency’s budget reallocation.

According to Philippine Statistics Authority (PSA) data, the BARMM experienced one of the highest growth rates among all the regions in the country in 2019 and 2020.

Galvez said the approval of OPAPP’s budget of PHP 4.7 billion for 2022 will be critical in moving forward the Philippine’s comprehensive peace process.

“I would like to humbly reiterate to boost the funding of OPAPP’s most critical programs in support of the peace process. While our country faces immense challenges in the form of COVID-19 pandemic, the lives of millions of Filipinos should not be compromised by budgetary concerns,” he said.

The P4.7 billion fund OPAPP requested for is composed of the P 1.9 billion proposed budget under the National Expenditure Program, and P2.8 billion under Unfunded Programs. 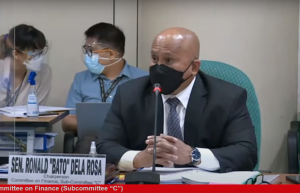 “I would like to congratulate Secretary Galvez of OPAPP for your peace efforts na ginagawa in particular the whole government in general,” Dela Rosa said.

Other legislators who attended the hearing threw their full support behind OPAPP’s mandate of bringing a just and sustainable peace for all Filipinos, emphasizing that the pandemic will not hinder the government’s work for peace.

The Senate-approved OPAPP budget will include an updated timeline on the Bangsamoro peace process, particularly on the Normalization Program for the decommissioned MILF-BIAF combatants. 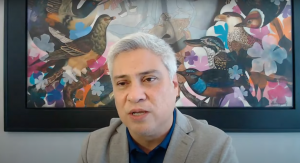 Senator Christopher Lawrence “Bong” Go also expressed his full support for OPAPP’s proposed budget request, saying, “I express my full support for the budget of OPAPP. Mindanao and its people have suffered decades of injustice and social inequity. The government must continuously strive to bring about the much needed reform and development in the Mindanao region.”

Senator Panfilo “Ping” Lacson also underscored the need to fulfill the commitments made by the national government under the normalization program.

“During last year’s budget deliberation of the OPAPP, the original proposal was P8 billion for this current year — this 2021. But NEP instead recommended a miniscule amount of P89.5 million,” Lacson said.

“And since we both realized the seriousness of the commitment made by the government — commitment ‘to eh — so I recommended to the Senate Finance Committee the increase of funding of the program by 3.219 billion,” he added.

It can be recalled that during the September 2020 Senate budget hearing, Lacson also emphasized the need for the normalization program to be given regular funding.

Meanwhile, Senator Francis Tolentino, chairman of the Committee on Local Government, who sponsored Senate Bill No. 2214 which called for the extension of the Bangsamoro Transition Authority (BTA) from 2022 to 2025, said that the Senate will be closely monitoring the implementation of measures based on the updated timeline of the GPH-MILF peace process.

The extension of the Bangsamoro transition period, coupled with the approval of the funding for the normalization process, is expected to allow the Normalization Program to catch-up with the implementation of deliverables under the political track.

“This Committee will be guided accordingly on where to focus because as of now, all the timelines that we are looking at are geared towards the 2022 exit agreement,” Tolentino said. END