TALAINGOD, DAVAO DEL NORTE — It was a dream come true for members of this indigenous people’s tribe who will finally have their own homes, and an emotional occasion for everyone attending the momentous affair.

Presidential Adviser on the Peace Process Carlito G. Galvez, Jr. could not hide his joy when he faced members of the Ata Manobo tribe in this hinterland community on Monday, August 16. 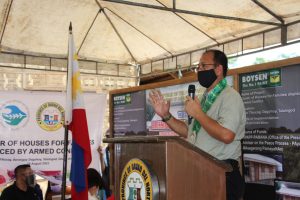 “I am very emotional right now,” he told the crowd of men, women and children gathered in a makeshift tent here to participate in the momentous event.

But what struck a deep chord in Galvez was his conversation with Datu Ginamao Andil, a tribal leader who left the community in the 90s and eventually sought refuge in the Haran, a facility reportedly under the influence of the Communist Terrorist Group (CTG).

Andil, together with other members of the tribe, were convinced by the Provincial Government of Davao del Norte, under the leadership of Governor Edwin Jubahib, to leave the Haran where he stayed for six years and finally return to the village.

“I would like to thank all of those who helped our people. I am thankful that all of us are united. We have heard the assurances from the government,” the tribal elder said in the vernacular.

“We will work closely with Gov. Jubahib so that we can rescue the IPs in Haran. We need to help all Manabos. We want our community to prosper. For everything that has happened, please understand us,” he added. 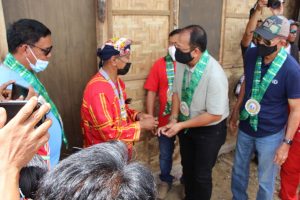 It was a grand homecoming for the old man and a meaningful one for him, as Galvez, Defense Secretary Delfin Lorenzana, and Jubahib led the turnover of 68 housing units to families who were rescued from the Haran.

“We need to help each other. I have seen how our indigenous peoples have been exploited. I promise to help bring peace and reconciliation to our IPs here,” Galvez said.

The Php 11.25 million Bahay Pangkapayapaan was spearheaded by the Provincial Government of Davao del Norte, Office of the Presidential Adviser on the Peace Process (OPAPP), Armed Forces of the Philippines and Philippine National Police.

The idea of establishing the 125-unit housing project began when six families belonging to the tribe were rescued from the Haran in February 2020 after being held in the facility for years by the CTG. 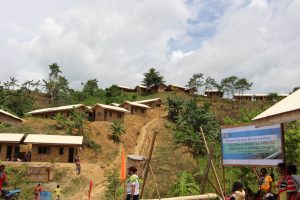 Jubahib pitched the concept of the Peace Village to Galvez, emphasizing the need to provide the IPs who have been displaced by armed conflict with a greater sense of security.

Galvez immediately agreed to the governor’s proposal, as he pledged funds from his agency to support the construction of the village.

In his message, Jubahib said that he was very happy for the tribal members who finally decided to leave the Haran and return to mainstream society.

“You now know that the NPA (New People’s Army), different groups on the other side, and the HARAN are not the solution to the life you dream of having. The real solution is you returning to your lands,” he said in the vernacular.

“This is not the time to fight the government so that you will be listened to, so that your needs will be met. War is not the solution. The real solution is for you to develop your lands,” Jubahib added.

The governor also called on the datus, who are looked up not only as elders but as leaders in the community, to convince members of the tribe not to be influenced by the CTG and to turn away from armed struggle.

For his part, Lorenzana urged members of the tribe not to sell their lands and instead develop their full potential by planting high-value crops such as coffee.

The defense chief pointed out that one of the best ways to address the communist insurgency in the countryside is to build much-needed infrastructure in far-flung, conflict-affected areas.

“If we put roads in these communities, the CTG will go away, as development will start to get in,” Lorenzana said.

In the meantime, Eastern Mindanao Commander (EASTMINCOM) Commander Lt. Gen. Greg Almerol noted that the housing project was built to support the physical, emotional and social well-being of the tribe’s members. 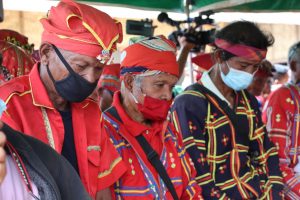 “It is a big win for us to be part of this project spearheaded by OPAPP so that residents no longer have to worry about the threat of the CTG,” Almerol said.

“So that support to the group will stop, especially among communities that are being used by the terrorist group, and to help strengthen your communities and bring progress,” he added.

Meanwhile, Galvez underscored among tribal members the importance of cooperation and solidarity in bringing long-lasting peace and sustainable development to their community.

“There needs to be reconciliation among the people. Our IPs here have to help and love each other in order to avoid conflict. We need to be united in order for us to move forward,” he concluded. ###