CAMP AGUINALDO, QUEZON CITY — Over the past five years, the Duterte Administration has been relentless in pushing forward the comprehensive Philippine peace process and realizing the commitments made by the national government under all signed peace agreements.

This was emphasized by Presidential Peace Adviser Carlito G. Galvez Jr. who reported on the major gains achieved by the government in the peace front during the pre-State of the Nation Address (SONA) Forum participated in by member-agencies of the Security, Justice, and Peace Cabinet Cluster held here on Wednesday, July 21. 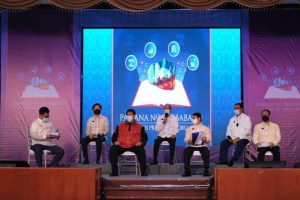 From the highlands of the Cordilleras to the island-provinces of the Bangsamoro region, the government has sustained the gains of peace through a whole-of-society, whole-of-nation approach involving national government agencies, local government units, as well as local and international peace partners.

Bangsamoro: A journey towards self-determination

The implementation of the Political and Normalization tracks of the Comprehensive Agreement on the Bangsamoro (CAB) took a major leap forward under the Duterte Administration.

President Duterte shepherded the passage of Republic Act 11054 or the Bangsamoro Organic Law (BOL), giving birth to the Bangsamoro Autonomous Region in Muslim Mindanao (BARMM) which embodies the dreams and aspirations not only of the Moro People but the entire Filipino nation.

These former fighters are now living as peaceful and productive civilians as their camps are being transformed into progressive and resilient communities.

Each of the decommissioned combatants (DCs) have received transitional cash assistance from the Department of Social Welfare and Development amounting to PHP 100,000.00 and were identified as recipients of the Department of Labor’s Integrated Livelihood and Emergency Employment Program.

The Inter-Cabinet Cluster Mechanism on Normalization (ICCMN) was also created to harmonize the initiatives of national line agencies in the implementation of the Normalization track.

Socioeconomic projects under the Normalization Program include the construction of community-based infrastructure such as irrigation systems spearheaded by the National Irrigation Administration, as well rural health units with birthing facilities funded by the Department of Health and the Bangsamoro government.

Moreover, the Department of Trade and Industry, through its PRAISE program, turned over a P16.5 million Mechanized Solid Waste Segregation System in Butig, Lanao del Sur.

This project aims to create employment and livelihood opportunities for out-of-school youth and DCs.

Meanwhile, 30 units of mobile rice mills were turned over to 1,617 DCs coming from 30 peoples’ organizations and cooperatives.

The collaboration between the national and BARMM governments also got a major boost with the creation of the National Government – Bangsamoro Government Intergovernmental Relations Body (IGRB).

Continuing the commitment to the 1996 Final Peace Agreement

The Peace Coordinating Committees serve as a venue for the Philippine government and the MNLF groups to resolve pressing issues between both parties, cooperate in combating terror groups in the region, as well as implement socio-economic programs in MNLF communities.

The participation and representation of MNLF members in the Bangsamoro Transition Authority (BTA) is another major accomplishment of the Duterte administration.

Ten out of the 80 BTA members are MNLF members. Four members and one senior leader have been elected or appointed to key positions in the Parliament and various ministries.

This development is a testament of the inclusiveness of the BOL, which is now creating opportunities for all residents of the Bangsamoro, regardless of religion, tribe or culture.

With the insincerity shown by the Communist Terrorist Group (CTG) to achieve just and lasting peace in the country, President Duterte terminated national peace talks with the CTG on November 23, 2017.

However, the government did not close its doors on CTG members who wanted to return to the folds of the law.

By virtue of Executive Order No. 70 signed by President Duterte on December 4, 2018, government agencies implemented a “Whole-of-Nation Approach” (WNA) to end the local communist armed conflict.

A National Task Force to End the Local Communist Armed Conflict (NTF-ELCAC) was created, under which Regional Task Forces (RTFs) are mandated to implement peace and development projects on the ground.

Under the WNA are 12 clusters or lines of efforts, among which is Localized Peace Engagement (LPE).

LPE is the Duterte Administration’s answer to the communist armed conflict. By directly engaging former rebels (FRs), their families, and their communities through consultation and dialogue, much-needed government programs and services are delivered to them faster and more efficiently.

The LPE cluster is co-chaired by the Department of the Interior and Local Government (DILG) and the Office of the Presidential Adviser on the Peace Process (OPAPP).

Secretary Galvez was also designated as Cabinet Officer for Regional Development and Security (CORDS) for Region 3.

Under his leadership, all seven provinces in Central Luzon, as well as 14 cities and 116 municipalities declared the CTG as persona non-grata.

Across the nation, thousands of FRs have returned to the folds of the law, through the government’s Task Force Balik Loob (TFBL).

Towards the full transformation of the KAPATIRAN

The historic signing of the Clarificatory Implementing Document (CID) between the Philippine government and the Rebolusyonaryong Partidong Manggagawa ng Pilipinas/ Revolutionary Proletarian Army/ Alex Boncayao Brigade- Tabara Paduano Group (RPM-P/RPA/ABB-TPG), or KAPATIRAN on July 19, 2019 brought the former revolutionary group a step closer in transforming itself into a mainstream socio-economic and political organization.

The CID is an annex to the 2000 peace agreement between the revolutionary group and the Philippine government. It outlines the commitment made by both parties, which could lead to the signing of an exit agreement.

On September 19, 2019, 727 KAPATIRAN members were decommissioned in Jamindan, Capiz, which was witnessed by no less than President Duterte.

Around 266 KAPATIRAN members also completed their Community Defense Unit (CDU) training with the Armed Forces of the Philippines on November 5, 2019, and soon after were deployed to communities.

Aside from receiving immediate cash assistance worth PhP 25,000 each, the decommissioned members were also provided with livelihood projects, skills training seminars, housing projects, and employment opportunities.

Implementing the Sipat in the Cordillera

The Sipat Agreement signed in 1986 with the Cordillera Bodong Administration – Cordillera People’s Liberation Army (CBA-CPLA) put an end to the conflict between the government and former rebel group.

The signing of a Memorandum of Agreement in 2011 further strengthened the peace agreement, which follows a five-year Normalization Plan.

Since the forging of the agreement, the CPLA has been on a journey towards transforming its members into peaceful and productive members of society, and developing the full socio-economic potential of their communities.

On October 23, 2020, 444 firearms owned by CPLA members were inventoried while 353 were turned over to the Police Regional Office – Cordillera and were destroyed at Camp Bado Dangwa in La Trinidad, Benguet.

In terms of socio-economic opportunities, 508 CPLA members and their next-of-kin were employed as forest guards by the Department of Environment and Natural Resources; 932 members and their next of kin were enrolled in the PAyapa at MAsaganang PamayaNAn (PAMANA)-PhilHealth Sponsored Program in 2019; and 72 grantees of the PAMANA-Commission on Higher Education (CHED) Study Grant Program have graduated, while 38 student-recipients continue to receive assistance under the program.

To serve as a joint mechanism between the government and the CBA-CPLA in resolving issues and concerns, the two parties created the Joint Evaluation and Monitoring Committee (JEMC) composed of CBA-CPLA leaders, and representatives from the Armed Forces of the Philippines, Philippine National Police, OPAPP, CAR regional line agencies, and civil society organizations.

Acknowledging that there is a need to address the root causes of armed conflict, OPAPP also created the Social Healing and Peacebuilding (SHAPE) Program that seeks to rebuild the torn social fabric brought by the cycle of armed violence.

Under the SHAPE Program, the National Action Plan on Women, Peace and Security (NAPWPS) is being implemented to ensure that women have an increased role in the decision-making and peacebuilding process.

Aside from empowering women, the SHAPE Program also provides a platform for the youth to actively contribute to the formulation of the National Action Plan on Youth, Peace and Security.

Moreover, the program also gives indigenous peoples and internally displaced persons (IDPs) an opportunity to be agents of peace and development.

All of these interventions are geared towards achieving the government’s goal of building a peaceful and brighter future for the next generation.

The PAMANA for the Filipino people

Meanwhile, the PAyapa at MAsaganang PamayaNAn (PAMANA) Program serves as a testament that in the pursuit of just and lasting peace, strategic socio-economic projects must be carried out in communities affected by armed conflict.

The PAMANA program is anchored on the government’s strategy of winning the peace by forging strategic partnerships in promoting a convergent delivery of goods and services, and addressing regional development challenges in conflict-affected and conflict-vulnerable areas.

It builds both physical and social infrastructure at the regional, provincial and barangay levels to ensure that communities are not left behind in the development process.

The design and delivery of the PAMANA Program is conflict-sensitive and peace-promoting (CSPP), distinguishing it from other development interventions of the government.

Since 2017, the PAMANA Program has allocated almost PHP 18 billion to implement 4,000 projects across the country.

These projects include, among others, the PHP 60 million Bangayan-Zapanta Valley Road project in San Agusan del Norte; the third phase of the PHP 70 million Tagbongabong-Kaularan-San Antonio Farm-to-Market road in San Agusan del Norte; the rehabilitation of the Level III water system level III in Magpet, North Cotabato benefitting 575 households; and post-harvest equipment contributing to the sustainable livelihood and development of farmers in 12 municipalities in Sultan Kudarat.