We must protect our youth against CTG influence — Galvez

CITY OF SAN FERNANDO, PAMPANGA (22 JUNE 2021)— The country’s shift to online learning due to the COVID-19 pandemic has increased the government’s presence in the digital sphere and enabled it to educate and empower the youth against the recruitment and influence of the Communist Terrorist Group (CTG).

This was according to Secretary Carlito G. Galvez, Jr., Presidential Peace Adviser and Cabinet Officer for Regional Development and Security (CORDS) for Central Luzon, during the Region 3 leg of the “Kasama sa Pamana” pre-SONA (State of the Nation Address) series, spearheaded by the Office of the Cabinet Secretary (OCS).

“Expect the CTG to intensify their recruitment online, given that the youth sector is glued to their mobile phones and computer screens,” Galvez said in a recorded message aired during the virtual gathering. 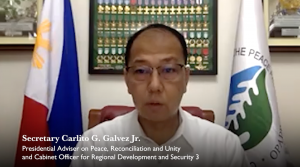 “Our IEC campaign must therefore focus on creating a greater sense of awareness among our youth on the threats being posed by the CTG, and what can be done to effectively counter them,” he added.

Guided by Executive Order No. 70, which provides for a “Whole-of-Nation Approach” to defeat the communist insurgency, regional task forces across the country are implementing peace and development programs to address the root causes of armed conflict.

Undersecretary Ramon Cualoping III, director-general of the Philippine Information Agency (PIA), noted that the implementation of EO No. 70 has brought peace and socio-economic security to communist-affected and communist-threatened barangays.

“The Filipino people deserve food to eat, access to health and social services, livelihood, a safe environment to live in, and a nation where the youth carry hope instead of arms and weapons,” Cualoping said. 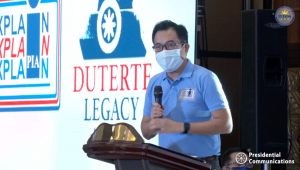 The Central Luzon leg of the regional pre-SONA series is intended to highlight the government’s achievements in Region 3, not only on peace and security, but also in the provision of basic services and infrastructure, as well as its COVID-19 response efforts.Cabinet Secretary Karlo Alexei Nograles lauded the members of regional line agencies and local government units who continue to serve the public despite the unprecedented health crisis. 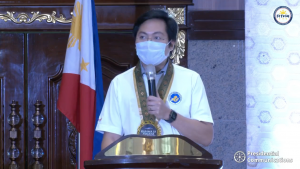 “Itong pang-walo na series na ito, all lead up to the culminating event, which is none other than the sixth and final State of the Nation Address of our beloved President Rodrigo Roa Duterte,” he added.

Central Luzon is considered as an agriculture powerhouse, as it has helped ensure the country’s food security.

“Central Luzon remains to be the top palay and corn producer among the regions. At 699,044 metric tons, the output of the region for this quarter accounted for 15% of the national output, amounting to 4,626,919 metric tons,” Galvez reported.

Meanwhile, Cualoping pointed out that the Duterte administration’s “Plant Plant Plant” program has greatly benefited farmers and consumers alike across the country.

“We are now 90% rice self-sufficient for the first time in so many years. We eat what we harvest, meaning there is now more affordable rice available for the Filipino people,” he said.

Region 3 currently has 5,582 active COVID-19 cases as of June 19, which was a big drop from the 12,000 active cases during the surge in April, according to Dr. Corazon Flores, Department of Health (DOH) regional director for Central Luzon.

“We need to continuously implement this (prevention) in the local government units, in our workplace, in our offices. Huwag po nating kalimutan, kahit nabakunahan na po tayo, ensure that we are practicing the proper hygiene, and enforcing physical distancing, in order to protect the vulnerable,” Flores said.

Flores reported that over 1 million anti-COVID-19 vaccines have been delivered to the region as of June 21, consisting of Sinovac, AstraZeneca, Gamaleya, and Pfizer doses. 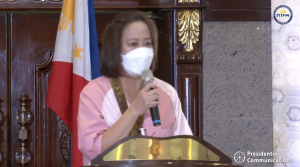 For the second shot, more than 300,000 doses of Sinovac and AstraZeneca have been deployed to the region, with 174,049 individuals vaccinated as of June 20.

Meanwhile, Galvez, who is also the country’s vaccine czar, lauded Central Luzon for its ongoing vaccination rollout, saying this will help the national government in realizing its goal of achieving herd immunity by year-end.

“Region 3 is adjacent to Metro Manila, with Bulacan and Pampanga among our identified centers of gravity. I commend our LGUs and regional line agencies in Central Luzon for your unified efforts to protect the population against the deadly COVID-19 disease,” he said.

“All of these efforts will soon bear fruit. It is our goal to bring a greater sense of normalcy among our people and ultimately, achieve health security for the country,” Galvez added. ###