NAIA TERMINAL 3, PASAY CITY – With the arrival of 15,000 doses of Sputnik V on Saturday, May 1, the Philippines now has three brands in its vaccine supply inventory, as it fast tracks the implementation of the national immunization program.

Gamaleya’s Sputnik V is the second government-procured vaccine that was delivered to the country following Sinovac’s CoronaVac vaccines.

According to National Task Force against COVID 19 Chief Implementer and vaccine czar Secretary Carlito Galvez Jr, the country has secured a total of 10 million doses with the Russian vaccine maker wherein the contract is expandable to about 20 million doses.

Galvez said the first 10 million doses will be delivered to the country in tranches within a four-month period. 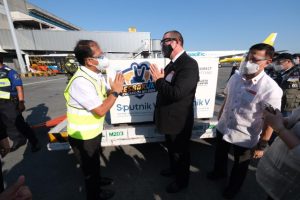 “Despite the shortage in global supply and the great demand for anti-covid vaccines, the Russian government is committed to deliver vaccines for our country and help contain the ongoing surge in the national capital region,” Galvez said.

The vaccine czar attributed the successful negotiations with Gamaleya Research Institute, the manufacturer of Sputnik V, to the country’s “strong bilateral relations” with other nations as well as President Rodrigo Duterte’s independent foreign policy.

Galvez confirmed that 500,000 doses of Sputnik V will be delivered to the country by May. The initial batch of 15,000 doses will be used in a “pilot run” in preparation for the arrival of 485,000 doses this month.

He said the country is expecting the delivery of bigger volumes from Russian Direct Investment Fund (RDIF) with the arrival of two million doses this May and succeeding shipments of four to six million doses in the coming months.

The government began the simultaneous vaccination of priority groups A1, A2, and A3 starting April covering members of the healthcare sector, senior citizens, and persons with comorbidities.

Galvez said that this strategy has simplified the vaccine rollout, as well as boosted the country’s vaccination rate.

Sputnik V’s logistical and storage requirements are more complex as compared to Sinovac and AstraZeneca, which only require 2 to 8 degree centigrade storage temperatures.

According to the information released by the Food and Drug Administration (FDA), Sputnik V vaccines need to be stored at a temperature of negative 18 degrees centigrade and must be kept as a frozen solution.

Galvez said that the 15,000 doses for the pilot run will enable the government to “reassess the country’s logistics capability to handle highly sensitive vaccines.” 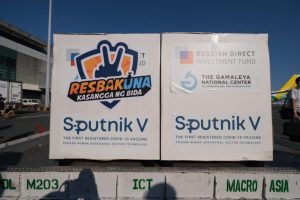 “Through this trial phase for Sputnik V, we will not only improve the logistics component of our vaccine program but also prepare the implementing units in receiving and administering this type of vaccine,” Galvez said.

Last February, the government conducted a simulation exercise for the arrival of highly sensitive vaccines such as those produced by Pfizer-BioNTech.

The vaccine czar earlier confirmed that the initial batches of Sputnik V vaccines will be deployed in the National Capital Region, as well as other economic centers such as Cebu and Davao.

He said that this is due to the sensitive temperature requirement as well as the availability of logistics facilities in the area which can handle the delicate storage needs of the vaccine.

“As the succeeding batches of Sputnik V vaccines arrive in the coming months, we expect that we will be more equipped to roll out the 10 to 20 million doses across the country,” he added.

Asked by the media if the current COVID-19 surge in India will affect the delivery of vaccines from the Serum Institute of India, Galvez said this development will not disrupt the scheduled shipment as the Philippines “has a separate supply chain.”

The country is set to receive 15 to 20 million vaccine doses per month starting August up until December of this year, which if sustained, would enable the country to achieve herd immunity by 2021.

Responding to queries on the efficacy of Sputnik V, IATF Chair and Health Secretary Francisco Duque III gave the assurance that the Russian-made vaccines are safe and effective for use. 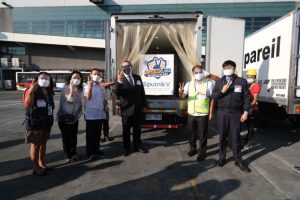 Also witnessing the arrival of the Sputnik V vaccines were Russian Ambassador to the Philippines Marat Pavlo, and Usec. Robert Borje, chief of the Presidential Protocol and Presidential Assistant on Foreign Affairs.