Gov’t to deploy 1 million doses of Sinovac, prioritizes areas with surge in cases

PASAY CITY — With the arrival of another 500,000 doses of Sinovac’s CoronaVac vaccines together with the Certificate of Analysis (COA) of the earlier batch of vaccines delivered, the government has now one million doses ready for deployment across the country.

National Task Force against COVID 19 Chief Implementer and vaccine czar Secretary Carlito Galvez Jr welcomed the latest shipment on Thursday, April 29, as he confirmed that the COA for the 500,000 doses of Sinovac vaccines delivered last April 22 and the latest batch are now with the Philippine Food and Drug Administration (FDA). 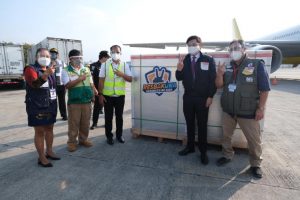 “We are pleased that we have another million doses that are ready for deployment, especially as we are nearing the two million mark for the number of individuals vaccinated,” Galvez said.

The Department of Health (DOH) previously said that a COA is required for all batches of vaccines delivered to ensure that they are safe for distribution and deployment.

For their part, manufacturers are expected to submit a COA for all the batches of vaccines they ship out, which must be checked by the FDA.

Meanwhile, Galvez confirmed that Sinovac will deliver another 1.5 million doses on May 7, which will arrive in one batch.

Galvez also bared the distribution plan for the latest supply of vaccines, in which the priority areas will still be those with high attack rates and are experiencing surges in COVID-19 cases.

The initial 500,000 doses have been allocated for the National Capital Region, as well as selected areas in Regions IVA, III, II, XI, VI, VII, and CAR, wherein spikes in cases have been reported.

Meanwhile, the remaining 500,000 doses will be equitably distributed in regions nationwide to ensure that local government units will be able to continue administering the vaccines to their constituents.

The vaccine czar said that the government is looking at deploying all of the one million doses within one week.

With the logistical challenges being faced by vaccine makers, Galvez said the government is now utilizing local carriers to transport the procured vaccines from their countries of origin to the Philippines, as well as deploying them to implementing units across the country. 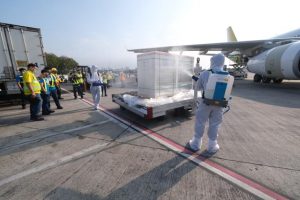 He bared that two of the country’s local carriers – Philippines Airlines and Cebu Pacific – are now bidding for the contract to deliver the vaccines directly from their respective countries of origin to the Philippines. These flights will cover bulk orders of the government.

“[With direct flights] we can assure the stability of the vaccines and our local carriers and airlines are also experts in handling sensitive shipments,” Galvez said. END