PASAY CITY — The arrival of 500,000 doses of Sinovac’s CoronaVac vaccines on Sunday,  April 11, will boost the country’s vaccine rollout as it already breached the 1 million mark in COVID-19 vaccinations over the weekend.

“We are happy to announce that as of 6pm yesterday (April 10), the government has administered a total of 1,137,534 vaccine doses. With the arrival of the additional 500,000 Sinovac vaccines, this will surely help in our effort to vaccinate more Filipino people and put an end to this pandemic”, Secretary Carlito G. Galvez, Jr, National Task Force Against COVID-19 Chief Implementer and Vaccine Czar, said.

According to Galvez, a total of  2.5 million CoronaVac doses have already arrived in the country, of which 1 million were donated by the Chinese government, while the 1 million government-procured doses arrived last March 29. 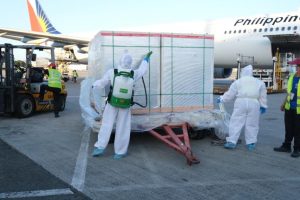 Galvez said an additional 1 million CoronaVac doses are expected to arrive by the end of the month, while another 2 million doses will be shipped to the country in May.

The majority of the newly-arrived 500, 000 doses will be sent to areas in the Visayas and Mindanao since a substantial portion of the previous Sinovac’s doses have already been allocated in Metro Manila, and neighboring provinces.

Galvez also bared that the government will conduct a dry run of Russia’s Sputnik V vaccines manufactured by the Gamaleya Research Institute with the expected arrival of an initial 20,000 doses.

“Mayroon tayong mini-rollout for 20,000 doses of Sputnik V kasi ito talaga medyo sensitive ang logistics because it will be in ampoules and not vials,” he said.

Sputnik V will be given in two separate doses: the first dose to be administered contains Adenovirus-26 particles, while the second jab has the Adenovirus-5.

In an earlier interview, Galvez said that the government expects to receive 500,000 Sputnik V vaccine doses by April, bringing to 2 million the number of anti-COVID vaccines the country is set to receive within this month.

“We are thankful that China and Russia have given their commitment of support and we have seen that the only hope that we have right now for the meantime, for this second quarter is that the majority of the  supply will be coming from Russia and China,” he said.

Galvez likewise announced the arrival of around 18 million vaccine doses from Moderna and AstraZeneca in May which were procured by the private sector and are part of the tripartite deals secured with the manufacturers.

“The private sector has procured more or less 18 million and we [expect some of these orders will arrive] this coming May with Moderna and also with AstraZeneca,” he said.

On January 14, the government and private firms signed a similar tripartite deal with AstraZeneca to procure 14.4 million doses from the British manufacturer, which is in addition to the 2.6 million doses purchased by the private sector last November 2020.

“Talagang napaka-challenging sa first and second quarters natin. But I hope with the increasing production of the vaccine, we are very happy to say that by August we will have a landfall of a lot of vaccines,” Galvez said.

He also lauded local government units across the country for their efficient vaccine rollout which has resulted in the inoculation of more than a million Filipinos.

“We are very thankful, we want to congratulate our mayors, our governors, because one-million-miler na tayo,” Galvez said.

“We have already surpassed 1.1 million vaccination and we are very thankful that we have more than 800,000 healthcare workers who have been vaccinated, and also the remaining with those with comorbidities and also with the senior citizens,” he added.

Starting April, the government began the simultaneous vaccination of the A1, A2 and A3 priority sectors in line with its efforts to enable the country to achieve herd immunity and offset the delays in vaccine deliveries.

Currently, the government is focusing its limited vaccine supplies in areas with the highest infection rates which include the NCR Plus Bubble, as well as Region IV-A, Region III, Cebu, Region VI, Region IX and the Davao Region.###