“With the signing of this tripartite agreement, we can say that our bayanihan spirit is truly alive. We would like to express our deepest appreciation to Mr Enrique K Razon, Chairman of ICTSI and representing the private sector, for his incessant support to the national government in our fight against this pandemic,” Secretary Carlito G. Galvez, National Task Force Against COVID-19 chief implementer of and vaccine czar, said. 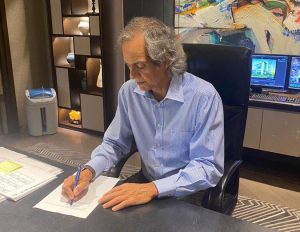 “We would also like to thank Mr Patrick Bergstedt and the whole Moderna Team for keeping up with their commitment in providing 20 million ‘doses of hope’ for 10 million Filipinos.  Our special thanks to the Philippine Ambassador to the United States Jose Manuel ‘Babe’ Romualdez for his continued intercession and introduction of Moderna to the national government,” Galvez added.

Under the agreement, the Philippine government secured 13 million doses of Moderna vaccines, while the private sector ordered another 7 million vaccine doses for its frontline workers.

The negotiations to acquire Moderna vaccines began last year.  The tripartite agreement will provide a major boost to the country’s vaccine program which kicked off last March 1.

As of March 17, 269, 583 medical frontliners and health workers have been inoculated nationwide.

Galvez said that with the signing of the tripartite agreement, the country will be able realize its goal of having a “steady supply of vaccines” throughout the year.

“This is part of our goal to vaccinate 70 million of our adult population and recover the economy from the pandemic,” he said.

In a statement published in ICTSI’s website last February 4, Razon said his company “has formally committed to manage and fund the entire international logistics effort for the Moderna order.”

He said the company has an “intrinsic and moral obligation to assist our countrymen in every way possible.”

“Thank you Mr. Enrique for your kind heart and showing compassion to our people.  This signing will give our economic sector a morale booster and strengthen our fight against COVID-19.  My deepest respect and appreciation to your generosity and kindness,” Galvez added.

Over the past several months, the government has been aggressively negotiating with vaccine makers to secure at least 161-million vaccine doses.