Assalamualaikum Warahmatullahi Wabarakatuh! (Peace be upon you and God’s mercy and blessings)
More than half a century has passed since the forefathers of the Moro struggle founded the Moro National Liberation Front (MNLF) in together with the various sectors of the Ummah, the MNLF pursued the agenda on the right to self-determination and fight the injustices committed against the Bangsamoro people.
And 25 years ago, the Government of the Philippines (GPH) and the MNLF signed the 1996 Final Peace Agreement (FPA), which ushered an era of greater peace, sustainable development and economic stability in Mindanao.
As the MNLF celebrates its 53rd Founding Anniversary, the Office of the Presidential Adviser on the Peace Process affirmed its commitment to the implementation of the remaining commitments to the 1996 Final Peace Agreement. Likewise, we congratulate the men and women of the MNLF for your steadfast commitment to the peace process.
As we celebrate another milestone in the history of the MNLF, we would like to affirm President Rodrigo Roa Duterte and this administration’s pledge to honor all signed peace agreements including that of the 1996 FPA. Various programs for the MNLF are being finalized through the GPH-MNLF Coordinating Committees and are expected to be rolled up in the 2nd quarter of this year in MNLF communities in the Bangsamoro.
With our shared vision of genuine peace and sustainable development in Mindanao, we call on our brothers and sisters in the MNLF to unite and work with us for a better, brighter and more peaceful future of the Moro people.
The Holy Qur’an says in Chapter 49, verse 10: “Humanity is but a single Brotherhood; So make peace with your Brethren.” Truly, the MNLF has been a shining example of what can be achieved by those who walk the path of peace.
Again, Happy 53rd Founding Anniversary to the Moro National Liberation Front!
Mabuhay po kayo! 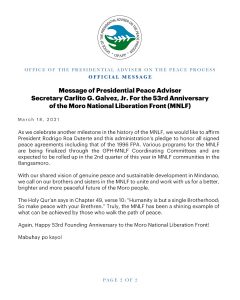