CALAMBA, LAGUNA, (14 November 2020) — The Duterte Administration is confident that it would be able to effectively manage a possible spike in COVID-19 cases resulting from the successive typhoons that have struck the country.

This, as top officials of the National Task Force (NTF) on COVID-19 led the inauguration and ceremonial turn-over here today of a 550-bed mega quarantine facility to Calamba City local officials, just a few days after Typhoon Ulysses made landfall.

“The conversion of this regional government center [aims] to give rise to the health capacity in Calabarzon. As we formally turnover this quarantine facility to Calamba, may this be a signal of our steadfast commitment in our battle against the health crisis,” Año said. 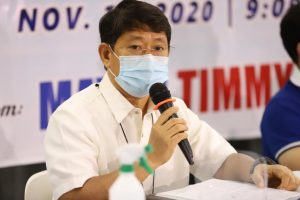 Built by the Department of Public Works and Highways (DPWH) at a cost of Php 50 million, the mega quarantine facility is the largest so far in the country. It aims to serve the needs of positive, mild and asymptomatic patients, as well as health care workers in Calabarzon.

The repurposed quarantine facility was originally the regional government center of Calabarzon. It has complete amenities for patients, as well as a quarters for health care workers and is equipped with CCTV cameras.

The isolation facility will be jointly managed by the Calamba City government, DOH and Office of Civil Defense. The construction of the facility is part of the government’s efforts to address the shortage of hospital beds in the region. 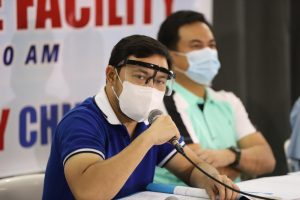 DPWH Secretary Mark Villar, the government’s isolation czar, thanked everyone involved in the conversion of the quarantine facility, emphasizing that the project would not have been completed without the strong support of all stakeholders.

“I’d like to thank all those responsible for the largest facility so far that we have built in the Philippines. You (local government units) have given us help all the time and napakalaki ng sakripisyo ninyo,” he said.

For his part, NTF COVID-19 Chief Implementer Carlito Galvez Jr. commended the DPWH for completing the construction of the facility in such a short period, noting that this a manifestation of the agency’s commitment to help boost the isolation capacity of LGUs. 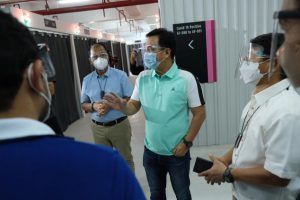 Calamba Mayor Justin Marc “Timmy” Chipeco thanked the national government for helping scale up the region’s health capacity, despite the challenges brought about by the typhoons.

“May isa tayong pahayag. May isa tayong layunin. Ang pinaka-maganda ay magtulungan lahat. And with the help of the national government, we really appreciate this. Thank you for providing your assistance,” he added.

As victims grapple with the impact of the typhoon and start rebuilding their lives, Año called for resilience among the Filipino people.

“But just like every Filipino, with resiliency in our hearts, kahit ano pang pagsubok, kaya natin ‘yan. We will always prevail,” he said.

Galvez Jr also warned of a possible rise in coronavirus cases, though he stressed that the government is well-prepared to respond to the situation. 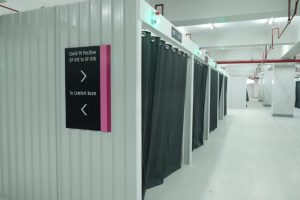 The chief implementer said the government has been able to successfully bring down the number of COVID-19 cases in various parts of the country although there are some areas in Mindanao that are experiencing an uptick in cases.

“The best way to protect ourselves at this time is to observe minimum health standards. Always wear your face masks and face shields, frequently wash your hand and observe social distancing,” he said.

Asked by a member of media on when a COVID-19 vaccine would be available in the country, Galvez said none of the vaccines have so far been approved by the Food and Drug Administration (FDA) of other nations where the clinical trials are being conducted.

Galvez explained that although payment for the vaccines will have to be made in advance to the pharmaceutical companies, describing this arrangement as the “model around the world,” he stressed that what is important is for our country to have equitable access to the vaccine. 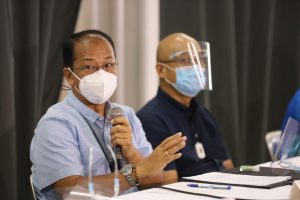 “Pero meron na po tayong gagawin arrangement, [this] can allow us to have access to the vaccine. Kasi ang important naman ‘yung access. It may be advance payment or diplomatic relations with other countries,” he said.

Based on the Philippine National Vaccine Roadmap, the government intends to vaccinate at least 20 percent of the country’s population by next year. To be given priority are the frontliners, the marginalized and vulnerable sectors, and the poorest of the poor.

This is anchored on the Duterte Administration’s goal of providing a safe, effective and affordable vaccine for all Filipinos. A Vaccine Cluster, headed by Galvez, has been created to oversee the evaluation and selection process of the vaccine.

Several modalities are being considered by the government in acquiring the vaccine. These include the WHO-led COVAX facility, government to government negotiations and multi-lateral or “pooled resource” arrangements. ###