MARAWI CITY (17 October 2020 ) — The government led the inauguration of the newly built Dansalan Bato Ali Mosque and rehabilitated Banggolo Bridge here today as the nation commemorated the third anniversary of the liberation of this city from the hands of violent extremists.

“We can see that in the previous months we have been conducting numerous groundbreaking ceremonies. But this time, it is the ribbon cutting for the completion of very important projects,” said Task Force Bangon Marawi (TFBM) Chairman Eduardo Del Rosario.

“President Duterte said that he will see to it that Marawi City will rise as a prosperous city again. That is a promise and commitment of Task Force Bangon Marawi to comply with the instruction of our President,” Del Rosario said. 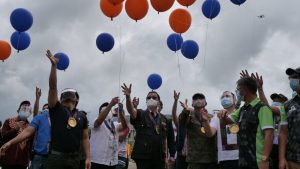 The Bato Mosque served as one of the Maute group’s strongholds and the place where hostages were kept during the five-month siege. However, the mosque was so heavily damaged that it became impossible to rehabilitate it.

The TFBM knew how important the mosque was to the people of the nation’s only Islamic City. The task force then announced in July 2020 that it would take the lead in the reconstruction of the mosque. 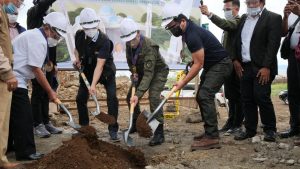 “I am very happy na we can see the most beautiful mosque not only in Marawi City but nationwide. Maipagmamalaki natin na world class ang Bato Mosque ng Marawi City,” he added. 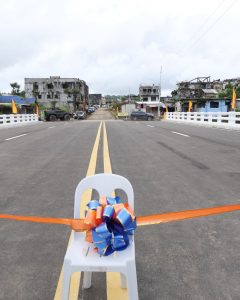 Meanwhile, the Banggolo Bridge became a strategic point of entry to Marawi City during the war. Reclaiming the bridge enabled the military to provide much-needed logistical support to its soldiers such as food, medicine and equipment.

“I remember how the retaking of this bridge allowed the military to transport much-needed supplies to our soldiers and bring in reinforcements. This became a major turning point during the battle and gave us the upper hand,”

“But now, this bridge will serve an entirely different purpose — it will help weave social cohesion and build mutual trust and understanding among residents,” Galvez added.

The former AFP chief of staff served as the Western Mindanao Command chief during the siege and led the Armed Forces of the Philippines (AFP) in the liberation of the city.

A wreath-laying ceremony was also held in honor of the 168 soldiers who perished during the war.

“Today, we pay tribute to the men and women who fought for the liberation of Marawi. Their service and sacrifice is a legacy that will live on forever,” said AFP Chief-of-Staff Gilbert Gapay said.

“It is important that we commemorate this day. It gives us motivation to work hard, to be relentless in our efforts in giving the people of Marawi a better life. This is the only way we can give justice to the sacrifices of those who gave their lives in the name of the service,” Gapay added. 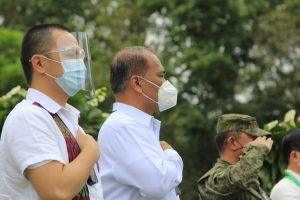 Meanwhile, Marawi City Majul Gandamra thanked the national government for throwing its full support behind the rehabilitation of Marawi.

“To our partners, the line agencies of the government headed by the TFBM, thank you so much for not giving up on us,” Gandamra said.

“Despite the many difficulties that we are experiencing in the implementation of programs to rehabilitate Marawi City and this pandemic, I am grateful that you still provided help and assistance to us,” Gandamra added.

For the past three years, the Office of the Presidential Adviser on the Peace Process (OPAPP), in collaboration with TFBM and other local and international stakeholders, has been carrying out various peacebuilding interventions in Marawi.

These include the Social Healing and Peacebuilding Program (SHAPE) which aims to promote social cohesion and reconciliation among residents while mainstreaming the culture of peace, mutual understanding and solidarity among the people.

During the yearly celebration of National Peace Consciousness Month, OPAPP also spearheads the conduct of Duyog Ramadan in Marawi City and neighboring areas, which provides support to residents who have been affected by the siege.

All of these initiatives aim to break down the walls of fear, anger and distrust, and build bridges of peace, cooperation and hope among the people. ###