Galvez: Health crisis will not prevent government from serving the people

This was underscored by Presidential Peace Adviser Carllito G. Galvez Jr. as he led the groundbreaking ceremony for a Peace Village here that would benefit 125 Ata-Manobo families who had been rescued in the Haran facility and displaced by the armed conflict in the area.

The Php 11.25 million housing project is a collaborative effort between the Office of the Presidential Adviser on the Peace Process (OPAPP), the provincial government of Davao del Norte, the municipal government of Talaingod, Armed Forces of the Philippines and Philippine National Police.

According to Galvez, the housing project is a concrete manifestation of the government’s commitment to help the victims, who for many years, had been exploited by the Communist Party of the Philippines-New Peoples’ Army (CPP-NPA).

“The government is trying to put in its resources to really help the people. Through this project, we would like to bring together those families who have been divided by the Haran,” he said.

The Peace Village was spearheaded by Davao del Norte Governor Edwin Jubahib after six families who had been held hostage by the leftist group associated with CPP-NPA at the Haran, a facility in Davao City run by the United Church of Christ in the Philippines (UCCP), were rescued.

Jubahib then met with Galvez to discuss the plight of the rescued families and others who were still being held at the Haran. The peace adviser then flew to Davao City in February this year to talk to the victims and provide them with livelihood assistance. 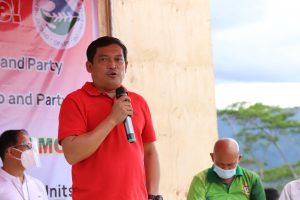 According to Galvez, the communist insurgents have been exploiting the vulnerabilities of the province’s indigenous peoples (IPs) to promote their twisted ideology and undermine the credibility of the government.

“They (CPP-NPA) basically exploited these people (IPs) by sowing conflict in their communities and consequently, forcing them to leave their homes. They were made to believe that the government was responsible for what was happening,” he said.

“The IPs were brainwashed that the military is abusive and the government has done nothing good for them. But the truth is, the government, with the help of the military, has shown utmost sincerity in taking care of them,” Galvez added. 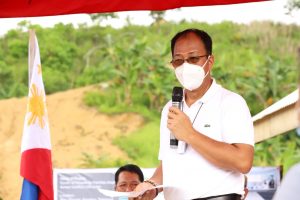 He said the rebel group is exploiting the weaknesses of the people, particularly the IPs’ poor economic conditions, to convince them to pick up arms and go against the government.

“The nation should realize by now how the CPP-NPA is using our Indigenous Peoples to fight the government, and see the cruelty and injustice that these people are being subjected through,” Galvez emphasized.

“The years of detention and exploitation of IPs inside Haran need to stop. That facility has become a breeding ground for individuals who have no other purpose than to sow fear and terror among peace-loving Filipinos,” Galvez stressed.

Jubahib described the Peace Village as a “Bahay Pangkapayapaan,” as it is a concrete indication of President Rodrigo Duterte’s desire to bring genuine peace to communities and uplift the living conditions of the people.

Jubahib said that the soon to be constructed housing units are a “complete package” as they include a bedroom, dining area and a comfort room. Plans are also underway to build a road and a potable water system in the area. 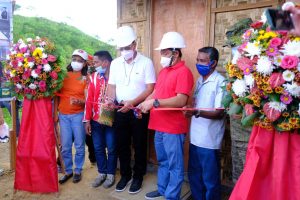 “This is the start of a new chapter for the people of Talaingod who have been affected by armed conflict for years. We are now going to villages not to engage in armed confrontations, but rather to provide homes and livelihood to the people,” he said in the vernacular.

The governor noted that the insurgency problem is largely the result of people’s marginalization from the mainstream of development. These are among the major realizations he had during his visits to remote, hinterland communities in the province.

This is the reason, he said, why the “Whole-of-Nation Approach” by the government in addressing the decades-long armed rebellion in the country is very effective because it addresses the roots of the insurgency.

“Through this housing project, the government would like the people to
feel its concern for the people and its desire to uplift their well-being. More importantly, everyone should help each other so that we can have genuine development,” Jubahib said. 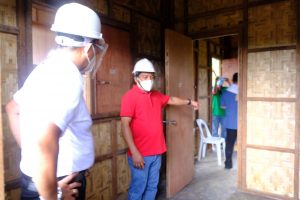 For his part, Maj. Gen. Reuben Basiao, commander of the AFP’s 10th Infantry Division, thanked OPAPP for implementing initiatives that are helping to improve the socio-economic well-being of people in conflict-ridden communities in Mindanao.

“On behalf of the 10th Infantry Division, I am grateful to OPAPP and Sec. Galvez for providing much-needed government services such as this Peace Village to residents in conflict affected and conflict-vulnerable areas in Mindanao and across the country,” Basiao said.

“Through these interventions, OPAPP is not only improving the lives of the people, but at the same time, reinforcing the efforts of the government to collapse or weaken the support system of the communities that are being victimized by these communist-terrorist groups (CTG), he added.

At the same event, Lt. Gen Jose Faustino Jr., commander of the Eastern Mindanao Command (Eastmincom) said the “Bahay Pangkapayapaan” aims to cater to the needs of the IPs coming Haran who had been the subject of alleged exploitation by the CTG and their supporters.

“This will ensure that they will have a good shelter once they go back to their communities. We appreciate the initiative, as it contributes to the whole process of consolidating and developing the area towards a peaceful and sustainable community,” Faustino said.

Meanwhile, Galvez called on the European Union and the United Nations to investigate the Haran Center, which is a prime example of the cruel, unjust and exploitative acts being carried out by the CPP-NPA in order to solicit support from international donors.

Galvez called on the international community to be objective and base their actions on credible sources such as the Philippine security sector which has been closely monitoring developments inside the center. 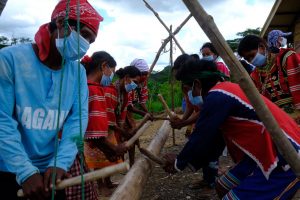 “We believe that the men and women of the EU and UN are composed of level-headed and upstanding individuals who are able to distinguish between pure propaganda and the truth,” he said.

The peace adviser also appealed to the management of Haran to release the Lumad families they have been keeping in the facility for years so that they can finally lead peaceful and productive lives.

“I’m calling on the UCCP, if you are really for God, please set free the families you are holding. God teaches us to love each other. The main reason we are here is to help others and not to harm them and exploit their vulnerabilities,” Galvez said.

“You have to set them free so that they re-unite with their families. Let us unite our brothers who have been divided by this immoral ideology of using armed struggle and violence to achieve their one group’s selfish interests,” he emphasized.

“Let us remember what Albert Einstein said: Peace cannot be achieved by force but by understanding,” Galvez added. 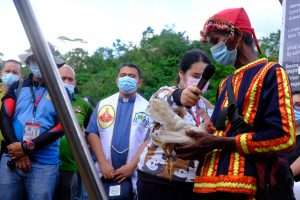 He said this is the reason this years’ peace month celebrations is focused on restoring peace, solidarity and mutual understanding in communities, and most of all, healing broken relationships that have been torn apart by the armed rebellion.

“I would like to urge our brothers and sisters who are still with the NPA to heed the call of the government and abandon armed struggle. There is a better and brighter future waiting for you. But you must take the first step, and that is, to walk the path of peace,” Galvez said.

He said that the Filipino people and the international community should no longer be swayed by the propaganda and lies being peddled by the communist insurgents against the government.

“Is it bad to provide houses for the needy? Is it bad to heal broken relationships? Is it bad to unify all the people of Talaingod and to bring back the peace that was taken from them? These are the questions the rebels must answer. It is now time for you to go home and abandon this futile struggle,” Galvez said.

Early this year, the Regional Peace and Order Council of Region 11 (RPOC-11) approved a resolution seeking the immediate closure of the UCCP Haran Center on F. Selga St. in Davao, after reports surfaced that IPs inside the facility are being exploited by the communist terrorist group as source of new recruits for the movement.

Galvez, who also serves as the chief implementer of the National Task Force against COVID-19, also distributed 500 face masks to residents during the event as part of the government’s prevention measures against the disease. ###