North Cotabato (25 August 2020) – As the government tries to find a balance between ensuring the health of citizens and reviving the nation’s economy amid the COVID-19 pandemic, it continues to carry out its primary mandate: uplifting the lives of the people.

This, as the Office of the Presidential Adviser on the Peace Process (OPAPP) led the turn-over of a PAyapa at MAsaganang PamayaNAn (PAMANA) rehabilitated Level III water system project to the residents of Magpet, North Cotabato. 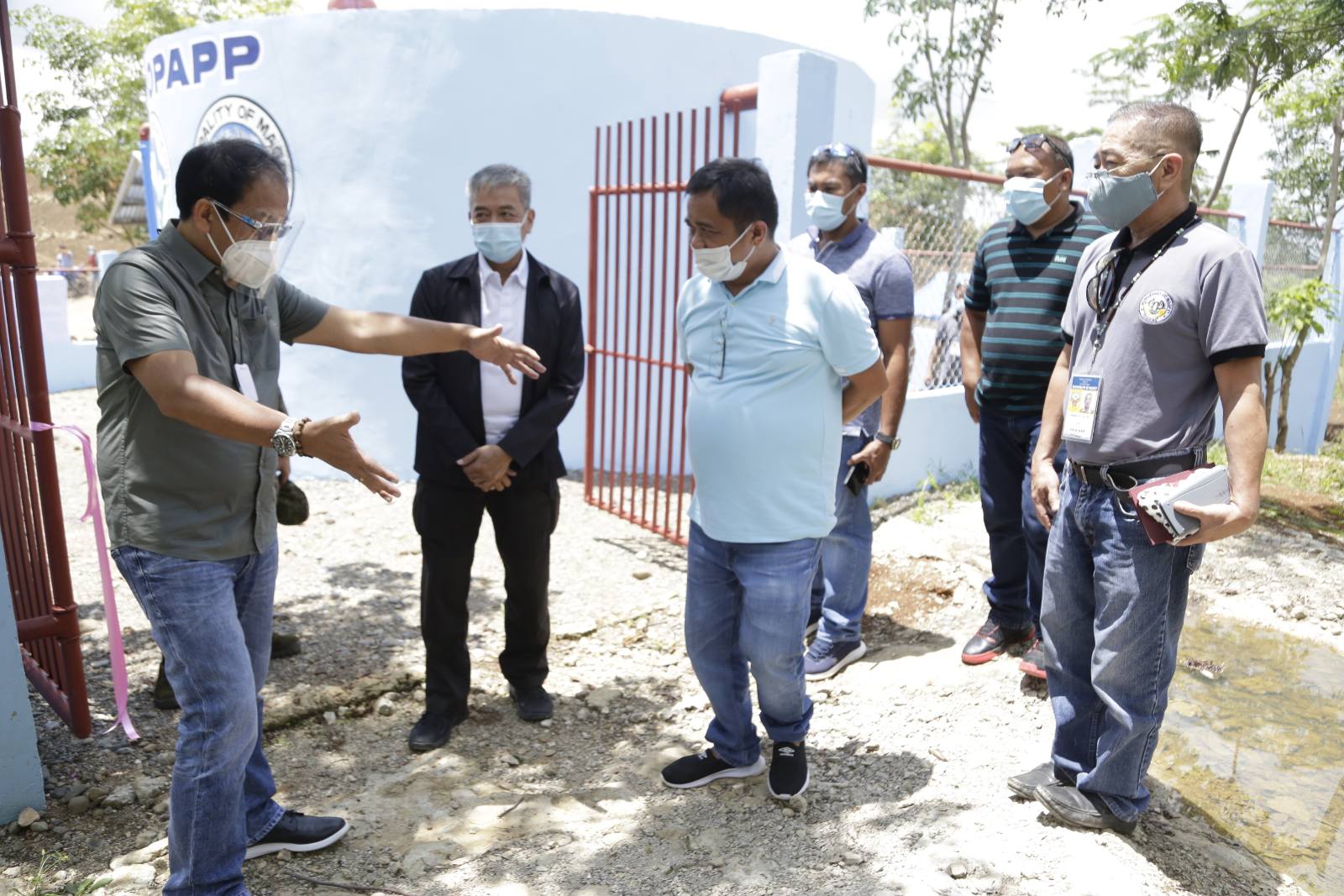 Buhay: Abundant and potable water for all

The water system, built at a total project cost of Php 11.3 million – Php 1.3 million of which was contributed by the Magpet municipal government – now supplies potable drinking water to barangays Mahongcog, Balete and Temporan, whose residents include members of the local indigenous peoples community.

The municipality, once tagged as a “red area” due to the constant attacks perpetrated by members of the New People’s Army (NPA) against government forces, was generally avoided by travelers for fear of being caught in the crossfire.

“Itong part ay tinaguriang “red areas” noong unang panahon. Pero dahil sa interventions ng gobyerno, ng (Philippine) Army at ng kapulisan, hinay-hinay na papunta sa “green” ang ating munisipyo (This part was marked as “red areas” in the past. But because of interventions of the government, of the (Philippine) Army, and the police, our area has gradually turned to a “green” municipality,” Gonzaga added. 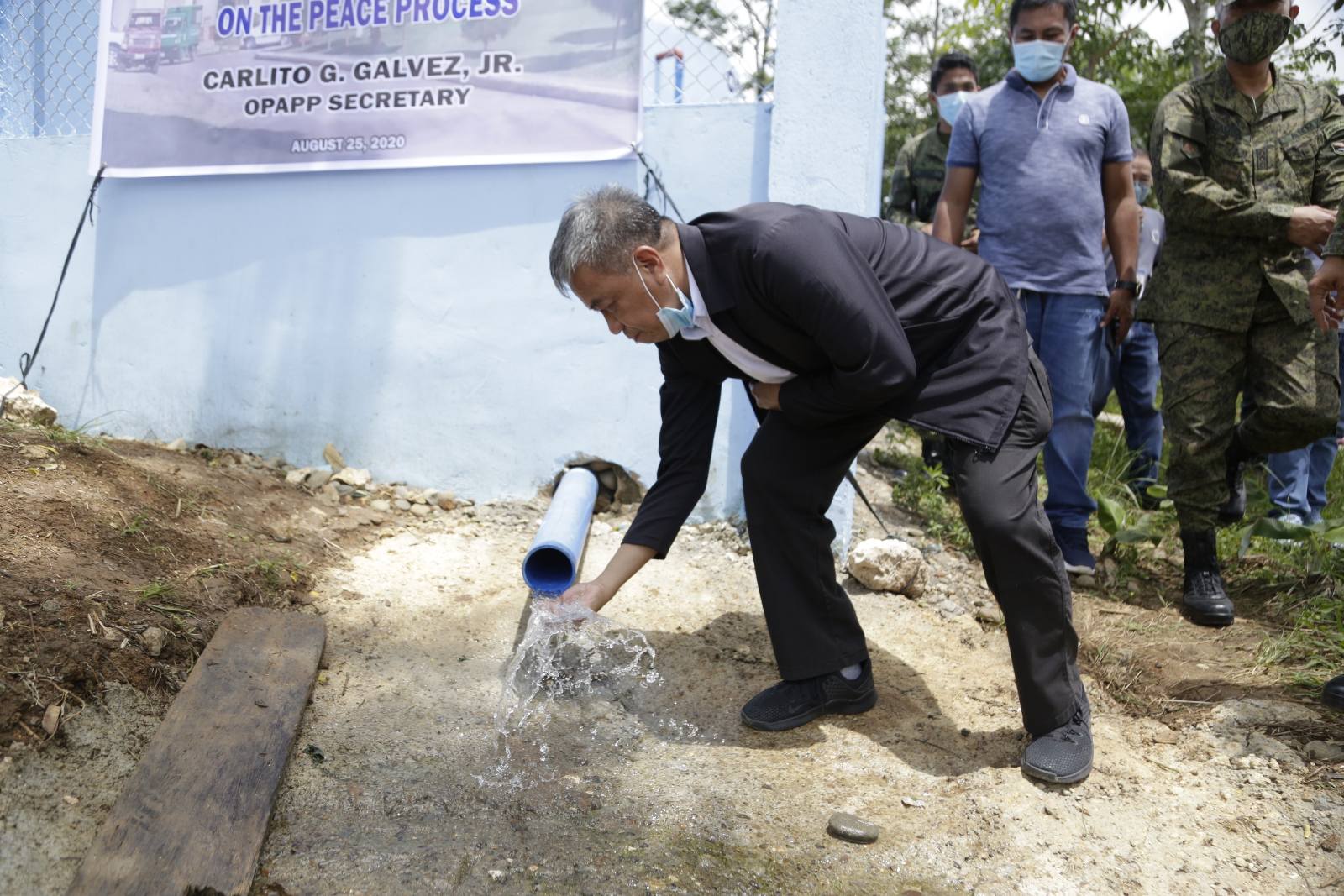 Presidential Peace Adviser Carlito G. Galvez, Jr., who is also the Chief Implementer of the country’s National Action Plan on COVID-19, highlighted the importance of having a source of clean, potable water especially in the midst of a global health crisis.

“Sa ngayon na nagkakaroon tayo ng pandemic, importante ang tubig – water is life. Ang ganitong proyekto po ay para sa kaligtasan at kaayusan ng inyong pamayanan lalo’t ang puso ng ating mahal na Presidente ay nasa mahihirap. Kaya ingatan po ninyo ang inyong mga sarili, we have to survive this pandemic (Now that we are in the midst of a pandemic, water is very important – water is life. A project such as this is for your safety and harmony especially that the heart of our beloved President is for the less fortunate. So take care of yourselves, we have to survive this pandemic),” said Galvez. 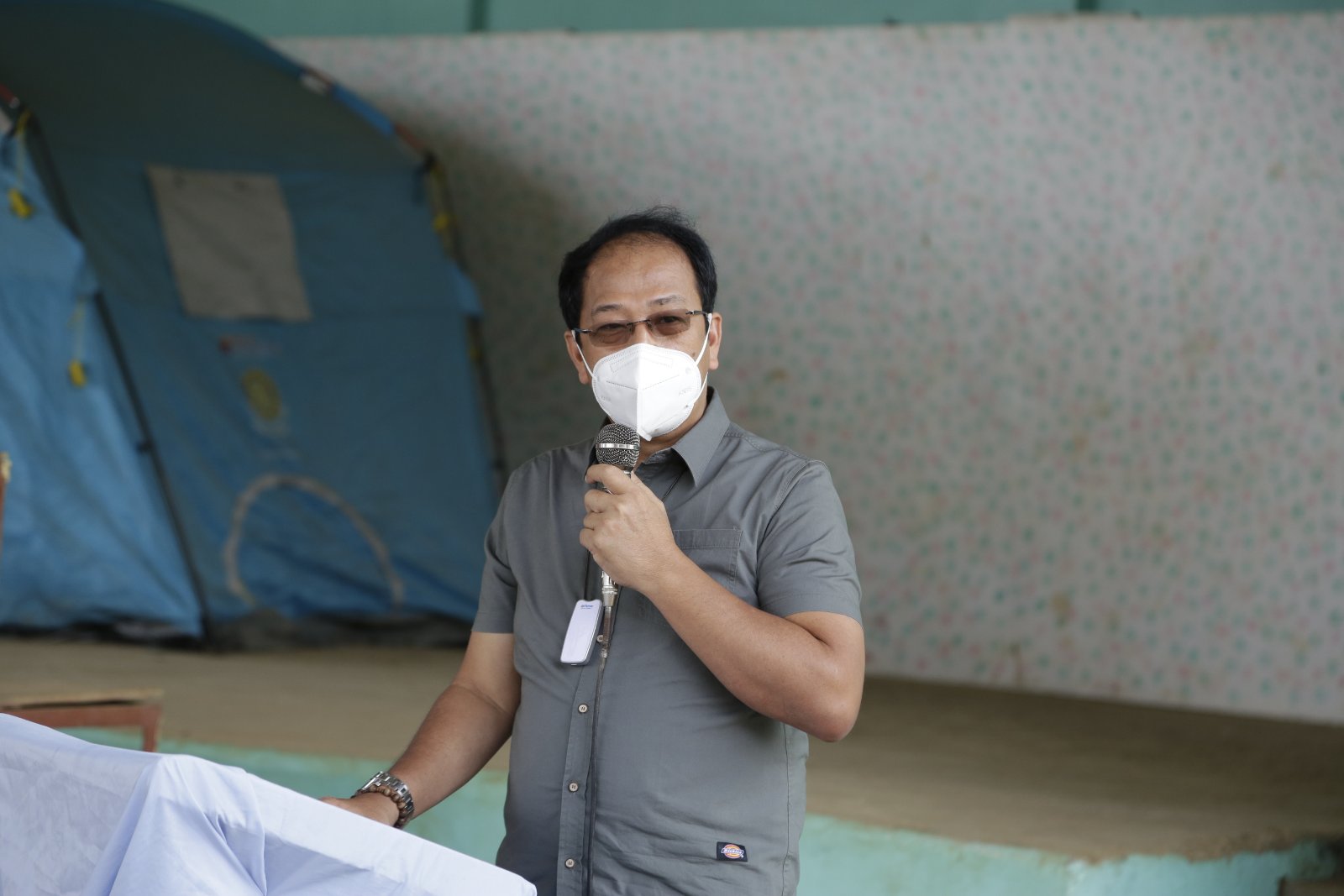 He also reaffirmed his agency’s commitment to continue working with the local government of Magpet to implement much-needed infrastructure projects such as roads, as well provide livelihood assistance such as cattle and other farm inputs.

Aside from providing a financial counterpart to the water system project, the barangay local government unit also donated a piece of land which was used as the spring site and reservoir site, while residents provided the right of way.

Castriciones discussed his agency’s wide array of livelihood programs that could help farmers better develop their now legally-owned lands. These include low interest loans, housing and insurance, among others.

According to him, the distribution of CLOAs, together with the roll-out of these socio-economic interventions, are part of President Rodrigo Duterte’s marching orders to his agency to aid the nation’s farmers. 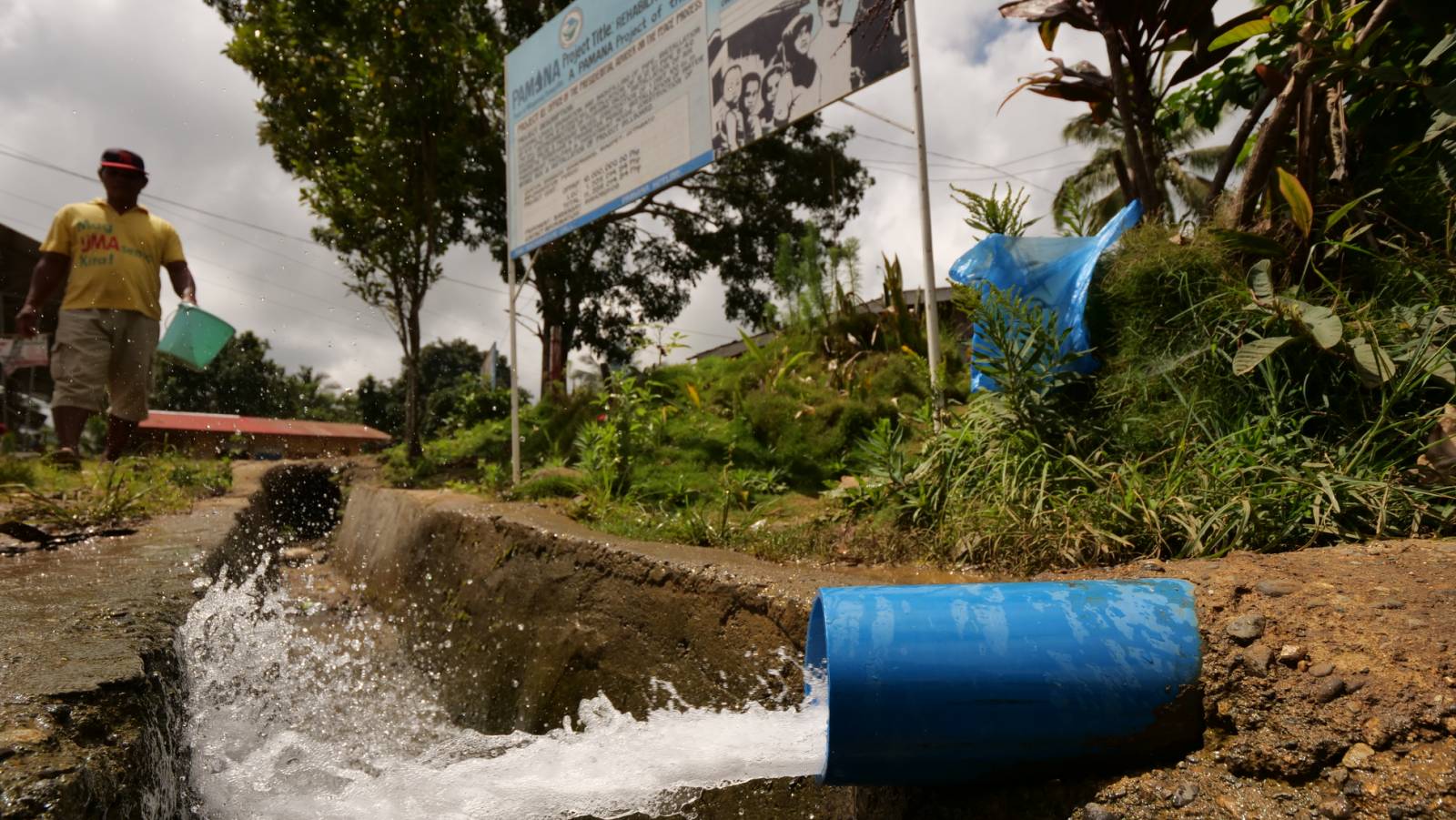 “Nagkakaisa po kami sa gobyerno na gusto naming pataasin ang antas ng pamumuhay ng ating mga magsasaka (we are united in the government in our desire to elevate the living condition of our farmers),” he added.

For his part, Galvez told the ARBs that genuine peace and sustainable development are inseparable and should therefore go hand-in-hand.

According to Galvez, he could easily relate to the plight of farmers because he himself was raised by hard-working farmers. 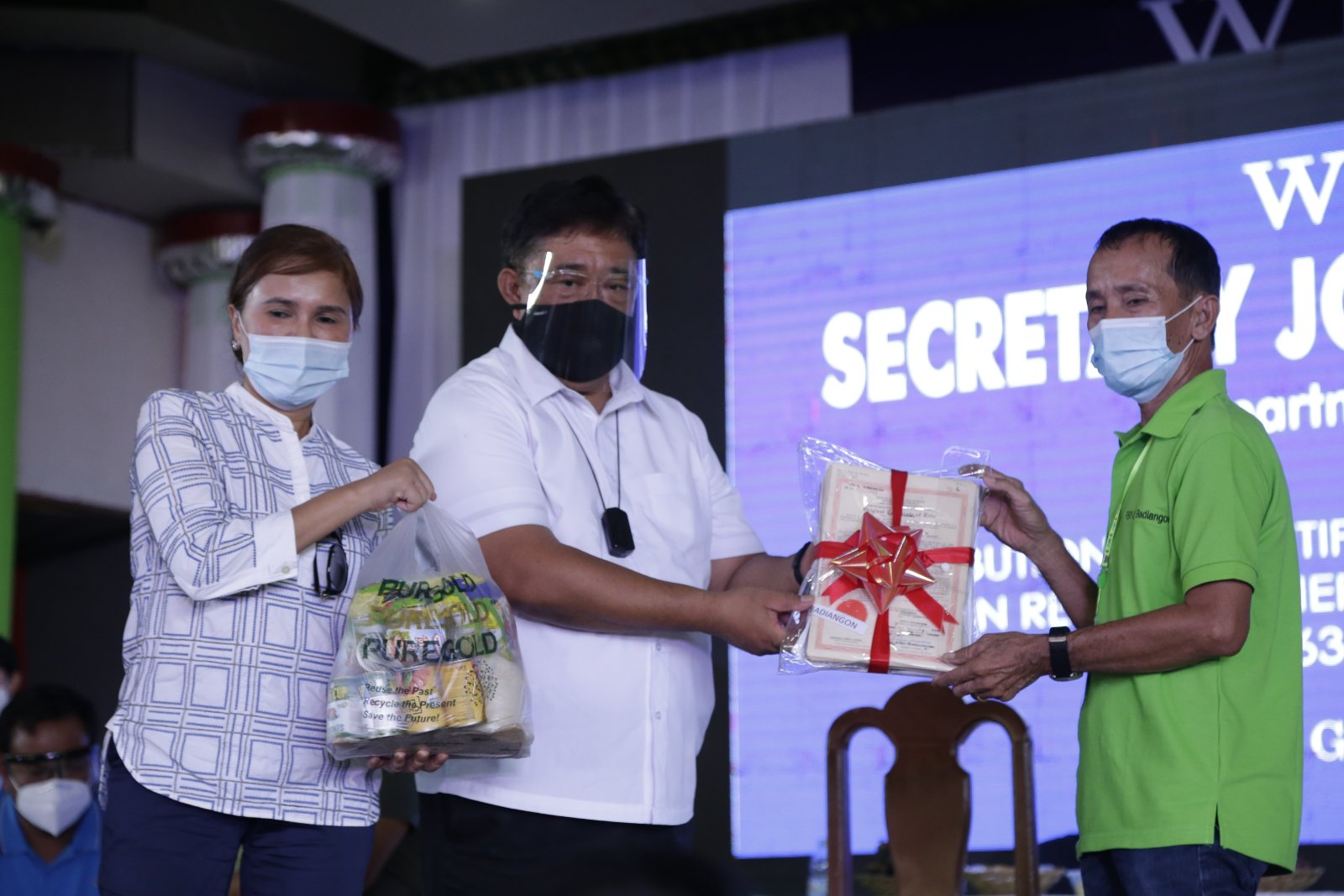 Governor Nancy Catamco also reminded ARBs not to sell their lands but instead plow and plant them with the trees and crops of their preference and the provincial government will assist them and provide them with their needed seedlings among other assistance.

“Sana ‘yung atin pong ginawang mga paghihirap para po maibigay ang mga titulo sa inyo ay pag-ingatan ninyo, ‘wag po ninyong ibenta kasi ang madalas na dahilan ay “kasi nagkasakit po”. Kung nagkasakit ay magtanim po tayo, mamimili lang po kayo kung ano ang gusto ninyong itanim at may programa po ang ating probinsya para tulungan kayo para po kapag may nagkasakit o may pangangailangan sa eskwela ang mga anak ay mayroon kayong makukuha dahil may itinanim po kayo na aanihin (I hope that the hardships we have endured to give you these [land] titles will be taken care of, do not sell them because of  reasons such as “[we sold our lands] because someone sick”. If we get sick, all we have to do is plant, just choose what do you want to plant and our province has a program to help you so that when someone gets sick or has school needs, you have resources to turn to because you have planted something to harvest),”  said Catamco.

Among the ARBs who took part in the event was Tatay Cecilio, 70, whose parents had been farming since the 1950s.  Today, he finally held their family’s land title in his hands.

Tatay Cecilio’s narrative is part of the sad chapter in the history of North Cotabato, which for the longest time became a major recruitment area of various NPA fronts operating in the area.

Basiao told ARBs that the government was able to turn the situation around because some former NPA members are now beneficiaries of the program. Because they have returned to the folds of the government and mainstream society, the area’s peace and order situation has significantly improved.

Aside from the CLOAs, the ARBs also received food packs and surgical masks from the Office of Senator Christopher Lawrence “Bong” Go. The senator, along with President Rodrigo Roa Duterte, gave virtual messages which called on the people not to lose hope amidst the challenges brought about by the global pandemic.

Also present during the activity were officials from the DAR central, regional, and municipal offices, North Cotabato provincial and local government unit officials, and representatives from the Philippine Army and Philippine National Police.