Fr. Chito: A peacebuilder who united faiths and cultures

PASIG CITY (JULY 22, 2020) — “It is with deep sadness that today, the country and the world has lost a peacebuilder in the person of Fr. Chito. He was an epitome of spiritual strength amid chaos. His selfless contribution to peacebuilding in Mindanao, especially in Marawi City and Lanao del Sur, will forever be etched in our hearts.”

This was the message of Presidential Peace Adviser Carlito G. Galvez, Jr. as he paid tribute to Rev. Fr. Teresito “Chito” Larroza Sonagub who passed away on Wednesday.

“Fr. Chito was a man of the people. He spoke the language of peace through peace conversations with people coming from different religious and cultural backgrounds,” Galvez said.

A native of Iloilo, Fr. Chito spent a major part of his religious career preaching in the Islamic City of Marawi City and other areas in Lanao del Norte. 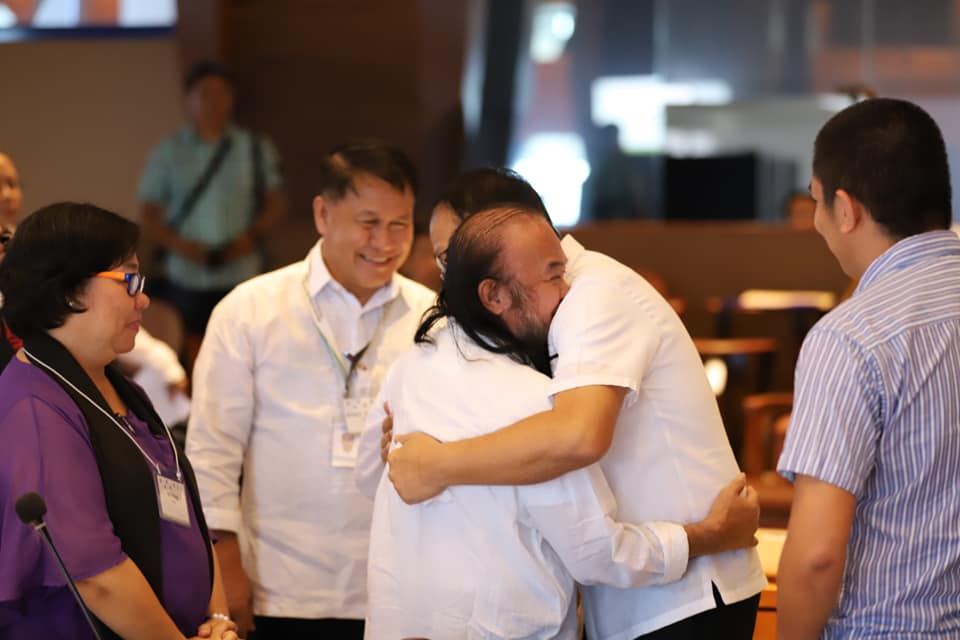 He was one of the pillars of the Pakigdait, Inc., an interfaith, grassroots-based peacebuilding organization that was established in 2001. He had led countless interfaith dialogues which brought together people of different faiths and cultural backgrounds.

A test of faith

What endeared Fr. Chito’s to everyone was his great faith in humanity. He believed that someday, reconciliation and understanding will take root among the people of Mindanao regardless of tribe, culture or religion.

His personal faith, however, was put to the test when he was held hostage by the ISIS-inspired Abu Sayaff and Maute extremist groups when they laid siege to Marawi in 2017.

Fr. Chito was held captive for one hundred and seventeen (117) days, as gun battles erupted and bombs exploded in the city.

During his almost four months of captivity, he was ordered by his captors to do things against his will. He was even asked to build explosive devices.

In an article by the United Religions Initiative, Fr. Chito was quoted as saying, “Because I was a hostage, I would do whatever they would tell me to do. I was no longer afraid to die because I have already considered myself dead psychologically.”

The lowest in his captivity came when he started to question God for the “punishment” he was experiencing. Despite the dire situation he was in, he never lost his faith and consoled himself in the thought that one day, he will be free.

Fr. Chito’s prayers were answered when he, along with one of the hostages, saw an opportunity to regain their freedom.

Galvez, who was then the commander of Western Mindanao Command and led government forces in the battle to liberate Marawi, was among those who welcomed Fr. Chito after his rescue.

Over the years, the two men would develop a friendship that was bound by their common vision: to help bring just and long-lasting peace to Mindanao.

Fr. Chito and Galvez, who was appointed as the Chief of Staff of the Armed Forces of the Philippines, and eventually as the Presidential Peace Adviser, worked side by side when the former was tapped to lead interfaith dialogues and peacebuilding activities in the Bangsamoro organized by the Office of the Presidential Adviser on the Peace Process (OPAPP).

During an Iftar dinner organized by OPAPP in collaboration with Pakigdait Inc. at the Moro Islamic Liberation’s Front’s Camp Bilal in Lanao del Norte on May 2019, Fr. Chito joined his Muslim brothers and sisters in celebrating the Holy Month of Ramadan.

Fr. Chito also became one of the staunchest supporters of the Bangsamoro Organic Law (BOL), believing that its ratification will help bring genuine peace and sustainable development to the Bangsamoro people.

“I am praying for the success of the Bangsamoro Organic Law because everybody is affected whatever the outcome. If this turns out successful, this could mean an end to armed conflict in Mindanao,” he said in an interview with the Philippine News Agency.

(The men and women of OPAPP extend their sincere condolences to the friends and family of Fr. Chito. His remains now lie at his home in Norala, South Cotabato. He will be laid to rest on 3 August 2020). ###