Bayanihan ni Juan: The Filipino Spirit at its Finest

PASIG CITY (April 13 2020) – The indomitable Filipino spirit is known to rise up during the most challenging of times. We have seen this countless times during natural and man-made disasters, calamities and situations of armed conflict.

As COVID-19 continues to spread across the country, this bayanihan spirit is being exemplified by local artists, designers and entrepreneurs who have moved out of their comfort zones so they could give a hand to the nation’s frontliners against the disease.

Weaving threads of hope and resilience

There has been a worldwide shortage of Personal Protective Equipment (PPE) since the outbreak of the viral disease which has taken a heavy toll on the country’s health care sector.

In Cagayan de Oro, a seasoned member of the Mindanao fashion industry is using her shears, measuring tape and fabric to produce Philippine flag-inspired PPEs for the nation’s medical frontliners.

Dubbed the ‘Queen of Mindanaoan Fashion,’ Guela Ampong, is a nurse-turned-designer with 11 years of experience in the fashion business. As a nurse herself, Ampong understands the need to protect the health of frontliners.

When hospitals in Cagayan de Oro asked for donations to purchase PPEs, she teamed up with her good friend obstetrician-gynecologist Dr. Jamillah Watamama to design and produce PPE for the city’s health workers.

The duo organized a fund-raising campaign called ‘Donate 1 PPE and Save a Frontliner’ wherein individuals or groups can donate PhP 500 which is equivalent to the cost of one PPE. 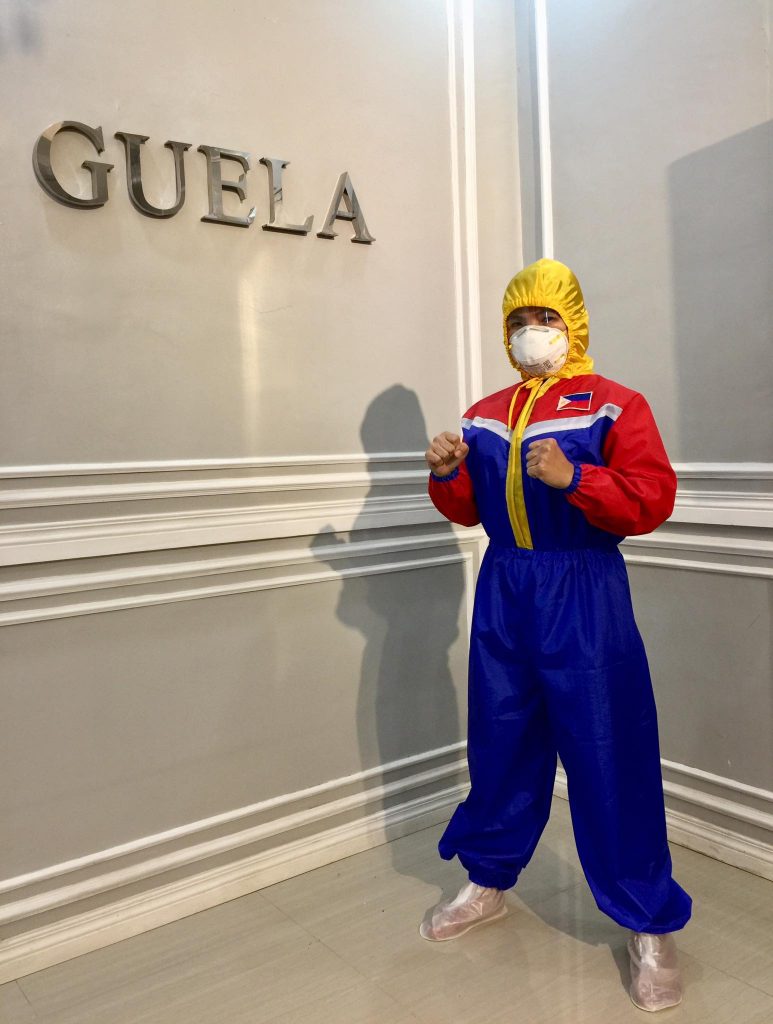 “I was alarmed when I heard the increasing number of deaths of our doctors. While they (doctors) serve our kababayans who are COVID-19 positive, they risk their lives and unknowingly catch the virus due to lack of PPE supplies,” Ampong shared.

“I thought to myself, ‘they (doctors) take care of us, but who will take care of them?’ Since then, I was determined to [use] my fashion house and began manufacturing of PPE suits and hazmats to be distributed to the frontliners of the hotspot hospitals,” she said.

Inspired by Mindanaoan culture and traditions, Guela created the Philippine flag-inspired hazmat “to express gratitude and boost their morale while battling with a common adversary, the SarsCoV2.”

Ampong  explained that each color in the PPE represents a set of virtues: blue for peace, harmony, and unity as Filipinos help one another to survive; red for war against the unseen common enemy; yellow for resilience and hope that this crisis will soon pass; and white for purity, as Filipino’s are pure in heart and are willing to serve their countrymen.

“Let us hold on together, pray to God, and support our national government as this is a crucial moment to stand as one nation. We are survivors of man-made and natural calamities, no one can tremble the Filipino spirit. Pilipinas, we heal as one,” she said.

Ampong intends to continue helping the nation’s frontliners even after the crisis is over by producing hazmats. This will also help seamstresses and tailors who lost their livelihood during the outbreak.

Another Filipino fashion designer who has dedicated his time and expertise to help the country’s frontliners is Cristantine Caparos. He has helped saw more or less 200 PPE gowns, 500 face masks, as well as caps and shoe covers for medical workers.

The Pasig-based Caparos was invited to join a group of volunteer designers from his school, the Fashion Institute of the Philippines. They collected fabrics from donors and  distributed them among designers who transformed them into PPEs.

Due to the Luzon-wide enhanced community quarantine, the group’s members couldn’t move around. They didn’t have an army of sewers so they had to personally make the PPEs themselves in the safety of their own homes. 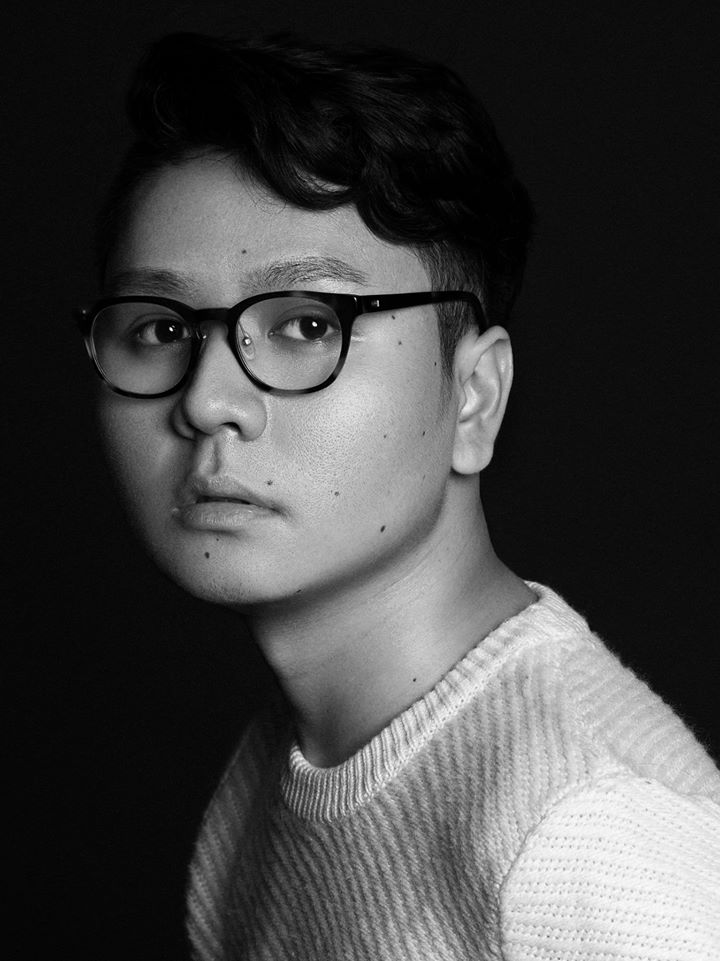 “I guess what makes us Filipinos unique during these trying times is our strong “bayanihan” spirit. It is helping each other out as a community and working together to achieve a particular goal,” Cristantine stressed in an online interview. 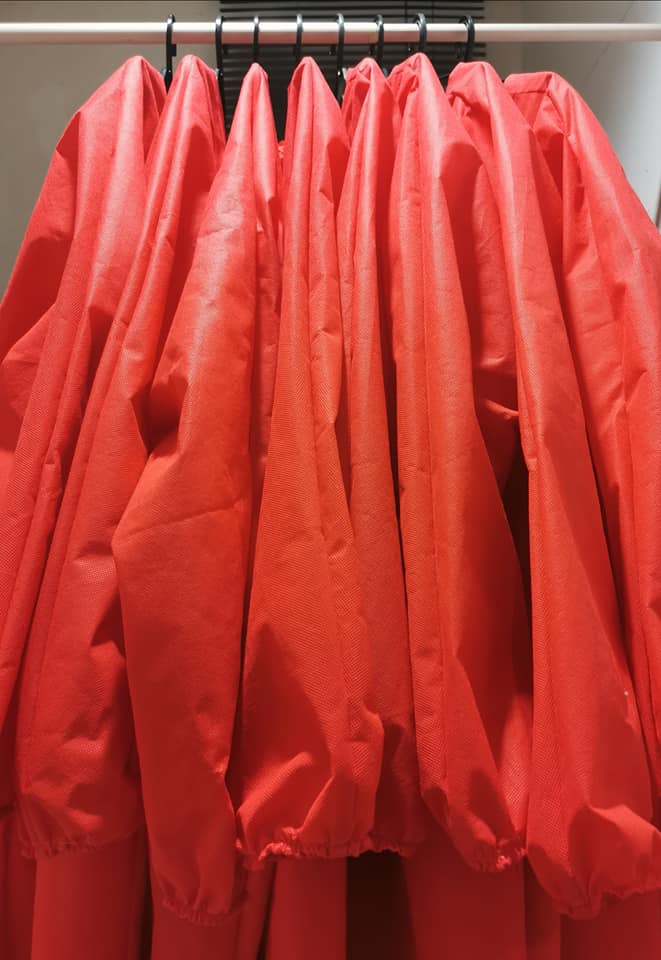 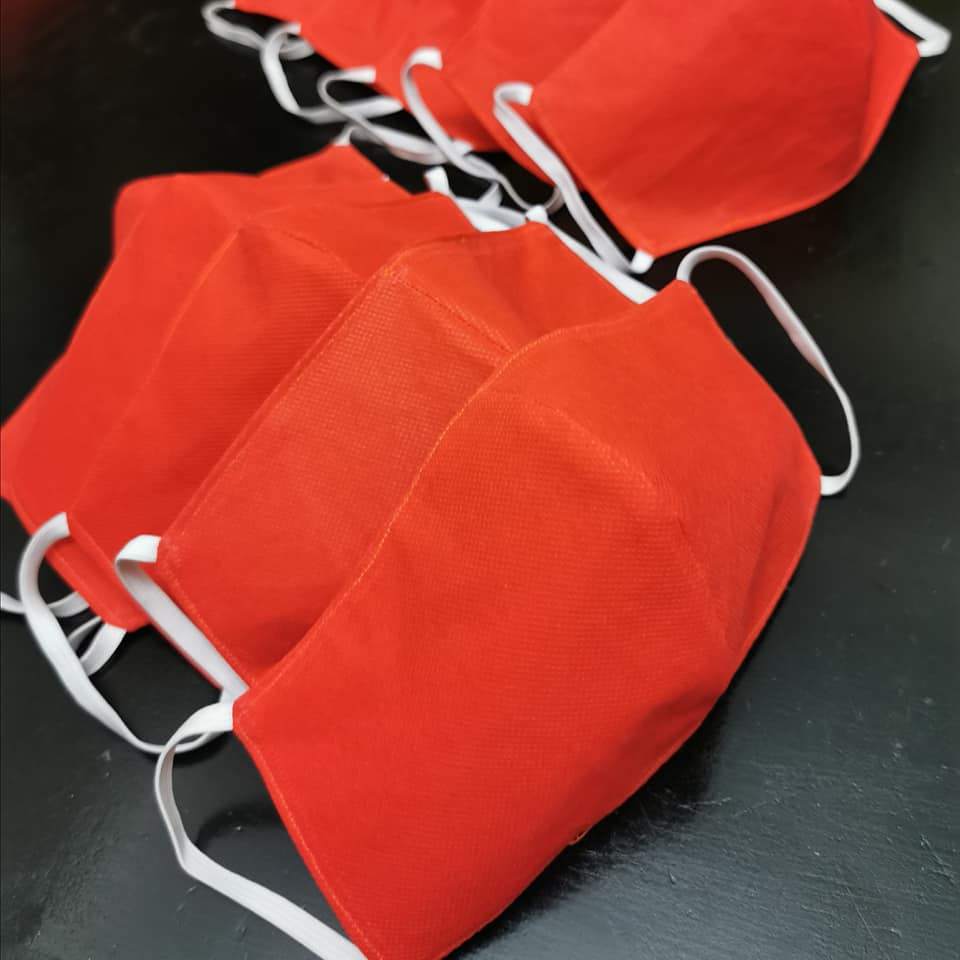 “Every Filipino is doing their part to help overcome this pandemic, whether it’s being a frontliner, staying at home, giving food to those in need, making PPEs, providing suggestions to our government, etc. Everyone in their way, big or small, is trying to help,” he added.

Leading fashion groups and personalities from the northern to southern parts of the country have banded together in the spirit of bayanihan to provide support to the nation’s medical frontliners.

These include the Manila Protective Gear Sewing Club, the Fashion Designers Association of Zamboanga, and countless fashion groups and personalities who are pulling their resources and manpower to produce PPEs. 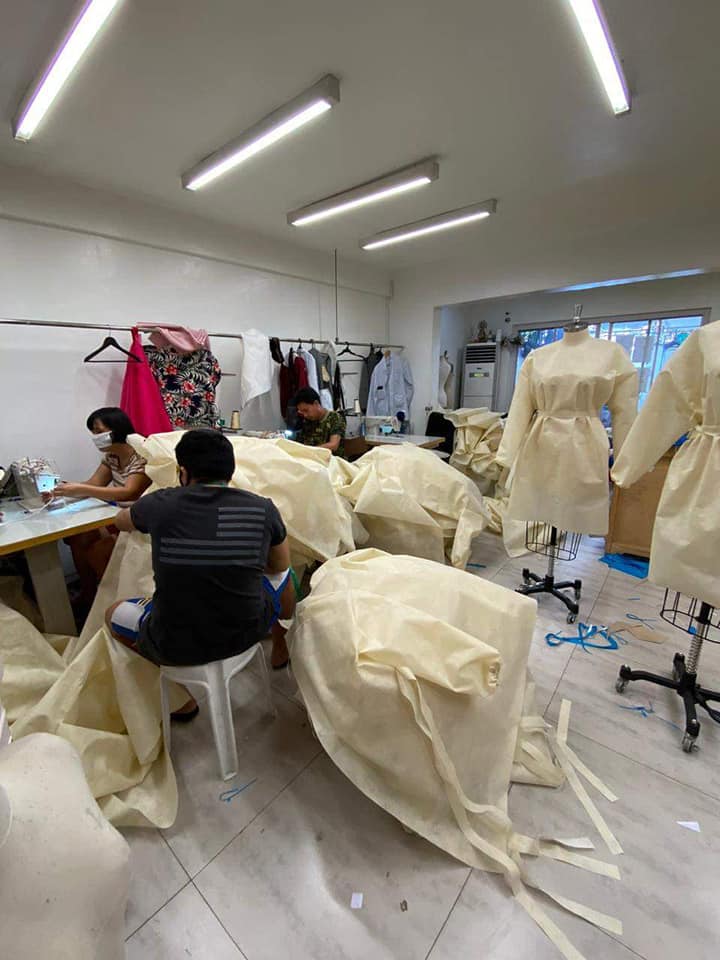 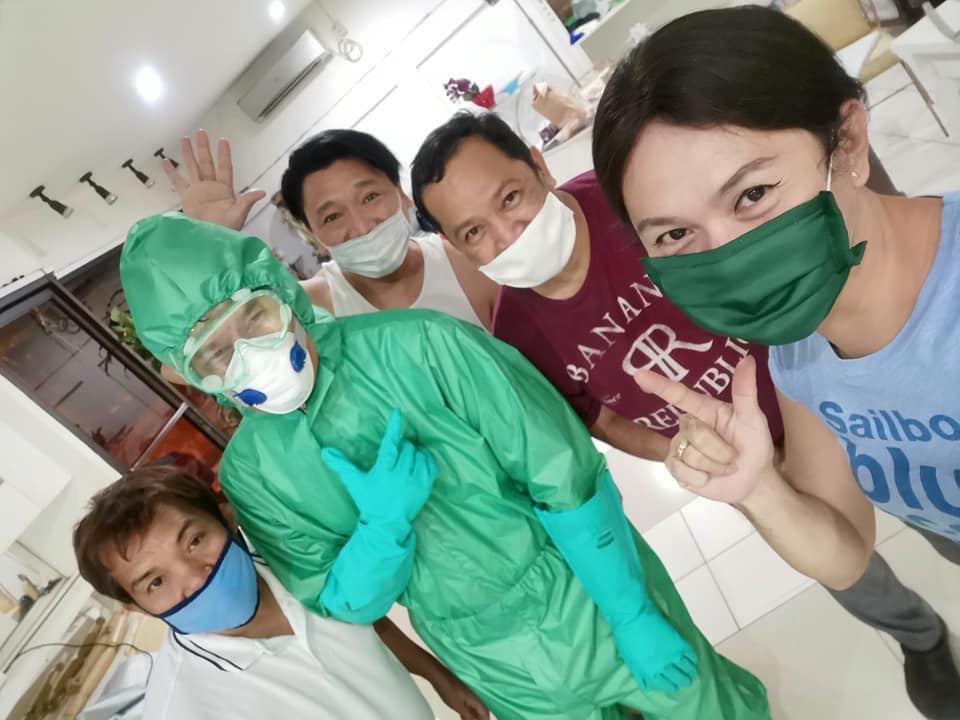 Local businesses rising up to the challenge

Local business establishments and small shop owners across the country are also temporarily setting aside their profit-oriented mindset so they could contribute in the nation’s battle against COVID-19.

Although micro, small and medium-sized enterprises (MSMEs), are among the most affected by the outbreak, they are doing their share to help make the lives of the nation’s frontliners a little more comfortable.

From the highlands of Isulan, Sultan Kudarat, businessman Patrick Ibrahim Mama donated 10-hectares worth of calamansi to the people of Isulan and nearby areas to boost their immune system and as a way of showing his solidarity with his countrymen.

In a video message uploaded in his Facebook account, he said that although he may not be able to contribute financially, he is willing to share whatever blessings he and his family have to others in need.

In Metro Manila, US Navy Veteran Rodney Castillejos helped in the production of more than 500 much-needed aerosol boxes which were distributed to more than 100 hospitals in Luzon, Visayas, and Mindanao. 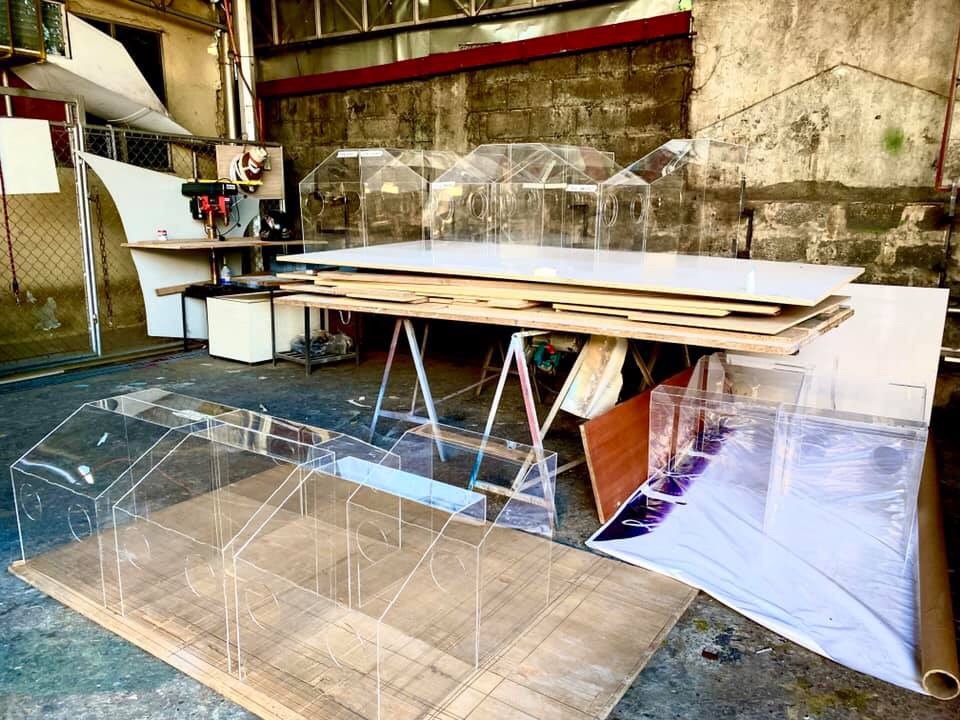 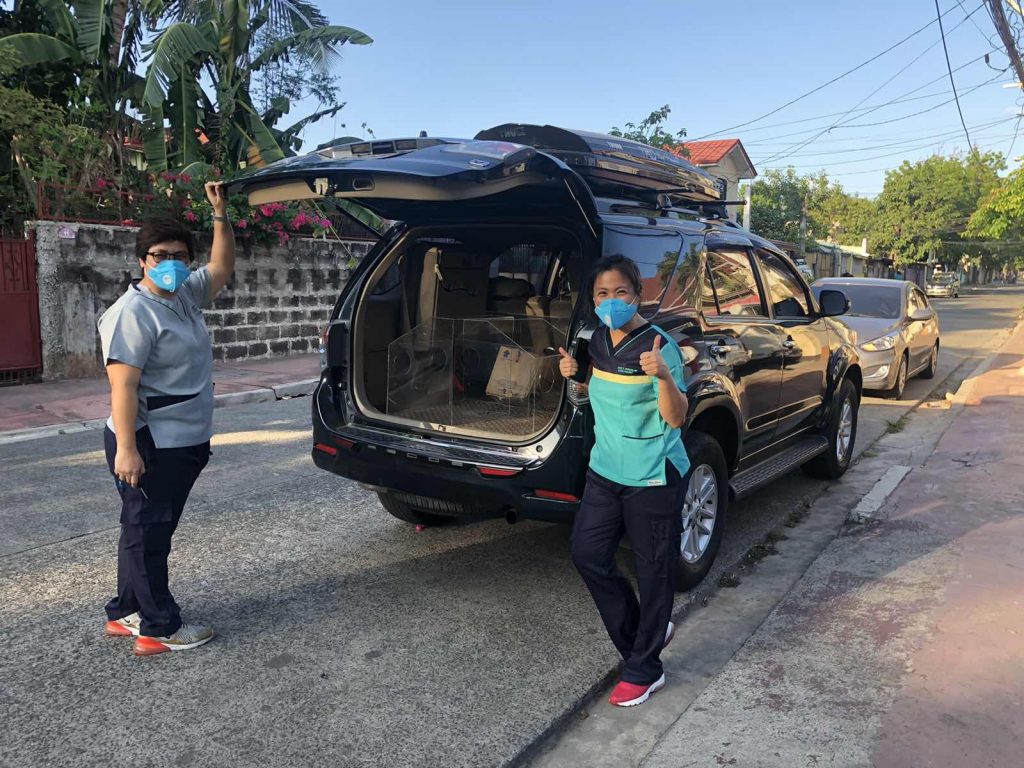 “I did not feel comfortable just to sit down, watch or listen [in] the news and social media. I felt like I should do something to contribute…Filipinos are survivors,” Castillejos shared during an online interview.

“We have to give credit also to our 20 workers who decided to stay at work instead of going home to their provinces. I asked them if they are willing to help, all [of them] are willing,” added Castillejos, emphasizing that these workers should be lauded for their willingness to sacrifice themselves in order to serve their fellow Filipinos.

His involvement in the project started when Gerom Aquino, who works for Motolite, announced on social media that he needed a laser cutter to make the aerosol boxes. Michael Fung, owner of MF Customs provided the design template for the boxes.

Meanwhile, Castillejos’ colleagues from SSHS Batch ‘92 donated raw materials such as acrylics, adhesives, and cash for the productions. Volunteer Cristine Fransciso helped in facilitating the production, as well as handled the administrative aspect of production.

For his part, Marikina Heights Brgy Captain Jeren Feliciano handled the delivery of the aerosol boxes. Castillejos’ cousin, Cindy Castillejos who works with the Asian Development Bank, coordinated the shipment of the devices to Mindanao via C130.

“We have to give support to our small businesses because they also provide for their workers. Also, I am impressed with the kindness and generosity shown by colleagues and perfect strangers in this common cause, in return we worked above and beyond,” he declared.

Castillejos, owner of PBOX Creative Advertising, emphasized the need to acknowledge and pay tribute to the sacrifices, commitment and hard work of all Filipinos who are in the forefront of the nation’s fight against the disease.

And to all the Ampongs, Caparoses, Mamas, and Castillejoses who have set aside profit so they could help the country’s frontliners, they are the epitome of the Filipino people’s bayanihan spirit.