Davao de Oro (February 14, 2020) – The Office of the Presidential Peace Adviser on the Peace Process (OPAPP), together with its partner line agencies, will implement P1.7-billion worth of projects this year which aim to uplift the well-being of people residing in conflict-affected communities throughout the country.

Presidential Peace Adviser Carlito G. Galvez Jr emphasized that fresh funds have been allocated to bring much-needed interventions through the PAyapa at MAsaganang PamayaNAn (PAMANA), a multi-agency program which seeks to address the underlying conditions in communities wracked by armed-conflict in at least seven regions.

“These projects are designed to help last-mile communities that are affected by the problem of insurgency. All projects under the PAMANA Program for 2020 are strategically planned to address the root causes that contribute to the armed conflict in specific areas of these regions,” Galvez said.

“PAMANA has been delivering not only socio-economic interventions to these communities, but also carrying out other peacebuilding initiatives such as social healing and the implementation of conflict-sensitive and peace promoting (CSPP) initiatives for the past nine years,” he added.

Galvez said PAMANA is anchored on the Duterte administration’s Six-Point Peace and Development Agenda, whose vision is to bring enduring peace and sustainable development across the nation.

“Through these projects, the Duterte Administration remains steadfast in its desire to resolve the armed conflict brought about by the communist insurgency by rooting out the underlying factors of the problem,” he noted. 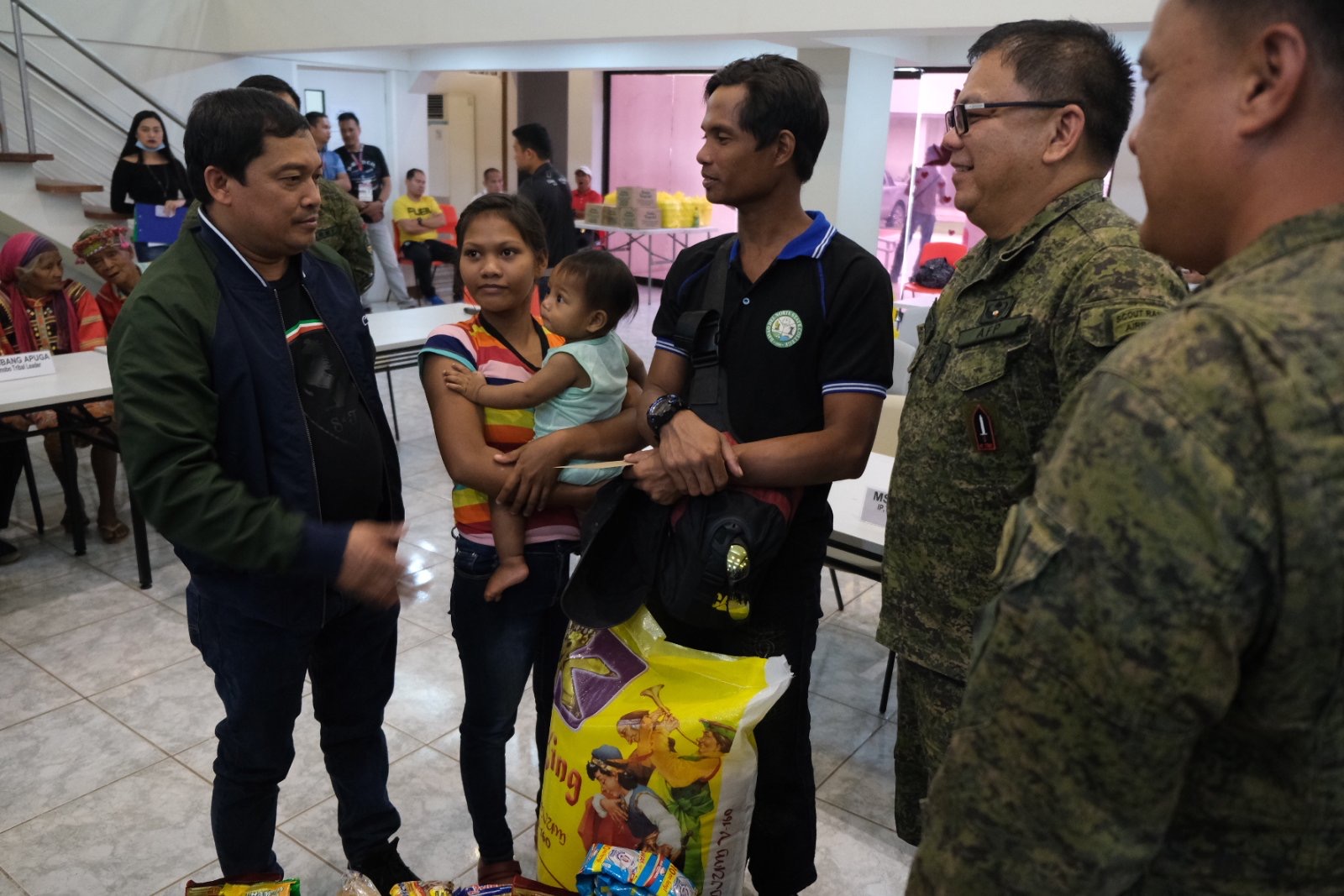 According to OPAPP Assistant Secretary Andres S. Aguinaldo Jr. who handles the National Program Management Office of PAMANA, at least P1.2-billion worth of funds have been lodged with the Department of Social Welfare and Development (DSWD), National Commission on Indigenous Peoples, and Philippine Health Insurance Corporation to implement various socio-economic interventions in beneficiary communities.

The rest of the funds amounting to P500-million will be distributed among local government units situated in conflict-ridden areas in the country.

PAMANA is a complementary track to the political track of the peace process in the country. It aims to extend development interventions to isolated, hard-to-reach, conflict-affected communities to ensure that residents there are not left behind.

“Our main mission here is to alleviate the lives of the people affected by armed conflict, and ensure that these social interventions are sustainable for the succeeding generations to enjoy and benefit from,” Aguinaldo explained.

On Thursday, Galvez flew to the town of Compostela in Davao de Oro to turn-over five potable water system projects worth P20-million, which will provide safe, potable water to 4,000 residents in the villages of Tamia, Mangayon, Osmeña, and Ngan.

Davao de Oro Governor Jayvee Tyron L. Uy said he was very pleased with the completion of the water system projects. Previously, he said residents in these areas had to go to the river to bathe and wash their clothes. People have to endure two kilometers walk to their water for cooking and drinking.

“With these PAMANA projects, the quality of life of residents, as well as the peace and order conditions in our communities greatly improved” he said in the vernacular.

Under the PAMANA 2020 program, the province is expected to receive another P34-million worth of water, livelihood, and electrification projects.

“The effects of these projects and our peace efforts here help finally erase the negative image of our province as formerly known as red areas,” Uy said.

“We are not just changing the name of our province from Compostela Valley to Davao de Oro. Through our initiatives as government servants, we are pro-actively implementing projects and other peace-promoting initiatives in the province,” he noted.

“Our province was  formerly known as a battle scene between government troopers and communist group. But now, we are looked upon as a model of community development,” Uy noted.

“The Duterte administration is serious to resolve the problem in our society,” Uy said, who is also the chair of the Regional Development Council in the Davao region. 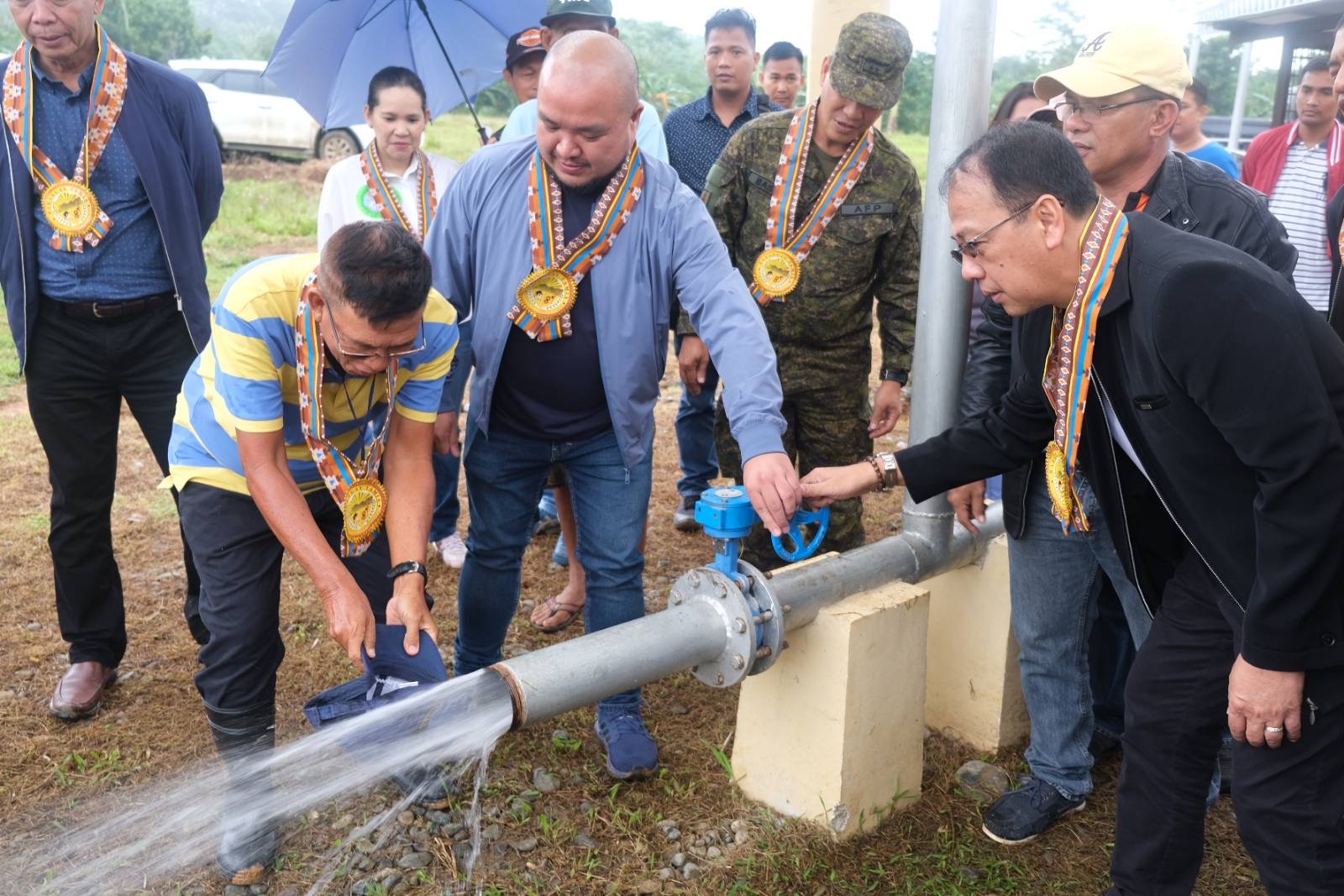 The turn-over of water projects comes just a week after OPAPP and DSWD, through PAMANA, provided three hundred (300) housing units and a multi-purpose tribal center to residents of indigenous peoples (IP) communities in the town of Kapalong in Davao del Norte.

With a total cost of Php 53 million, the PAMANA-funded infrastructure projects were built through the DSWD’s Modified Shelter Assistance Program, and will benefit the people of Sitio Kapatagan and Sitio Kimataan in this municipality known for its thriving agriculture sector.

In the meantime, Davao del Norte Governor Edwin Jubahib and Galvez led the turn-over of immediate assistance packages to six indigenous peoples (IP) families who were rescued by the Davao del Norte provincial government from the Haran facility in Davao City early this month.

Jubaid lauded the 28 individuals who all belong to the Ata-Manobo tribe of Talaingod, Davao del Norte, for their courage to leave Haran where they have been held by the facility’s personnel since last year.

“We know that you want the government to help you – to give you a home and jobs so that all of you will be able to earn a decent living and lead peaceful lives,” Jubaid said in the vernacular as he addressed the victims comprised of men, women and children.

The Haran, which is being run by the United Church of Christ in the Philippines (UCCP), gained prominence over the past several years for reportedly housing around 500 IPs coming from the provinces of Davao del Norte, Davao de Oro (formely Compostela Valley) and Cotabato.

According to a former member of the New People’s Army-Communist Party of the Philippines (CPP-NPA) whose name has been withheld to ensure his security, the Haran is being used by the communist organization as a venue to indoctrinate and bring new members into their fold.

The once CPP-NPA member bared that this effort is part of the CPP-NPA’s strategy to discredit the government by making IP communities in Mindanao believe that it is “irrelevant” and is not doing anything to protect their rights and uplift their welfare. The CPP-NPA-NDF fronts created a perception continuous IPs oppression, militarization and government’s neglect.

From 2013 to 2015, he said the Reds launched a campaign called “Taktikang Bakwit” where it instructed leaders of the peasant group PAsakada-I, SAlugpongan, KAlimodan (PASAKA)  to “influence, organize and recruit” members of IP communities.

In 2015, the ex-CPP-NPA cadre brought an estimated 700 IP members from Talaingod to the Haran. It was there where he established a Salugpungan school and began to indoctrinate the people on the communist ideology and eventually, convincing them to support the armed struggle.

Based on testimonies of the rescued victims, the living conditions in Haran were very difficult. The bunkhouses where they stayed were so small they slept like sardines. Food was also very limited and there were a lot of instances when they missed their meals.

“The allegations of the rebels that the IPs are being ignored, left out by the government, are all lies.  You have now seen the kind of assistance the government provides to your communities,” Jubahib said.

“We in the provincial government have given what you have asked for – a new access road, potable water systems, electrification, schools so that your children can study. We will deliver all of these services to your communities,” he added.

In light of these efforts, Jubahib said that there is no longer any reason for the people to leave their families and join the armed rebellion, as he asked the rescued victims to help the government convince members of the rebel group to return to the folds of the law.

“We are therefore asking all of you to help in our campaign to convince our brother and sisters to go down the mountains so that they will receive assistance from the government,” Jubahib said.

The governor emphasized that it is the vision of President Rodrigo Roa Duterte to finally put an end to the decades-long armed rebellion and bring enduring peace and sustainable development across the country.

“What President Duterte wants is to put an end to the armed rebellion because he no longer wants to see bloodshed. What he wants is to support and provide all your needs so that your lives will become better,” Jubahib said.

“We know that what you are asking for are very basic. You are not asking for mansions. What you would like is for your children to go to school, for you to be able to work, be able to plant in your ancestral domains, and be able to eat three times a day,” he added.

Have faith in government

Galvez, for his part, dispelled the allegations being peddled by the communist rebels, while assuring IPs that the government is working very hard to address the situation in their communities and more importantly, improve the economic well-being of residents there. 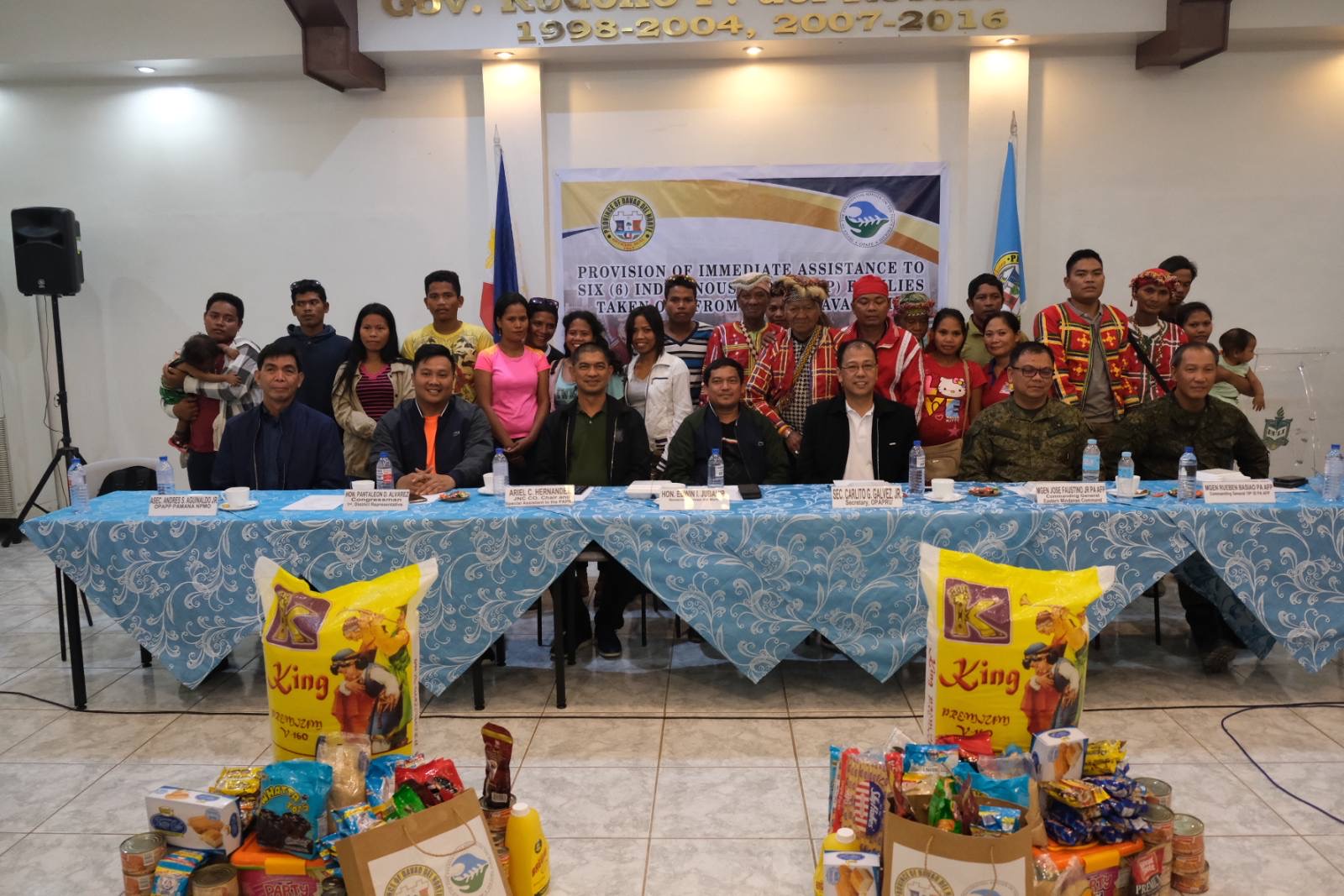 “The military is not your enemy. It will not do anything to harm you. They are there in your communities to protect you and ensure your security,” he said.

“It is also not true that the government has turned its back on the IPs. In fact, it is doing everything possible so that all our Lumad brothers and sisters can have a better and comfortable life,” Galvez added.

This is the reason, he explained, why the government is implementing the Whole-Of-Nation Approach under Executive Order No. 70, wherein there is now greater synergy among national line agencies in the delivery of programs, projects and services.

“Do not let the rebels destroy your faith in the government. Everything that the group is doing is meant to promote its own self-interest, and its twisted and outdated ideology,” Galvez said.

He pointed out that a lot of people have sacrificed their lives in the belief that armed rebellion is the only way to address the problems they were confronting, adding that “it is time to put an end to this kind of mindset.”

Galvez called on the rescued victims to help the government convince those who are still staying in Haran to leave the facility and start a new life, as they have the power in their hands to change their current conditions for the better.

He also committed to help provide jobs for IPs in the province through the PAMANA Program, citing the successful experience of the Cordillera Bodong Administration-Cordillera People’s Liberation Army (CBA-CPLA), a CPP-NPA rejectionist group.

Aside from hundreds of CBA-CPLA members being integrated into the Armed Forces of the Philippines, 500 of them have been by the hired Department of Environment and Natural Resources (DENR) as forest rangers who have been tasked to take care of our remaining forest and protected areas.

Galvez said the IPs in Davao del Norte can also benefit from the same program, as he vowed to work closely with the provincial government and DENR and contribute to the National Greening Program.

He likewise thanked the provincial government of Davao del Norte led by Gov. Jubahib for prioritizing the needs of IPs in the province, and for serving as a good example for other local government units to follow.

“The Duterte Administration will remain by your side as you work towards providing a better life and creating a brighter future for your people,” Galvez said. ###