STATEMENT OF CONDEMNATION OF PRESIDENTIAL PEACE ADVISER CARLITO G. GALVEZ, JR. ON THE RECENT ATROCITIES COMMITTED BY THE COMMUNIST PARTY OF THE PHILIPPINES- NEW PEOPLE’S ARMY AGAINST THE FILIPINO PEOPLE

The Office of the Presidential Adviser on the Peace Process strongly condemns the recent spate of attacks perpetrated by the Communist Party of the Philippines-New People’s Army (CPP-NPA) against the Filipino people.

Based on reports, the Malayag Guerilla Front murdered Datu Sammy due to his vocal stand against the aggressive recruitment being carried out by the CPP-NPA in the community.

In Surigao del Sur, members of the NPA also seized Taloy Aguilo Astudillo and another Manobo identified only by his family name ‘Bibat’ from the village in Sitio Inadan, Magroyong, San Miguel, Surigao del Sur on Dec. 3, 2019.

The Indigenous Peoples Mandatory Representative of the municipality of San Miguel has sought the help of the government to locate their missing tribe members.

Meanwhile, on December 30, around 30 heavily armed members of the CPP-NPA burned an IP livelihood center in Barangay Panansalan in Compostela, Compostela Valley.

Clearly, these acts of terrorism are meant to instill fear, anger and hatred in the hearts and minds of the people, particularly among our Lumad brothers and sisters.

By and large, these attacks run counter to the cessation of hostilities declared between the Reds and government during the holiday season.

With the ceasefire agreement, the Duterte administration had opened a window of opportunity in which the stalled peace negotiations with the National Democratic Front (NDF) could move forward.

However, we cannot talk peace when there is a lack of sincerity from the other party. The government had already walked the extra mile not once but several times as a sign of goodwill.

But we have yet to see this same level of sincerity on the part of the rebels. Aside from the yuletide ceasefire they issued, there has to be another concrete sign of reciprocity from their side.

First, the killings must stop. We cannot sit across the negotiating table if innocent civilians continue to be slaughtered and government troops are perennially being ambushed.

And second, the insurgents must set aside their weapons and cease from carrying out other acts of lawlessness such as extortion, rape, and destruction of public and private facilities.

For the peace negotiations to happen, there is a need to create a conducive environment where both parties can face each other, confident that each one will keep their word, and most importantly, no innocent lives will be lost.

In short, we must walk our talk.

The ball is now, so to speak, in the hands of Mr. Sison and the rest of the NDF leadership.

This is now an opportunity for him to show to his followers – and to the rest of the Filipino people – his honest desire to find a peaceful, long-lasting solution to the communist insurgency.

Mr. Sison has nothing to fear. The President has given his word that the rebel leader will not be arrested if he decides to return to the Philippines.

The CPP-NPA-NDF should realize that their outdated ideology is fast losing support. Ironically, those areas wherein the communist group operates in, particularly in Samar, Bicol, and Negros, have remained mired in poverty since the development of communities is being stunted by extortion, ambuscades and the burning of equipment and development projects similar to what they did in to the Indigenous People’s Livelihood Center in Davao de Oro province.

The government’s position is clear: to put an end to the long-standing armed conflict through the demobilization of the armed group of the insurgents. If the leadership of the communist group cannot reciprocate the sincerity shown by the Duterte Administration, then there is no reason for the government to engage Mr. Sison since he himself has no moral high ground to demand such recognition.

Too much blood has been spilled in this armed rebellion that has lasted more than five decades, spanned several administrations, and claimed the lives of thousands of innocent civilians.

Let us begin by taking that leap of faith, and making sure that no child will ever lose their father or mother through the barrel of a gun. ### 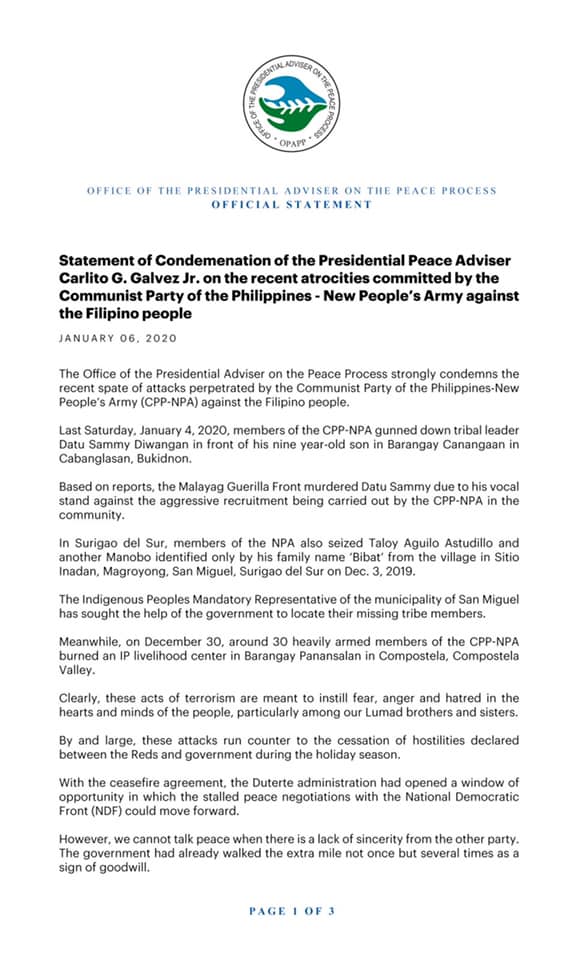 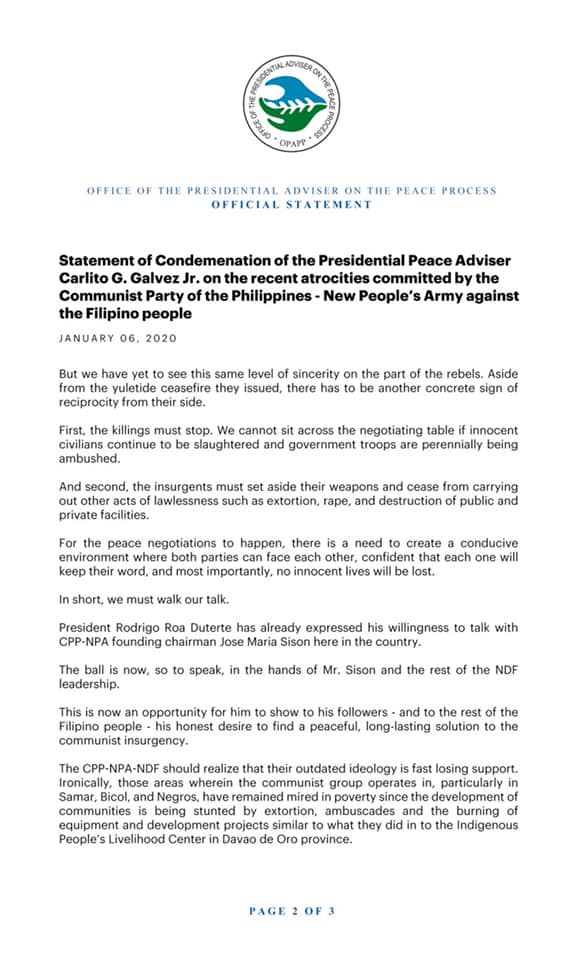 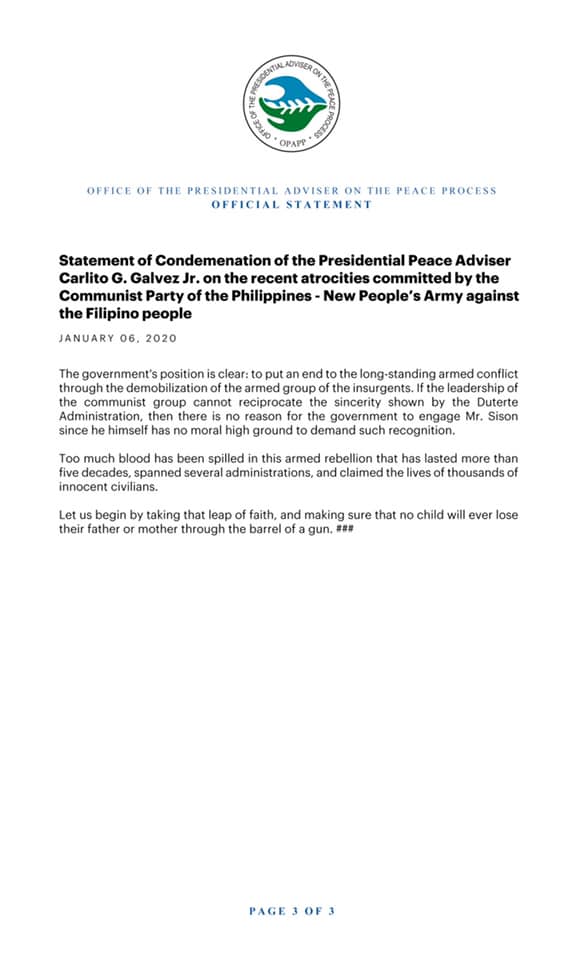